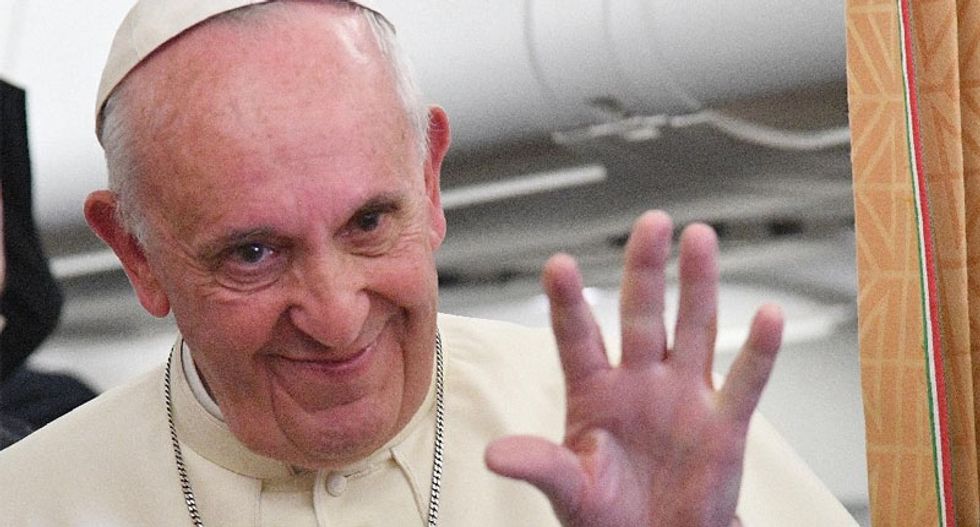 Pope Francis speaks with journalists aboard a plane during his flight from Baku to Rome, on October 2, 2016 (AFP Photo/Luca Zennaro)

Pope Francis has said teaching children gender theory in schools was an "insidious indoctrination", even as he insisted he had always treated homosexuals and transsexuals with respect.

"It is one thing to have homosexual tendencies or a sex change," the pope said in comments to journalists made on board the papal plane after he wrapped up a three-day tour in the Caucasus and headed home to Rome.

"But it is another thing to teach it in schools."

Trying to "change attitudes" like this is "ideological colonisation," the pope said, building on comments he made Saturday in Tbilisi, when he argued that gender theory was part of a "global war" on traditional family values and marriage.

Gender theory is, broadly speaking, the idea that while people may be biologically male or female, they may choose to identify as male or female -- or both or neither.

When asked about his attitude to homosexual or transsexual people, Pope Francis repeated his call that they should be welcomed, accepted and integrated into society as much as possible.

"I accompanied people with these tendencies, with homosexual practices, I brought them closer to the Lord," he said.

"Some were not able (to follow the church's teachings), but I never abandoned one of them," he said.

The pontiff, who took the papal name Francis in homage to Saint Francis of Assisi, the Christian friar devoted to the downtrodden, told reporters about a Spanish person who had a sex change to become a man and then married a woman.

A local priest told the couple they would "go to hell", which caused them great suffering, but after they wrote to Francis, the pope received them and treated them with dignity, he said.

"Life is life, and things should be taken as they come," the pope said.

"Please don't write that the pope will sanctify transsexuals. I can see the front pages of papers now," he added.

"It is a moral question, and it must be resolved as best as possible, always with the mercy of God."

Earlier in his papacy, Francis famously said "who am I to judge?" about homosexuality but in April this year refused to recognise same sex couples in new Church guidelines on family life.