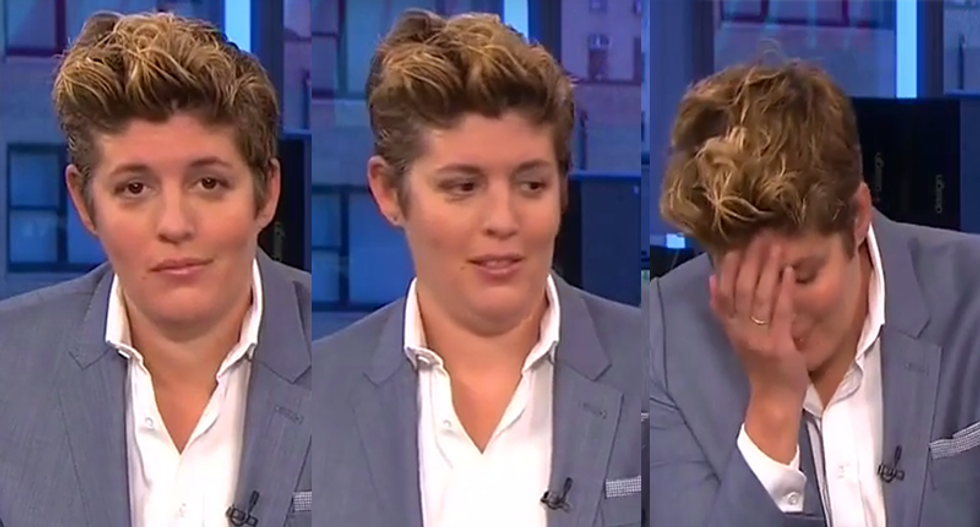 The many faces of Sally Kohn (Photo: Screen capture)

CNN pundit Sally Kohn wasn't having any of it the Monday morning after the debate.

When faced with Trump surrogate Betsy McCaughey, who proclaimed Trump won over the women he needed to get elected, Kohn was rendered speechless.

"I think that creating this separate little event before the debate kept the issue of the treatment of women off center stage," McCaughey said, seeming to forget Trump brought the women to the debate and named them from the debate stage. McCaughey's reasoning is that Trump was able to talk about the difficult issues facing the country.

CNN host Carol Costello was confused, noting that the first 15 minutes of the debate were dealing with the last several days of Trump's statements caught on video.

"It was his doing, he said them," Kohn jumped in.

McCaughey tried to argue that Clinton has failed because she's running a campaign on political correctness. "She has said she's going to make sure that men talk respectfully to women. That whites are taught to show more humility in the presence of blacks. That chubby beauty queens won't be fat shamed. That illegal immigrants will feel welcome. And that people who disagree with her will be labeled bigots, racists, homophobes, xenophobes and other deplorable names," McCaughey said.

Costello asked if McCaughey was okay with the words Trump used on the bus, she agreed that it was nothing more than "locker room talk" and that it was acceptable because it isn't politically correct.

Kohn was shocked. "Um, I...I, you know, I... I find myself a little speechless at the moment," she said before launching in against McCaughey. "Donald Trump repeatedly was asked very clear very simple questions about his strategy for how he would replace Obamacare. How he would deal with ISIS. How he would address tax issues. And he did not answer the questions. He just kind of vomited a word salad all over the place."

She went on to point out that we are all talking about sexual assault, women, misogyny, discrimination and prejudice is because of Donald Trump himself. "Because he keeps bringing it up. because he keeps doing insane things that are beyond the pale," she said.

Costello brought up the numbers for Trump on women, saying that women don't like the way that Trump talks about women.

"Not just talks but treats," Kohn cut in.

McCaughey tried to disagree, but Costello was quick to silence her. "No, no, they don't. That's why they're not on his side at the moment. Especially those suburban educated republican women that normally go -- that normally vote republican and are not this time around."

She explained that they're confused because Trump appears with these women whom he trashed back in the 1990s. A video surfaced over the weekend of Trump calling Paula Jones ugly and a loser back in 1998. He then goes on to say in the video that the whole group of accusers are "an unattractive cast of characters."

Kohn was quick to point out to McCaughey and the media on the whole, that former President Clinton's name isn't on the ballot in November.

McCaughey reverted to her claim that political correctness was running amok and Clinton's television ads are pointing fingers at people because she didn't like the way that they talk.

"Her ads are his own words!" Kohn exclaimed. "She is quoting his own words and he says they're nasty because his words are nasty. I'm sorry, when does this stop?"

McCaughey tried to dismiss it as an issue that no one cares about but Kohn persisted that women do talk about this issue and about the way Trump talks about women.

"It's not just Donald Trump's words," Kohn said. "He bragged about forcing himself on women. He bragged about sexual assault. By the way, if we want to talk about accusers, there are women who have stepped forward repeatedly, there are active lawsuits to back up those claims. Not just words. Let's stop trivializing, let's just stop trivializing it as words. We are talking about his actions and his actions aren't just offensive. They are criminal. They are criminal."