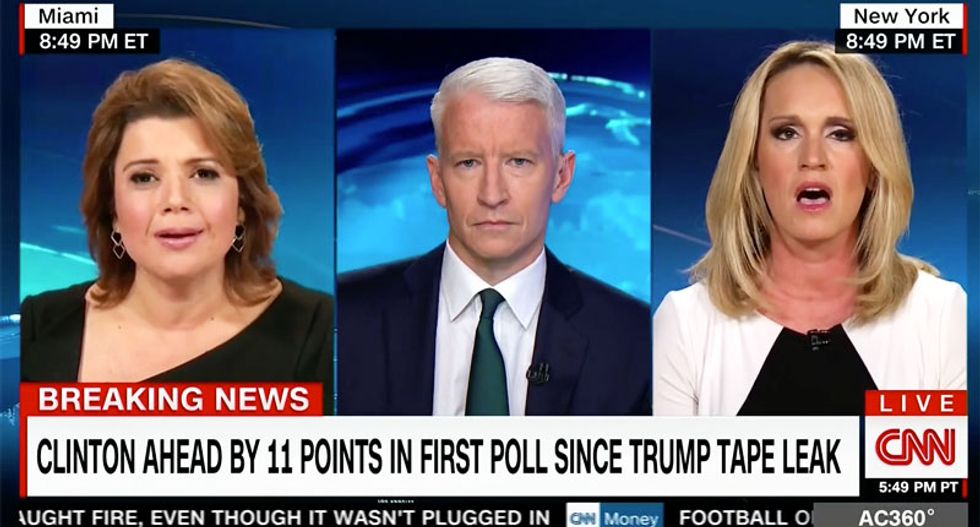 In yet another face-off between GOP consultant Ana Navarro and Scottie Nell Hughes, the Trump-backing Tea Partier offered up a bizarre defense of the GOP nominee describing grabbing an unsuspecting woman's "p*ssy" -- which Navarro promptly hit out of the park with a brilliant comeback.

Host Anderson Cooper asked Hughes about Trump's grotesque description of sexually assaulting women, saying, "Let me ask you about that. Where have we made it okay to talk like that?"

"Unfortunately, we've made that to be a culture, a "50 Shades of Grey" culture in today's society," Hughes responded. "Men can talk like that. There's nobody on that bus, as we've seen today, with someone [Billy Bush] losing their job over being suspended. 80 million copies of "50 Shades of Grey" was sold. "Magic Mike" was one of the most popular movies."

"I didn't read the book but I assume that was a consensual relationship, " Cooper admitted.

"No, it was not all the time," Hughes shot back. "The things that were done were not. You look at the vampire trilogy, pop culture itself has become very stretched in these areas. This is just a part of it, if you read anything from Sports Illustrated to Playboys, sex, unfortunately, sells."

Hughes added that it makes her "crazy " when she hears women talk to other women using foul language.

Given a chance to respond, Navarro was primed and ready.