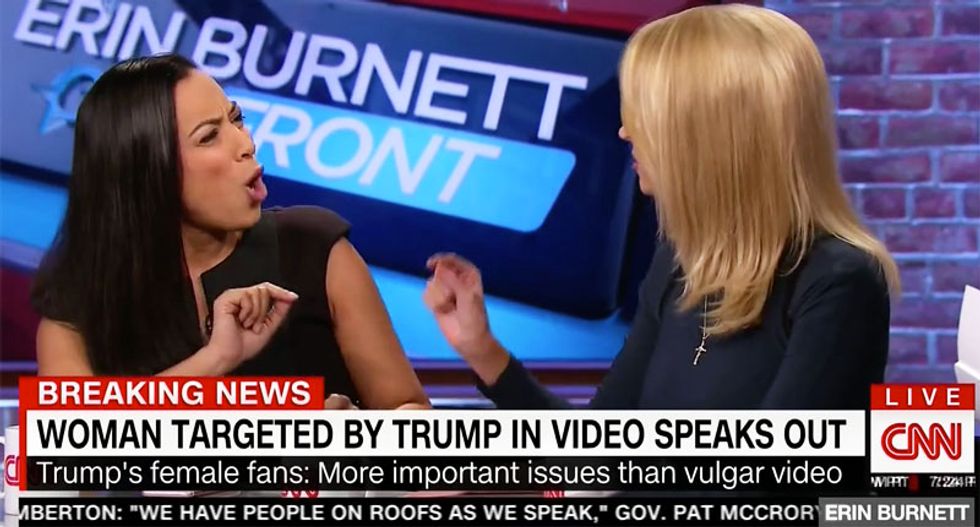 A discussion on why some Republican women voters are sticking with GOP presidential nominee Donald Trump turned into a shouting match when Trump advocate Kayleigh McEnany attempted to pin the blame for former President Bill Clinton's affairs on Hillary Clinton.

Appearing on Erin Burnett's OutFront, CNN regular Angela Rye began talking about Trump's video comments -- where he admitted that he has sexually abused women -- by describing how the law specifically defines sexual assault.

"Just so ironic," McEnany parried. "The selective outrage that the left is okay with Hillary Clinton who put private investigators on people who had viable sexual assault claims, it's selective outrage."

Turning back to McEnany attempting to pin the sins of Bill Clinton on the Democratic presidential nominee, Rye stated, "That's rape culture. Kayleigh! You're blaming someone who succumbed to someone committing adultery on her. We're Christians. Let's talk about what that is!"

As McEnany talked over Rye by shouting, "She was accused of facilitating it last night and she was definitely silent," a frustrated Rye finally had enough, yelling back, "Kayleigh, you're wrong! You know why. It's f'ing ridiculous, dude! It's so ridiculous."