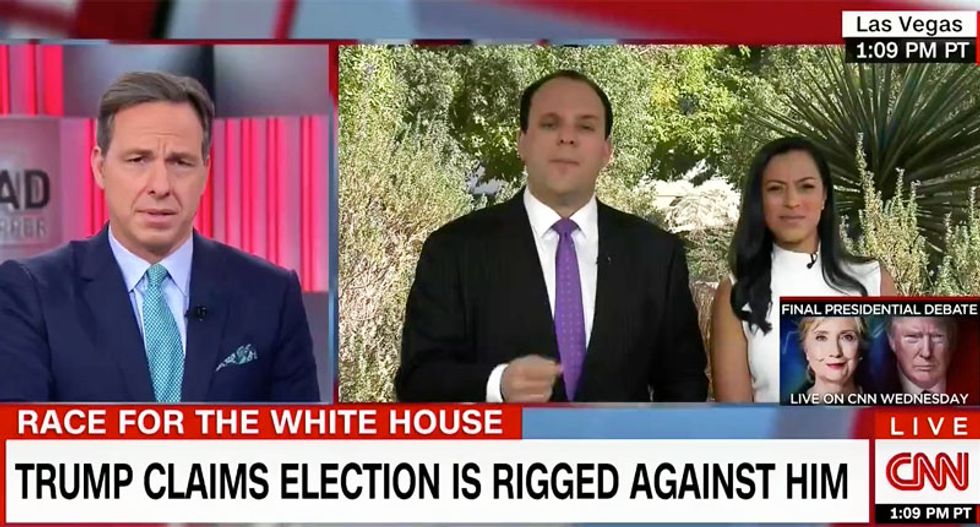 Keeping with the Trump campaign's assertion that voting in the U.S. is "rigged," a spokesperson for GOP presidential nominee Donald Trump told a stunned Jake Tapper that President Barack Obama may have stolen North Carolina's electoral votes in 2008 via fraud.

Appearing on CNN's The Lead, Trump senior adviser Boris Epshteyn presented a two-pronged attack on what he called a "rigged system."

"What Mr. Trump and our campaign are talking about is the rigged system in two ways," Epshteyn began. "One, in terms of the media. 96 percent of donations, contributions in this cycle by the media are going to the Clinton campaign."

'Listen, Jake, to be fair, those are the numbers that we have," Epshteyn dodged. "There are other numbers out there that refute that? We'd love to see them."

Turning to actual so-called vote rigging, Epshteyn started throwing out disputed or exaggerated numbers as he made his case for voter fraud.

"Numbers by Pew show that 40 percent of people who are not citizens are registered to vote," the Trump spokesperson explained. "People who are dead voting in Colorado. Those are the kind of instances, the kind of voter fraud, we want to make sure that does not happen."

Epshteyn then went a bridge too far for Tapper and guest Angela Rye.

"Boris, where are you getting that from?" an incredulous Tapper shot back. "Barack Obama won in North Carolina because of voter fraud?"

A laughing Rye added, "It's outrageous."

A resigned Tapper moved on, asking Epshteyn is Trump would accept the results of the election refusing to even bother to dignify the comment.

With rainbow flags and "OneLove" armbands, World Cup fans have protested against host Qatar's anti-LGBTQ policies, but many queer Arabs fear a Western solidarity push could do more harm than good.

Gestures in support of the local LGBTQ community have unleashed a torrent of homophobia, activists and community members say, creating new risks for people who have long relied on discretion to survive.

Amanda Marcotte, Salon
On Tuesday afternoon, when word came down that the jury in the Oath Keepers trial in Washington, D.C., had already come to a decision, the speed suggested that the defendants were doomed. So far, this has been the most complicated of all the criminal proceedings stemming from the insurrection that Donald Trump incited on Jan. 6, 2021. Most people charged with crimes after storming the Capitol on that fateful day have faced simple charges, such as obstructing government proceedings and trespassing. But for this case, the Department of Justice was asking the jury to convict the defendants on a range of criminal charges, with the most serious being seditious conspiracy, which is notoriously difficult to prove.

Under the circumstances, legal reporters repeatedly warned audiences not to assume that the five insurrectionists on trial in a D.C. federal court would actually face punishment for their crimes. But despite all the moving parts and complicating factors, the jury spent only three days deliberating, a relatively brief period under these charged circumstances. That suggests the jurors were not distracted by political pressures or the various imaginative deflections offered by defense attorney. Sure enough, both Oath Keepers founder Stewart Rhodes and his right hand man, Kelly Meggs, were found guilty of seditious conspiracy, and all five defendants were convicted for obstructing an official proceeding and destroying evidence. Meggs and two other defendants, Jessica Watkins and Kenneth Harrelson, were also convicted on various conspiracy charges.

Although three of the five defendants were acquitted of the sedition charge (and Rhodes was found not guilty on two conspiracy charges), this verdict should be understood overall as a resounding victory for the prosecutors. Perhaps most important, it shows that juries of ordinary citizens are fully capable of understanding the evidence that what happened on Jan. 6, 2021, was not a spontaneous riot but a preplanned insurrection. As former federal prosecutor Randall Eliason told the Washington Post, "The jury's verdict on seditious conspiracy confirms that January 6, 2021, was not just 'legitimate political discourse' or a peaceful protest that got out of hand. This was a planned, organized, violent assault on the lawful authority of the U.S. government and the peaceful transfer of power."