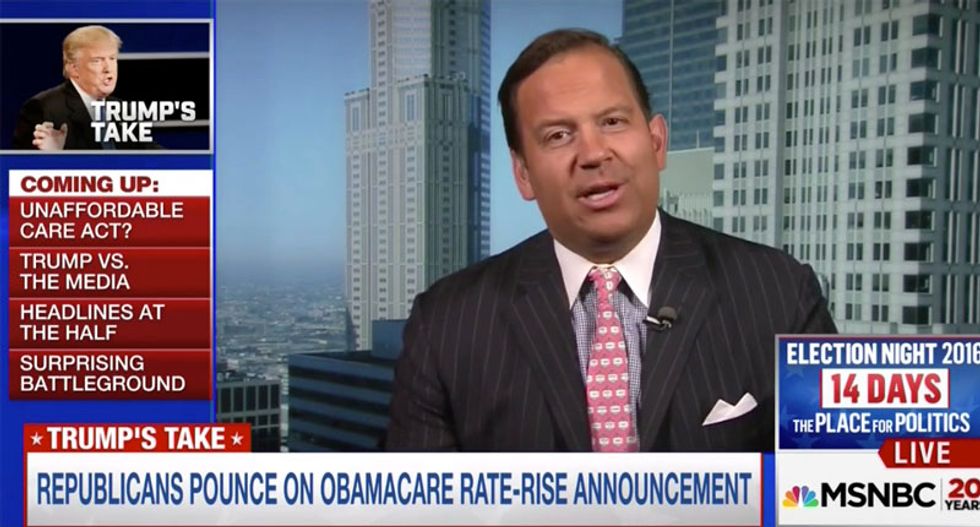 Appearing on MSNBC, one of GOP nominee Donald Trump's staunchest supporters joined with the candidate to call for the repeal of the Affordable Care Act, only to offer a vague suggestion to replace it with "federalism."

The Obama Administration has spent the day defending Obamacare after it was revealed that premiums would rise next year, causing Trump and his spokespeople to raise it as a campaign issue in an effort to stem his decline in the polls.

Trump advocate Steve Cortes was dispatched to MSNBC to talk about Obamacare, but came armed with only the vaguest of suggestions should it be repealed.

Pressed by host Steve Kornacki to defend Trump's comments to "scrap the whole thing," Cortes took a stab at what might replace it under a Trump presidency.

"You're giving me the repeal argument," Kornacki asked. "You said 'repeal and replace.' What do you replace it with?"

"Right, great question," Cortes replied." We replace it with federalism. Federalism works. The same thing we want for school choice, by the way, where we go to empower minority children and poor children of any color to go to the schools of their choice and not be trapped within often failing public school systems -- similarly in insurance. In health insurance. We want the states to be free to experiment, to be laboratories of democracy and they at the local and state level can decide what works best."

In fact, Obamacare provides subsidies at the federal level and allows consumers to use those to shop for the best insurance policy through state exchanges, with the federal government managing the exchanges in half of the states.