Trump attacked Herman Cain’s sexual harassment accusers in 2011: They did it for ‘free fame’ 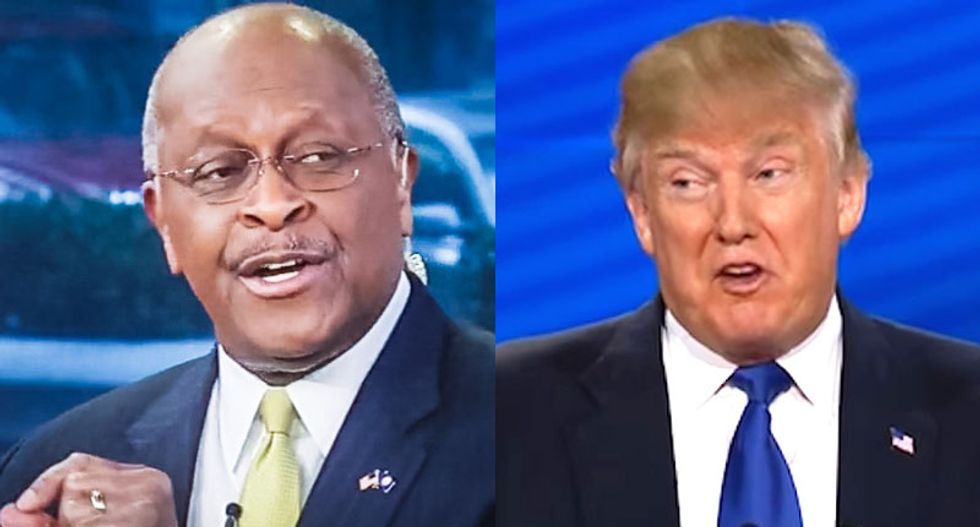 Republican nominee Donald Trump can't erase his history, and it has been flooding back into the spotlight in recent weeks. The Washington Post seems to have opened Pandora's Box with their tape revealing Trump bragging to Billy Bush about sexually assaulting women, because the receipts are coming out one by one.

On Friday, CNN reported how in 2011 Trump defended Herman Cain — a Republican presidential candidate at the time — when he was accused of sexually harassing his employees and having a 13-year affair. Cain denied the claims, but ended his campaign all the same.

During an interview with Fox News host Greta Van Susteren in November 2011, Trump said the women who had accused Cain did it for "free fame," although as CNN notes, neither of Cain's accusers had revealed their identity at that point.

Trump said, "They probably do love their names splashed across the front pages. And frankly, that's not a good situation and I don't think it's a fair situation." He continued, "And I think Herman should take very, very strong action, even if he has to bring a major lawsuit against the women."

In recent weeks, Trump has been accused of sexual assault and harassment by at least 11 women. He has vehemently denied all allegations, while also smearing the women who have accused him — at rallies, in the media, during debates, and on Twitter.

Why didn't the writer of the twelve year old article in People Magazine mention the "incident" in her story. Because it did not happen!
— Donald J. Trump (@Donald J. Trump) 1476364185.0

The Republican nominee defending Cain in 2011 is not his first time serving as an apologist of gendered violence. In 1992, Trump came to boxing star Mike Tyson's defense, suggesting he was the true victim of his rape conviction. Trump explained how Tyson was never the same after.

Cain dropped out of the Republican race for the White House on December 3, 2011, though he continued to deny the allegations. He reportedly ended his campaign because of the "continued hurt" the allegations had caused his family.

There is something incredibly important to understand in terms of the racial identification of these two men. Cain, a black man, was forced to end his campaign amid sexual harassment allegations.

On the other hand, Trump is still standing strong as a white male Republican presidential candidate, accused of sexually assaulting various women. Plenty of his supporters continue to back him, even though his violent misogyny has only become more glaring.