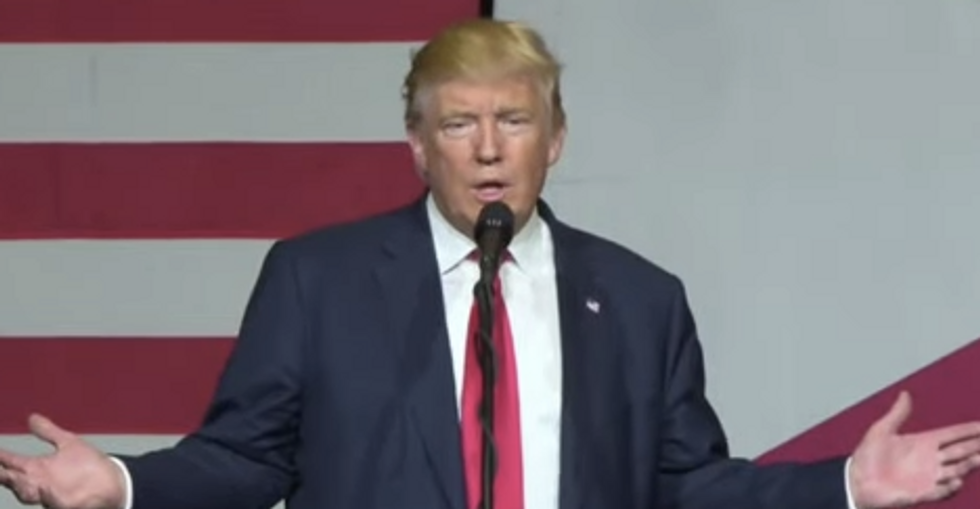 Donald Trump lashed out at global elites who undermine American sovereignty through "international banks" -- and many observers couldn't help but notice the underlying anti-Semitic message.

The Republican presidential candidate flatly denied recent reports of women claiming he'd sexually abused or assaulted them after the release of a 2005 recording that showed Trump boasting about getting away with grabbing women by the genitals because he was rich and famous.

During the speech in Palm Beach, Florida, Trump threatened to sue the New York Times, which published some of those accounts, and he agreed with his supporters' call to arrests and imprison his Democratic rival, Hillary Clinton.

He accused Clinton of being “the vessel (of) a corrupt global establishment that’s raiding our country and surrendering the sovereignty of our nation.”

Trump portrayed the Nov. 8 election as an apocalyptic choice.

"This is not simply another four-year election," he said. "This is a crossroads in the history of our civilization that will determine whether or not we, the people, reclaim control over our government. The political establishment that is trying to stop us is the same group responsible for our disastrous trade deals, massive illegal immigration, and economic and foreign policies that have bled our country dry."

“This election will determine whether we remain a free country in the truest sense of the word or we become a corrupt banana republic controlled by large donors and foreign governments,” Trump said. “The election of Hillary Clinton would lead to the destruction of our country.”

Many internet users were alarmed at Trump's language, noting its reliance on anti-Semitic themes and more suited to a fascist dictator than a presidential candidate.

Whenever I conclude nothing Trump can say could shock me, he ups the ante. Today he went full-tilt Mussolini. Is quoting Hitler next?
— FactsMatter (@FactsMatter) 1476383088.0

@realsaramerica There is so much that's grotesque about Trump it's hard to keep track but why isn't anyone calling out anti semitism?
— Ken Borsuk (@Ken Borsuk) 1476380128.0