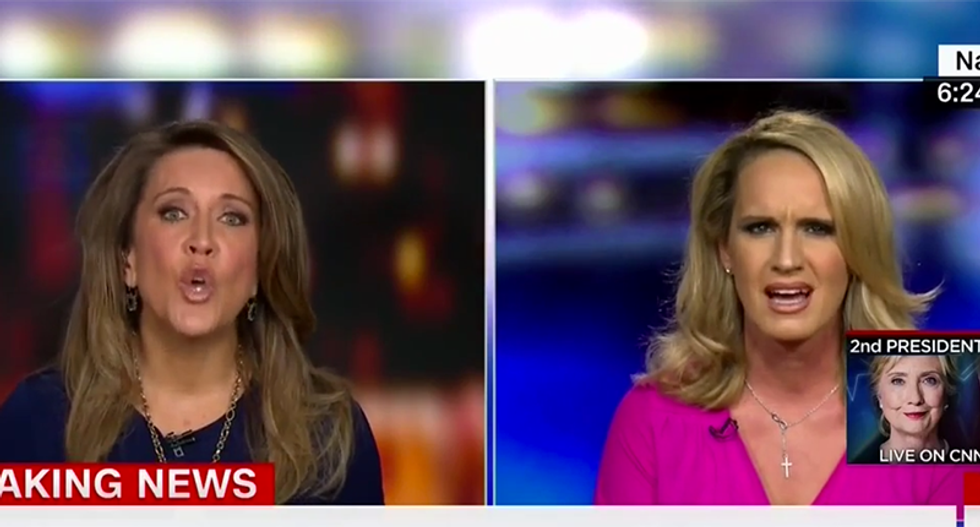 Donald Trump's surrogates are having a tough time spinning the recent revelation that Trump advocated grabbing women by their genitalia and forcing himself on them.

Scottie Nell Hughes tried to spin to blaming Hillary Clinton for Benghazi instead of talking about Trump's words and the way he has historically treated women. "Well, those words are horrendous. They are appalling. They are dreadful. They are foul. But I'll say this. The words for Donald Trump 11 years ago are bad. But not near as bad as Hillary Clinton since she's been in office."

CNN host Erin Burnett wasn't having any of it. "I understand what you are saying do Scottie. But I have to ask you, has anything changed for you when you hear this about Donald Trump. Is it different this time?"

Not surprisingly, she said no.

Democratic surrogate Maria Cardona simply felt bad for all of the surrogates who had to spin this into something.

"I really do feel for my colleague Scottie, my colleague Corey and all of the Trump supporters who have to come on and really defend the indefensible," she said. "And we've all said what he's done up until now and even not counting this has been indefensible. The problem with this is that Trump supporters love to say he's running for office and people support him because he speaks from the heart. Yes, that is exactly right. He does speak from the heart. And that is what should scare everybody to our core."

Unlike before when there were accusations and unsubstantiated gossip, this is on video and audio and people are hearing it from Trump's own mouth. Cardona said this is America seeing Trump for who he really is.

"We have heard him now what is in his heart, what is deeply in his heart. What he talks about when he thinks the microphones are not hearing him. And as a mother, as an immigrant, as a Latina, when I heard this story, democratic strategist and Hillary Clinton supporters aside, it's made me nauseous. Made me want to go home and cling to my 9-year-old daughter with the thought that this is a man, who by the way is now an irredeemable pervert, a predator who is seeking the oval office, who wants to be our commander in chief and represent this country around the world, who will be somebody who supposedly should be a role model."

Scottie Nell Hughes audibly gasped at the accusation that Trump was a pervert and predator.

Watch the whole video below: