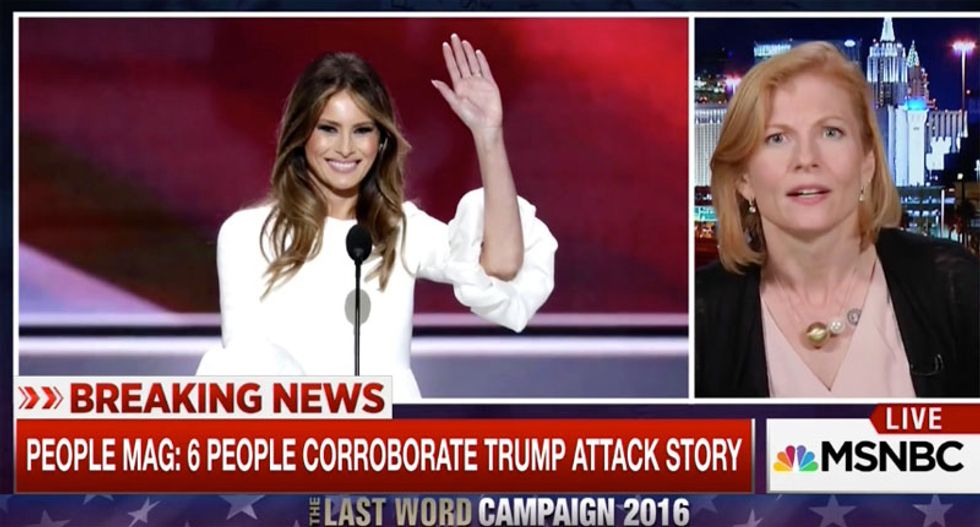 While many commentators stepped carefully around Melania Trump's comments in an interview on CNN Monday night, writer Ana Marie Cox focused like a laser on statements made by the GOP nominee's wife attacking his many female accusers who say he sexually assaulted them.

Appearing on MSNBC's The Last Word with Lawrence O'Donnell, Cox was clearly disturbed by what she heard in the interview.

"I do want to say Melania's statements are incredibly disturbing, on one level more disturbing than some of the things Trump has said," she began. "It's things like what Melania Trump said that really keep them from reporting stuff like this. It's the idea about another woman not believing you -- another woman saying 'Well, other women come on to my husband all the time,' as though that would mean your husband didn't assault other women."

"Her statement about not be being pretty enough. It's really disheartening and kind of disgusting," she said.

"Melania is just out of hand calling every one of these women a liar, that absolutely none of this happened," host O'Donnell added. "That is her position. they're all lying. And then she goes beyond that to then dictate the terms by which these women can make these accusations. They can only make them in courtrooms. they can only make them, I don't know, if they have video or something. I'm not sure what standard of proof she would require, but certainly, the eyewitness testimony by the victim is completely dismissable as far as Melania Trump is concerned."

"Yeah, fingerprints, maybe that's what she's looking for, a stray hair or two, which, you know, to be honest, maybe that is something you could find," Cox said with a knowing smirk indicating Donald Trump's distinctive hair. "I think she's obviously dismissive and playing on this trope that, well, women just fall all over my husband, like they assert themselves, that was the other part of her statement, this idea that women come up and give Donald Trump their number in front of her, so that somehow makes it okay. And I know you talked about the unattractiveness argument before, but this is particularly loathsome, I feel like coming from another woman and coming from someone who should .... well, maybe I won't continue."