WATCH: Ana Navarro schools Trump's Hispanic advisor why his outreach to Latinos has been a big failure 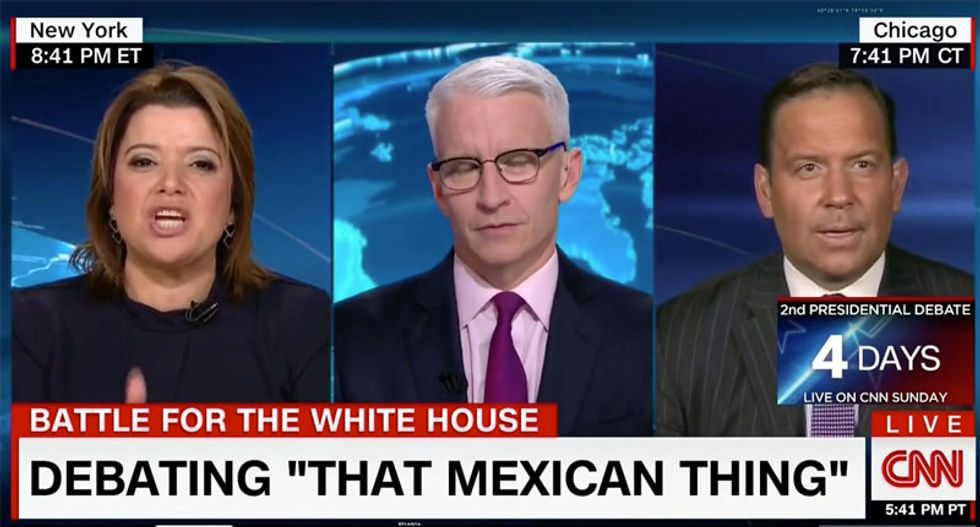 Appearing on Anderson Cooper's AC360 with Trump booster Steve Cortes, Navarro began with a little biographical information about herself.

"I came to this country legally. I came by plane. I did it legally," she began. "But I also understand, and I think most Latinos have the empathy to understand that, but for the grace of God there go I. I came as an eight-year-old girl, but could very well have been a Dreamer girl, had not my parents not had the money to hire lawyers and make me legal the way they did. I could have been one of those girls who found out when they were 19 and going into college that I was illegal."

She then tore into the Trump campaign, saying " this campaign has preyed on Latinos, has preyed on immigrants. has made it a pillar of their campaign to attack Hispanics and attack immigrants and make it one of the things they stand, so on they don't get the benefit of the doubt."

"Donald Trump has made it so since June 16th when he first announced and he called Mexicans 'rapists,'" she said, her voice rising. "It wasn't me, Steve. It was Donald Trump who went on the attack against Mexicans from day one of this campaign!"

Cortes attempted to discuss the  illegality of undocumented immigrants, only to pulled up short by host Cooper who told him, "Steve, Ana is talking about language that your candidate -- the candidate you are supporting -- has used. When you hear some of the language he's used, do you have any problems with it?"

Cortes conceded that he didn't care for the Trump's "tone" early on in the campaign but said the campaign was doing its best to "convince voters of color, whether Hispanics or African Americans, that the Democratic Party has taken you for granted."

"There is a reason why your Hispanic advisory council has shrunk every day!" she lectured. "They are ashamed of the words that Donald Trump has used, and you should begin by not calling us voters of color and understanding that African Americans, Muslims, we are all different people with different priorities and different issues."