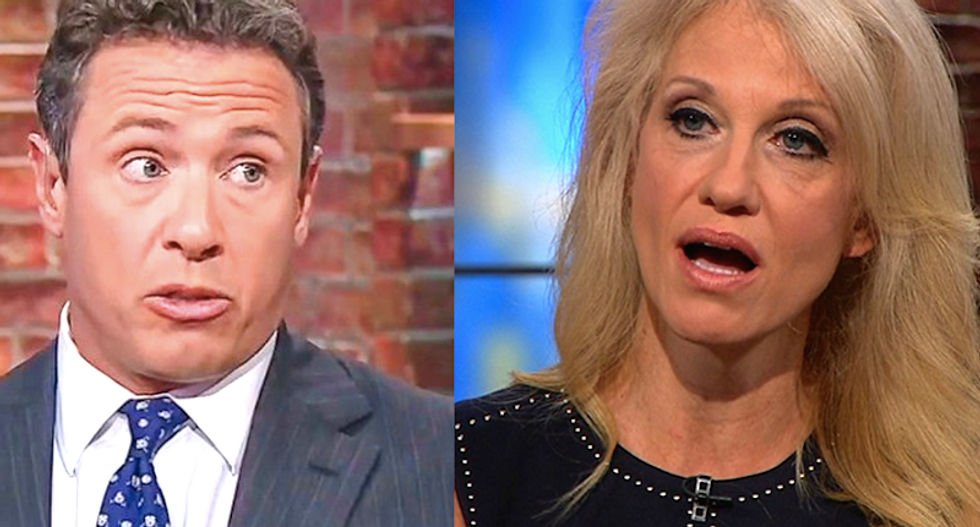 Kellyanne Conway made the rounds Thursday morning to mop up the mess after Donald Trump threatened to upend American democracy if he loses the Nov. 8 election.

The Republican presidential nominee said Wednesday night during the third and final presidential debate that he hadn't decided whether he would accept the results if he lost, saying he would keep voters "in suspense."

Conway, his campaign manager, has been comparing Trump's pre-emptive concerns to Al Gore's decision to withdraw his concession after the excruciatingly close Florida vote in the 2000 presidential election.

"You know what happened next, we went on for six weeks until we found out who the president was," Conway said on CNN's "New Day."

CNN's Chris Cuomo said her comparison broke down at that point, because many Americans recall exactly what happened 16 years ago.

"That's the problem, though, because we all do know what happened in Florida -- and this is different," Cuomo said, as Conway shook her head. "Donald Trump is saying right now, with weeks to go, 'I think it could be rigged against me, so I'm not going to say I respect it.' That's not what happened in 2000, as we both know very well. There was an auto recount triggered, there was a legitimate issue as to who had won the state in a context where we knew at the time that the popular vote was against then-Gov. George Bush, and it was a state that was run by the GOP at the governor and the secretary of state level. It was George Bush who wound up having to appeal to the Supreme Court to decide the matter, and when they did, that's when Al Gore took the step of conceding the race. This is not an analogy to that."

Conway, who had been sitting quietly through Cuomo's history lesson, said she respectfully disagreed with his account -- but the CNN host reminded her of statements she and other Trump campaign officials made just prior to the debate.

Conway changed the subject to Hillary Clinton, and then asked Cuomo if he would have criticized Gore if he had known three weeks prior to the election exactly what would happen afterward.

"First of all, there were two people on the stage (Wednesday) night, and only one of them was whining, and it wasn't Donald Trump," Conway said. "Secondly, if you had had Al Gore in this seat 16 years ago, and you asked him the same question, Chris, if you said, 'Vice President Gore, if you win the popular vote and you're losing Florida by less than 600 votes that will be decisive to the election, will you concede the election?'"

Cuomo said her analogy was fatally flawed because there's no evidence at this point that the election has been rigged -- or that it might even be close.

"He has no reason to believe right now, Donald Trump, that it's rigged," Cuomo said, and Conway insisted that it could happen. "He keeps saying this."

Conway argued that the system was rigged against Trump, and argued that Cuomo knew that -- which the CNN host said he did not.

"Chris, 96 percent of the donations from journalists went to Hillary Clinton," Conway said. "That's an unbelievable statistic for working journalists, I mean, that's a partisan expression of support through your pocketbook."

"Certainly we're not allowed to give it -- and this is a man who was made by the media," Cuomo said. "So this idea of being nasty to him on purpose doesn't wash with me, and you know that."