WATCH: CNN's 'debate' between Mark Cuban and Rudy Giuliani is as bonkers as you would expect 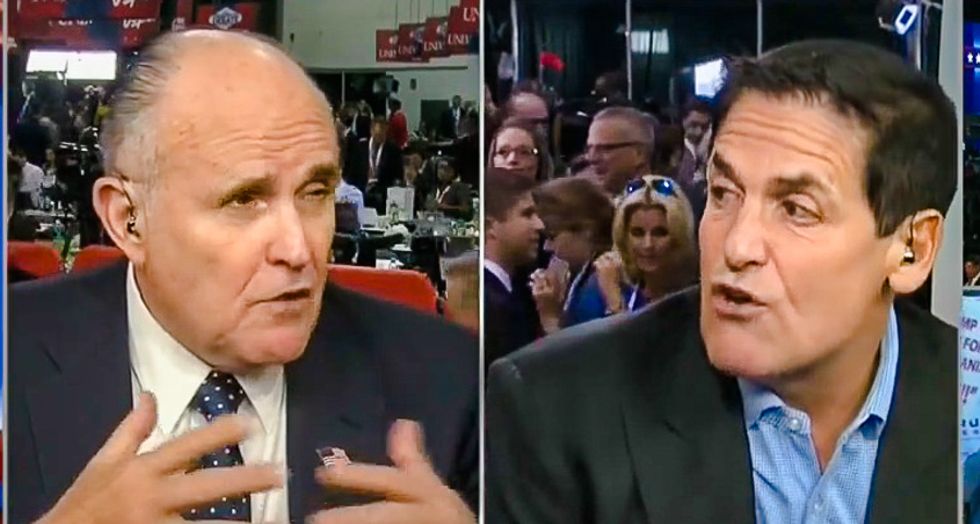 After some disagreements over the importance of Clinton's private email server, the two moved on to Trump's business experience.

"Name any of his products that are still successful," Cuban charged. "He cheated -- cheated -- 6,000 people from Trump University. Hard working men and women, he took tens of thousands of dollars from them."

"Trump games, Trump cards, Trump steaks, Trump clothes," the billionaire continued, listing Trump's failed business ventures. "When somebody has to give their name and sell their name that often, that tells me they're desperate. He has not had a long track record in business. He's done okay in real estate, but everything else, he's been a major failure at."

Giuliani, however, asserted that Trump "has had great success in business."

Watch part 1 of the debate below.

Pro Publica
Beyond developing their camping skills, participating in a food drive to aid the hungry and donating pajamas for seniors, Girl Scouts across America this year were offered a new way to earn a special uniform patch: learning about the wonders of 5G cellphone technology and, in some cases, promoting it.

The opportunity came courtesy of Ericsson, the Swedish telecommunications giant, which sponsored the “Ericsson Limited Edition 5G & IoT” (Internet of Things) patch program. The program, still available on at least one Girl Scout website, targets all age levels, from Daisies (kindergarten-age Scouts) to Ambassadors (those in high school), with an array of activities intended to “introduce Girl Scouts to 5G and the Internet of Things.”

These include watching “Explaining 5G to Kids,” a five-minute video featuring Mats, a bearded Ericsson employee, as he chats with Siofra, Freya and two other squirming but charming children, who speak English with what sound like hints of Swedish accents. Mats explains that 5G is a “new technology for the mobile phone. So everything will be much better.” He explains that the technology could allow the kids’ toys to connect. “Wouldn’t that be cool?” he asks. “This is what Ericsson is doing,” Mats explains. “This is what 5G can do.”