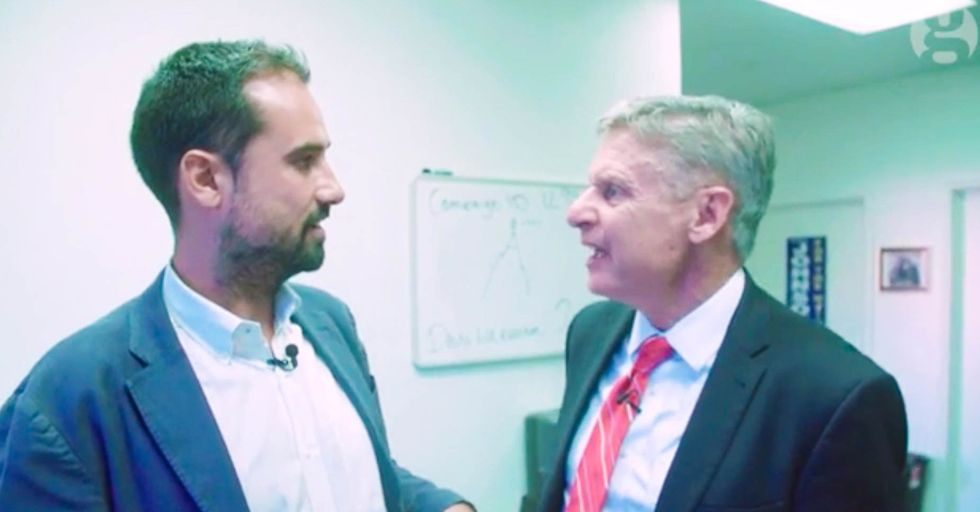 Libertarian Gary Johnson's presidential campaign has been swirling down the drain lately, and the candidate himself appears to be losing his cool.

In an interview with the Guardian's Paul Lewis, Johnson begins yelling at the reporter when asked about his sagging poll numbers and about his tax policy.

When Lewis points out that Johnson's average level of support in the polls has slid from double digits to just 6 percent over the past few weeks, Johnson snaps and asks him why he's even bothering to conduct an interview with him.

"Why are you even interviewing me?" he asks. "I don’t get it. If I’m doing so poorly, is this to preside over a funeral here? It’s not a funeral! It’s a celebration!"

Later in the interview, Lewis asks Johnson to talk about the nuts and bolts of his tax plan, which involves eliminating the federal income tax and replacing it with a nationwide consumption tax. After Lewis explains that no major economist thinks this would be a good idea, Johnson replies that there's no way his tax plan would make it through Congress anyway.

Johnson then got angry and started talking about his support for legalized pot.

"Look, I came out for the legalization of marijuana, let me just use that as an example," Johnson said. "And I will tell you, I had people in my face for years and years and years talking about how stupid and idiotic it was that we should allow marijuana to be legal."

After an awkward pause, Lewis asked Johnson what that had to do with his tax policy.

"It's leadership!" Johnson snapped back.