WATCH: Kurt Eichenwald shames ‘juvenile’ Trump defender for acting like a 'seven-year-old' on a playground 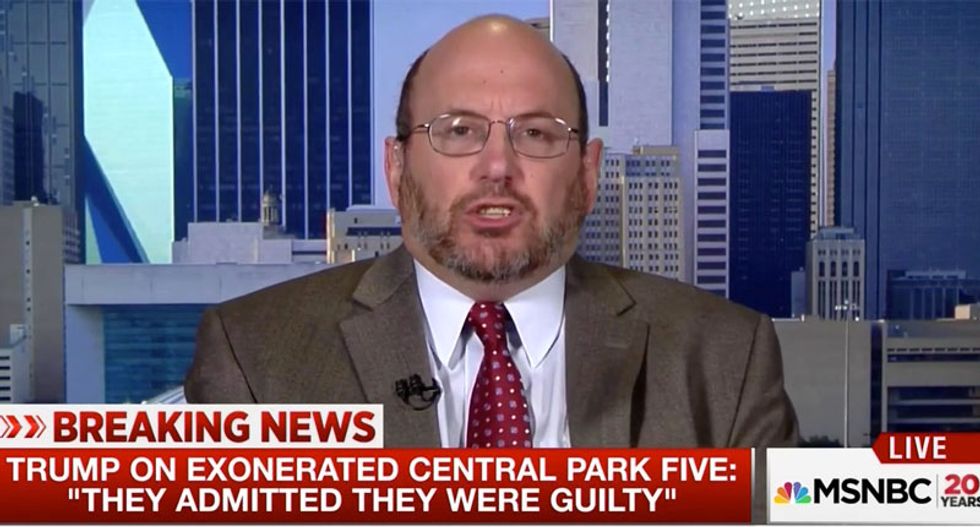 Saturday morning, Newsweek writer Kurt Eichenwald finally reached him limit with Trump advocates who continually respond to any and all Trump scandals or statements with "Yes, but Hillary..." -- blasting them as playground "juveniles."

Appearing on AM Joy, the writer who has been a thorn in the side of the GOP presidential nominee for months -- while delving into his financial shenanigans -- lost his cool with a Trump booster who attempted to dismiss outrage over Trump's refusal to apologize for his 1989 ads attacking the  since-exonerated Central Park 5.

After Republican strategist John Brabender attempted to deflect blame from Trump with occasional mentions of Hillary Clinton, Eichenwald unloaded on him with a blistering rant..

"Two things here," Eichenwald began. "I am so tired of the playground mentality of the Trump defenders. Yes, Trump. Anytime there's an issue, they can't answer for the candidate they're defending. So the first thing they do is like a 7-year-old say, 'Well, my sister did this.' It is so juvenile and number two, he said, 'Well, yes, but, you know, in the 1980s, he believed this.' Okay, fine. We accept that. We accept that's what he believed. We accept he exercised his First Amendment rights."

"Now let's put that aside and talk about the real issue. And the real issue is this man just came out and said, these five men whose lives were destroyed by a false conviction, 'I say they're still guilty.'  You can't change the subject. You can't say Hillary. You can't say 1980's. Defend what he did this week and stop trying to deceive people, stop lying, and address what your candidate is and what he's done."