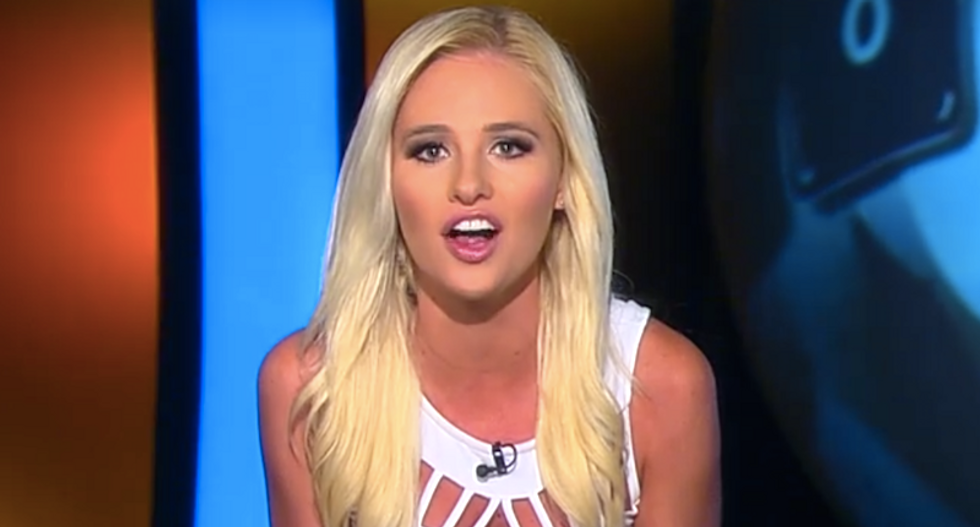 If you were offended by Donald Trump bragging on tape about grabbing women by the genitals, Tomi Lahren thinks it's your fault for listening to him.

The white grievance cheerleader from Glenn Beck's "The Blaze" defended the Republican presidential candidate's aggressively lewd comments, even though she admits "they sound bad."

But she refused to say his words, or the actions they describe, actually are bad.

"This recording does not surprise me at all," said Lahren, a Trump supporter. "Be honest -- most of you aren't shocked, either. It's Donald Trump, a billionaire businessman and reality star, not the pope. Is anyone really that taken aback by what he said?"

Lahren said the 2005 hot mic recordings won't change her mind on Trump, and she's sure it won't change anything for his other supporters -- and she blamed the candidate's critics for hearing his words and being disgusted.

"For all those 'never Trumpers' and bleeding hearts out there saying, 'I told you so,' shut the hell up," Lahren said. "Don't go around acting holier-than-thou about this like you've never heard anyone say anything like that before. Give me a break."

She said women who still supported Trump, "instead of crying in a corner," were no less of a woman than those who recognized the GOP nominee's boasts as the words of a sexual predator.

"The Democrats have been sitting on this for awhile now, and they knew if they released it two days before the debate, a month before the election and after the ballots had been printed, they could ensure the spineless GOP would turn tail and run to save their own asses and political careers," Lahren said.

If anything, the leaked audio recording would only strengthen the support by Trump's base.

"I think you're forgetting why we, the voters, chose Trump as our nominee over all of you," she continued. "We are sick of this holier-than-thou you all parade around in public. We are sick of the fact that most of you were in office from 2002 to 2006, when we had the White House and both houses of Congress -- yet did nothing. You just squawked, that's it."

She expected those Republican majorities to have secured the border, simplified the tax code, cut the federal budget and humiliated their enemies.

"You didn't do jack, but now you sit on a pedestal and pull your endorsement because of a leaked recording and the P-word, wow," Lahren said. "You're the reason Trump is our candidate."

She admits Trump is "far from perfect," and he's not even "presidential," but he sent a message from voters to incumbent lawmakers who seem to put their own interests above the grievances of an angry electorate.

"That's why we chose Trump -- at least he recognizes our frustration," Lahren said, bouncing in her seat with umbrage. "I am still more bothered by what Hillary (Clinton) has done than by what Trump has said."

She said the hot mic recording is a problem because it provokes an emotional response, but she said Trump's boast about sexually assaulting women with impunity had no relationship to governance.

"It doesn't impact border security, national security, trade, jobs, spending or anything else that impacts your daily life," Lahren said. "No! But same cannot be said about Hillary's dream of open trade and open borders. But remember, let he who is without sin cast the first stone."

The Bible quote Lahren chose to end her rant comes from John 8, which describes how Jesus Christ stopped the brutal assault of a woman accused of sexual impropriety with his now-famous aphorism on hypocrisy.