100 years of the ‘gender gap’ in American politics 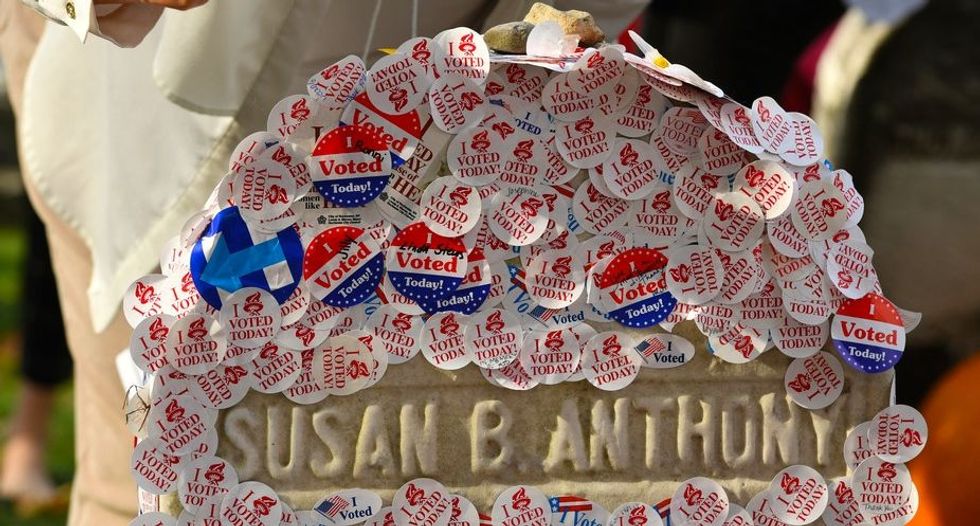 he grave of women’s suffrage leader Susan B. Anthony is covered with ‘I Voted’ stickers. REUTERS/Adam Fenster

In fact, the Donald Trump versus Hillary Clinton contest yielded the largest gender gap – the difference between women’s and men’s voting behavior – in U.S. history. Clinton won women by 12 points and lost men by the same amount – a 24-point gap. The gap is growing. Twenty points separated the sexes in 2012.

Seeing themselves as heirs to the suffrage movement, Clinton supporters even made pilgrimages to Susan B. Anthony’s grave to place their “I Voted” stickers on the suffrage leader’s tombstone.

But despite garnering the most popular votes, Clinton lost in the Electoral College.

The fact that 53 percent of white women cast their ballots for Trump threatens to obscure the importance of gender to U.S. politics.

What’s needed is a broader – and longer – lens.

So let’s start at the beginning. How did the gender gap become so important to American politics? 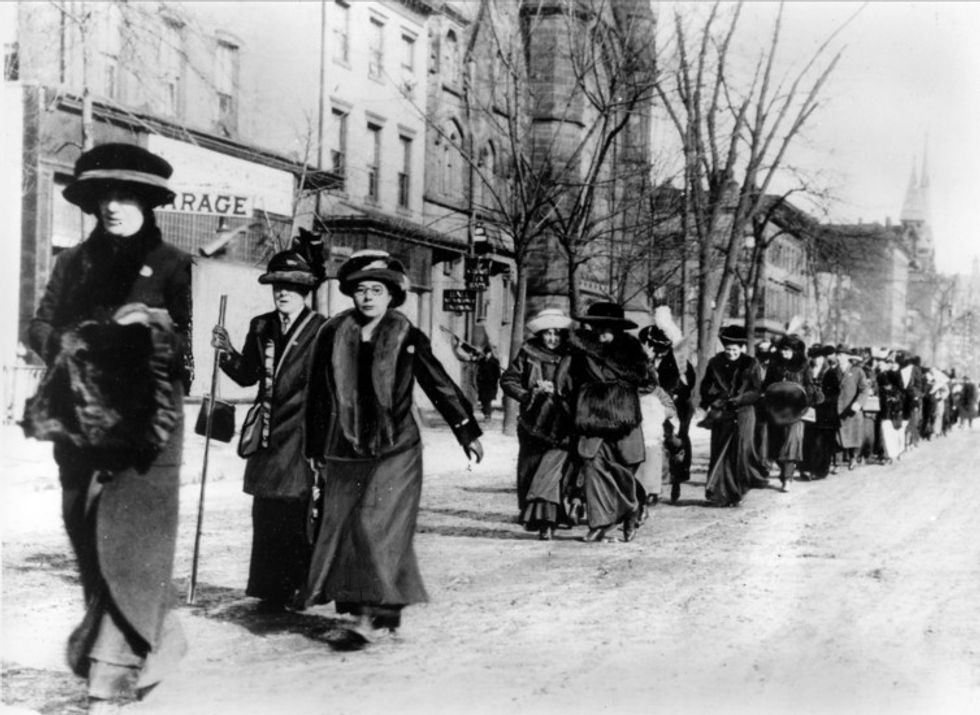 Suffragists march on the eve of Woodrow Wilson’s inaugural in March 1913.

My current research convinced me that the gender gap has its roots in women’s political activity in the Progressive era, which began around 1880 and ran until about 1920.

During these decades of massive immigration, rapid industrialization and tremendous poverty, many Americans hoped to use the political process to address social problems in the nation’s growing cities.

Women didn’t yet have the right to vote, but they joined the Progressive movement by organizing clubs devoted to civic reform. The women’s club movement provided millions of American women with an alternative route into the political process.

One animating issue for club women was revitalizing the campaign for female suffrage. Launched in 1848, the movement for women’s voting rights had achieved only a handful of victories, all in the West, since the Civil War.

Women sought the vote for many reasons, but in turn-of-the-century America, many suffragists argued that women were ideal voters because they weren’t corrupted by party politics. Instead, they argued, women were more interested in sound policies.

As political outsiders, women brought a new perspective to Progressive politics. While not all women shared the same beliefs, many female activists participated in a distinctive “women’s political culture.”

Using their traditional domestic role to justify their unconventional political activity, many suffrage supporters argued that as “social housekeepers,” women would use the vote to “clean up” both “dirty” politics and equally dirty city streets.

In addition, many “social justice feminists” saw themselves as advocates for the nation’s disadvantaged and dispossessed, including women, children, workers, immigrants and African-Americans.

As a result, women made unique contributions to urban reform. For instance, in Chicago, male politicians established “red light” districts. By contrast, women activists defended the rights of accused prostitutes.

The Woman’s City Club of Chicago

The Woman’s City Club of Chicago, while not the first or the only such organization in America, was especially important in terms of the history of women’s political activism.

The club was founded in 1910 to combat the city’s legendary political corruption. According to club member Louise de Koven Bowen, the organization began when a businessman told the club’s first president: “I wish you women would form some kind of a club to fight our civic evils; we men have tried it and failed, perhaps you women can do something.”

By waging a successful campaign giving Illinois women the right to vote in both national and local elections and encouraging women to use their votes to promote reform, the club made women a force to reckon with in electoral politics well before the adoption of the federal woman suffrage amendment in 1920.

‘Good government’ and the gender gap

In 1913, Illinois became the first state east of the Mississippi River to grant voting rights to female citizens.

Women voters went to the polls in high numbers, disproving skeptics’ claims that women would not exercise the right to vote. Moreover, female voters consistently voted for “good government,” creating one of the nation’s first “gender gaps.”

When the votes were counted, however, women were disappointed by the results. None of the female candidates garnered enough votes to gain office, leaving male politicians to continue business as usual. Undaunted by this setback, women activists launched a new campaign to reform Chicago politics. 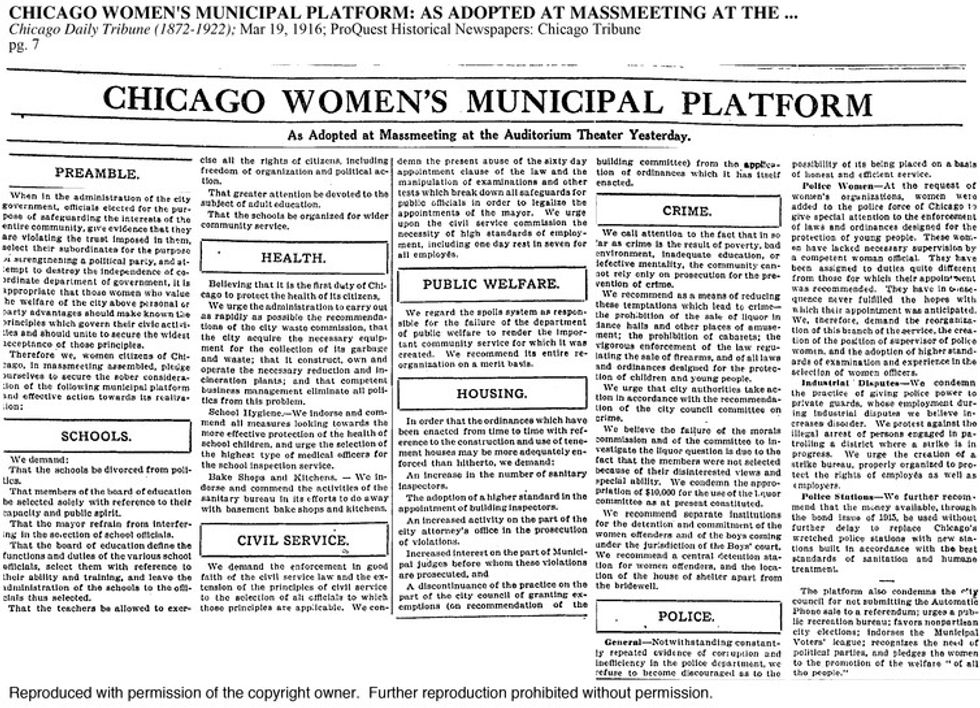 In 1916, the Woman’s City Club sponsored a mass meeting in downtown Chicago to protest the “spoils system” in city government and to promote progressive social policies. Women activists adopted a “Women’s Municipal Platform” dedicated “to the promotion of the welfare of all the citizens and to the securing of equality of opportunity to all the children of all of the people.” Club leaders demanded reforms related to public schools, health and safety, city parks and playgrounds, and the criminal justice system.

Chicago’s female activists displayed a keen awareness of their distinctiveness as politically active women. According to the preamble to the platform, “women citizens” were ideal voters because they prioritized the common good over party politics.

Club women also understood their importance as pioneering female voters. The club president observed: “The attention of suffragists and anti-suffragists throughout the United States is now directed to the women of Illinois in order to determine how fully they are using their newly acquired franchise and with what results.”

In fall of 1916, Chicago women turned out in impressive numbers to vote for political change.

As Progressive Party politician Charles Merriam put it in the

Woman’s City Club Bulletin, “What finer tribute could be paid to the intelligence of woman’s vote!”

A hundred years later, Clinton’s defeat in the presidential election of 2016 indicates that despite important gains in the U.S. Senate, women in some ways remain political outsiders – but outsiders who continue to play a special role in the nation’s politics.

Like Chicago club women a century before, American women activists are responding to defeat by planning a mass protest. As journalist Jill Filipovic remarks, “We fix this with more feminism, not less.”

The gender gap may not have gained Clinton the presidency, but it is just as salient today as it was a century ago.

Anya Jabour, Regents Professor of History, The University of Montana

A Cuban court has sentenced two artists critical of the communist state to nine and five years in prison, officials said Friday, the latest in a string of heavy penalties doled out to government dissenters.

US recession would be 'necessary price' to defeat inflation: IMF chief

But any temporary pain caused by a recession would be "a necessary price to pay" to defeat damaging inflation, she said.