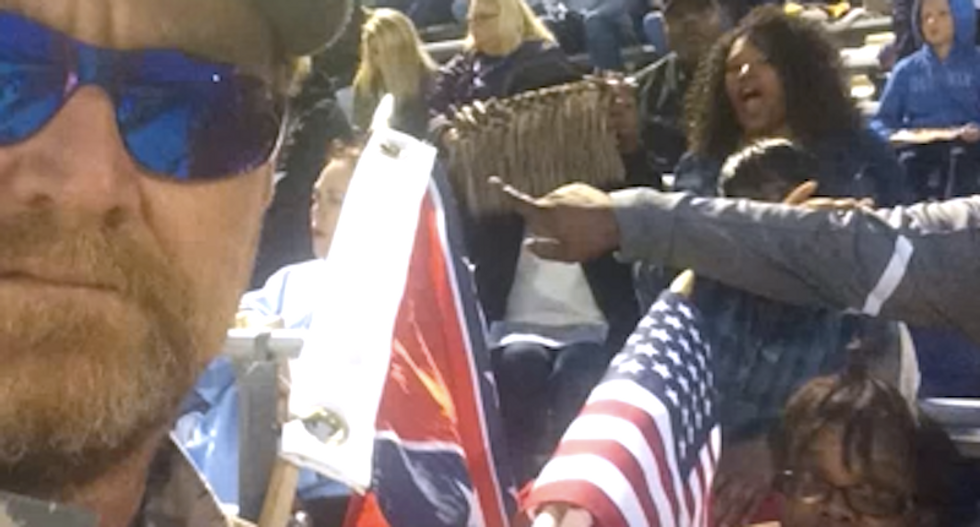 The suspect in the "ambush" killings of two Iowa police officers was kicked out of a high school football game last month after clashing with black fans over his Confederate flag.

Scott Michael Greene was identified by police as the gunman who fatally shot the officers in separate attacks early Wednesday morning in the Des Moines area.

Greene surrendered without incident about 10:30 a.m. to a Department of Natural Resources officer in Dallas County.

A YouTube video uploaded to an account belonging to Scott Greene appears to show him arguing with Des Moines police officers after he claimed he was assaulted by fans Oct. 14 at a football game at Urbandale High School, reported Buzzfeed.

The officers asked the man to leave school property after the altercation, which witnesses said Greene instigated by carrying an American flag and Confederate flag.

“I think I’ve been assaulted by you,” Greene says to the officers. “You grabbed me and shoved me around.”

Greene posted a photo of himself holding the flags as several black fans in the background appear to yell at him, which his caption shows he considered a "civil rights violation."

He offered a tragically ironic explanation for his Confederate flag display in a comment posted on the YouTube video.

“I was offended by the blacks sitting through our anthem," Greene said. "Thousands more whites fought and died for their freedom. However this is not about the Armed forces, they are cop haters.﻿”

He posted three other short video complaints set to music about drafty windows at his apartment building, along with another viral video showing a Latino "gang member" threatening a group of bikers with a gun.

He was also charged with drunken driving in 2010 and with first-degree harassment in 2014.