AM Joy panel: Trump will manipulate foreign policy so that he and his kids can reap billions 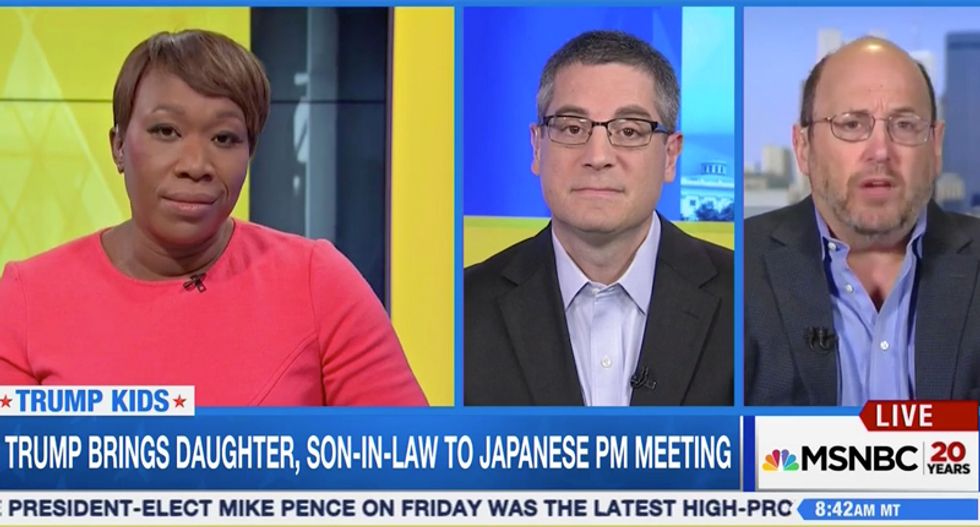 During a panel discussion on MSNBC's AM Joy, writers Paul Waldman and Kurt Eichenwald warned that President-elect Donald Trump and his family will use the power of his presidency to reap billions of dollars from foreign governments vying for favors from his administration and putting the U.S. at risk.

Noting that the Wall Street Journal recently called for Trump to liquidate all of his holdings in order to avoid conflicts of interest, Waldman explained Trump's business model and how he could profit as the most powerful leader on Earth.

'Trump is going to be turning over his business to his children and they are going to be going around the world doing deals in which it's very possible that not only foreign interests but even foreign governments could directly be putting money into Donald Trump's bank account," Waldman explained. "You have to understand that the way that Trump makes most of his money these days is with brand licensing. Buildings these days? He doesn't really do a lot of that. He'll go someplace and say to a developer in some foreign country, 'You're putting up a hotel or a resort and if you put the Trump name on it, I'll let you do that nad you'll pay me a couple of million dollars a year for the privilege of using that name."

"And that is a business that is absolutely just ripe for people who want to exercise influence with the United States government and shape the United States government policy by putting money into Donald Trump's bank account," he continued. "They could say, 'Okay, we'll give you this licensing deal, Ivanka, or Eric, or Donnie, and we'll pay you twice what you thought you were going to get.' And then when it comes time for the United States to make policy related to that government, is that going to affect the decisions that are made? I think it's becoming more and more clear that Trump is going to be using the presidency as an opportunity to make millions and millions and maybe even billions of dollars."

Eichenwald  then pointed at the national security risk.

"The only way to avoid a conflict of interest where the financial interests of the president of the United States and his family are not playing a role in national security is through the liquidation of the Trump organization," he remarked. "It's simply not going to happen. so we are in for four years of what's driving American foreign policy, what goes into Donald Trump's pocket, what benefits his family, are they going to be in on other meetings, do they get to play the role of business people and then on the way out the door say to the prime minister of Japan, 'Oh, we're dealing with one of your friends on a hotel deal.' It is one of the most appalling things I have ever seen in government."