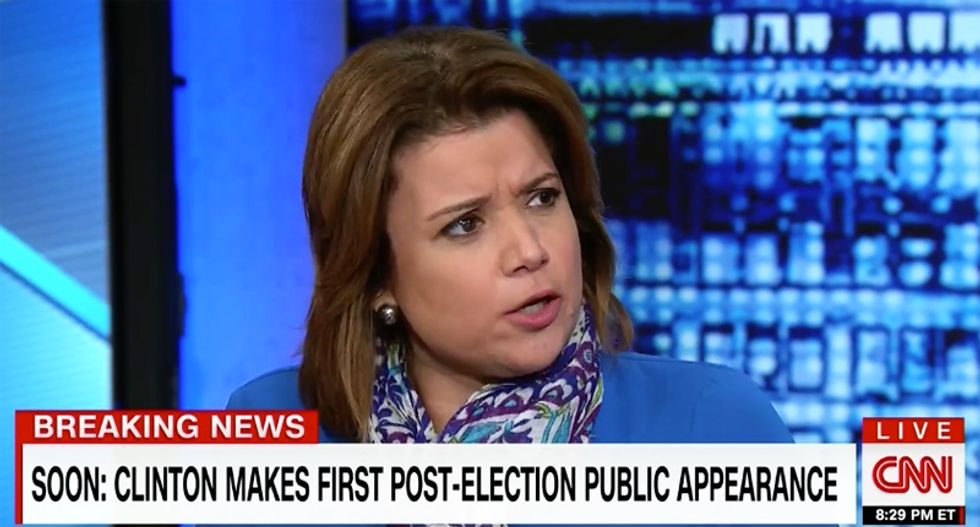 During Wednesday night's Anderson Cooper 360, panelists discussed the protests that have erupted both in the streets and between members of the establishment since Donald Trump's presidential victory last week.

"For those who oppose Donald Trump ... What is the role you see for those people whether Democrats or Republicans, is there a time where they are waiting to give Donald Trump a chance and see what happens?" Cooper asked. "Or does the resistance continue throughout?"

Republican strategist Ana Navarro responded, "Both. Look, I think on the one hand he's now the president of all of us, and if he fails we all fail. And the cost of failure is really scary."

"If he fails on National Security, if he fails on detecting a terrorist attack, American lives could be in danger," she continued. "It is a scary, scary thought so we should all be hoping that he succeeds, that he has a good administration, that he can create jobs, that he can stabilize the economy, that he can do good for the country."

Navarro echoed the thoughts of other politicians who have noted how important it is for Trump to succeed in office. However, she went a step further, commenting on Trump's cabinet picks.

"That being said, if he doesn't, if he continues doing things like appointing perceived white supremacists, if he continues not speaking out against the division and the racial attacks that are going on in the streets of America all over the country," Navarro said, "Then hell yes, we've got to remain vigilant."

"We're not going to remain silent just because he's now president. I want him to be a good president, but if he's not a good president, I have every right like an American, every one of us does, to protest, to be vigilant, to hold him accountable, to make sure that he is the type of president we as an American people deserve."