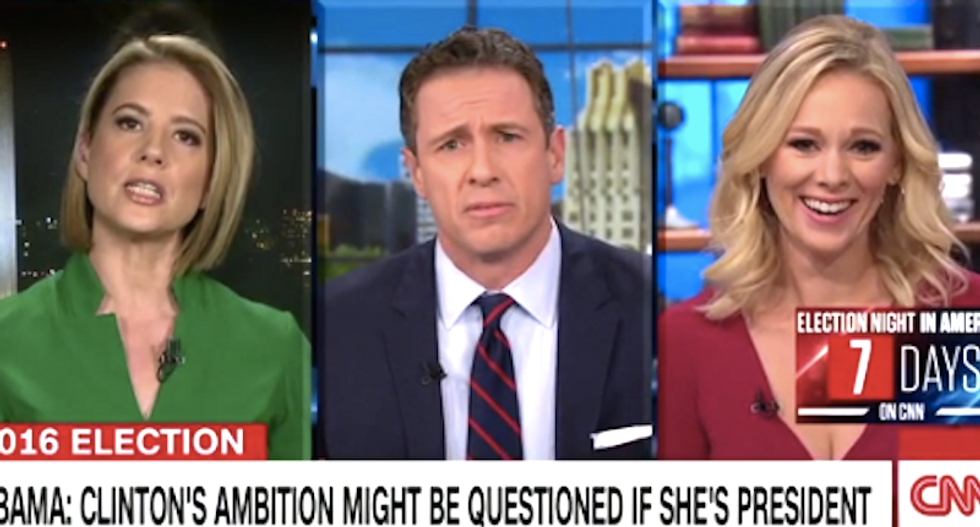 USA Today columnist Kirsten Powers and CNN contributor Margaret Hoover appeared Tuesday morning on "New Day," where they discussed the "double standard" between the experienced Clinton and the unprepared Trump.

"I just want you to imagine a woman doing that," Powers said, after describing how Trump had interrupted his opponent during debates for which he admittedly hadn't prepared. "(Imagine) her being successful and somehow getting the nomination and also maybe, potentially, being president of the United States. To me, it's unthinkable."

Cuomo agreed, but he asked his guests if it was also sexist that he couldn't imagine a woman behaving like Trump had during the presidential campaign -- and Hoover burst into incredulous laughter.

"That's kind of an example," Hoover said, as Cuomo asked if his expectations were as offensive as Trump's boorish treatment of his opponent.

"It's a little paternalistic," Powers said, and asked why he expected more from women than men.

Cuomo said he thought successful women were generally smarter and more capable of thinking through feelings of hostility than men, who he said were too quick to resort to threats and violence.

"I think that's because women have had to learn how to deal with sexism," Powers said. "So I don't think it's fair to expect them to have to constantly be reaching this bar, where Hillary Clinton has to be so good at standing there with this guy who is attacking her and doing things that, if a woman did, we'd call her a psychopath."

.@KirstenPowers on women being held to a higher standard: It's because women have had to learn how to deal w/ sexism https://t.co/w5STEo2Av3