Colbert refuses to apologize in tour de force Trump takedown: That’s 'what a p*ssy would say' 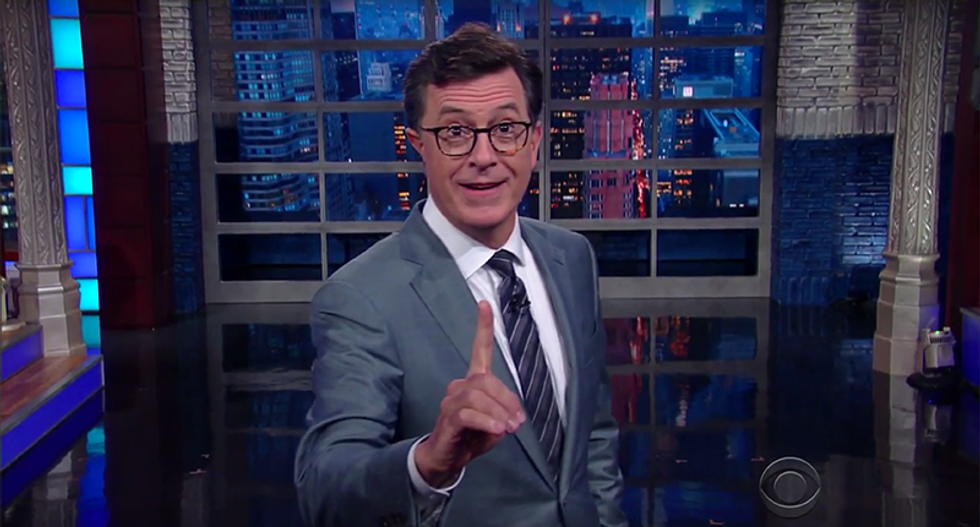 In his opening monologue on Thursday night, Late Show host Stephen Colbert expressed his ongoing doubts and sense of unease about a potential Trump presidency.

Unlike President Barack Obama, Colbert said, he is not feeling "renewed confidence in Trump's prospects.

"Well, the fact that Reince Priebus found it necessary to say that out loud gives me...renewed confidence," Colbert said. "Just like i'd have if I was on a plane and, right before takeoff, the pilot hopped on the intercom and said, 'Ah, this is your captain speaking. I promise you guys I'm going to take flying this plane very seriously.'"

He went on to lampoon some of the cabinet appointments Trump has announced.

"Now, when it comes to filling cabinet positions, Trump has cast a wide net, starting with Donald Trump, Jr. Hey, Don senior? If you're trying to tone down the whole 'dictator' thing, maybe don't give a cabinet position to your son, Kim Jong Trump. It's a little on the nose," Colbert said.

He went on to say that Trump's critics should brace themselves because the notoriously thin-skinned businessman is dedicated to payback.

"Every critic, every detractor will have to bow down to President Trump," Colbert warned. "It's everyone who's ever doubted Donald, who ever disagreed, who ever challenged him. It is the ultimate revenge to become the most powerful man in the universe."

He then pretended to pay homage to Trump, saying, "It was Sam Bee and Seth Myers! They're the ones who said all those horrible things about you. I was just joking. All hail our glorious leader! Giant hands! You've got giant hands! You're going to be great...is what a pussy would say."