David Axelrod warns the Republicans: 'We're going to lean in and fight and win' 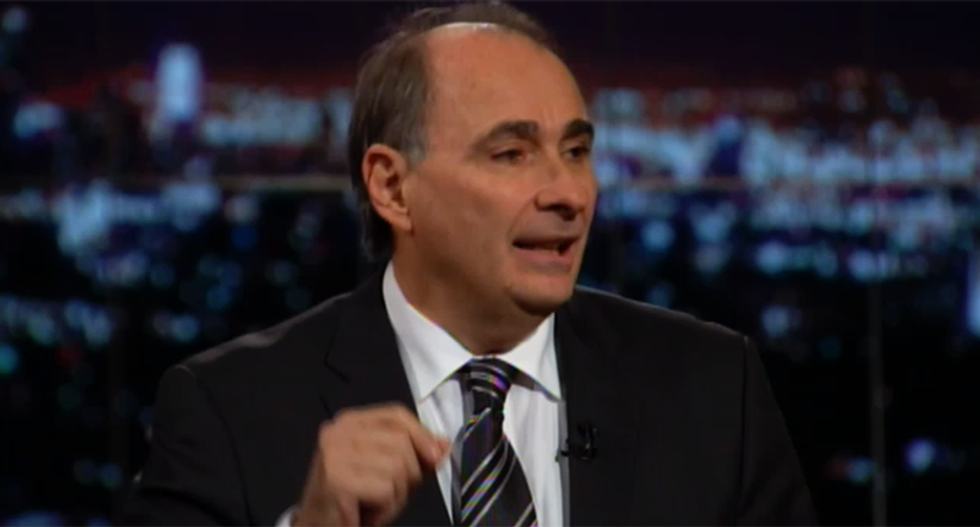 Bill Maher's political panel was loaded with progressives with anticipation that they would be celebrating a victory this Friday. No such luck. But former campaign manager for Barack Obama, David Axelrod, has an empowering message for Democrats and progressives: Lean in and fight.

The show began as panelist Ana Marie Cox remarked that Trump has a bizarre ideology that the Republican Party isn't quite sure how to handle yet. "He's not quite a conservative," she said. "He believes in using government to make big decisions, so sort of socialist-y. He's also very pro-America, so he's kind of nationalist-y. So, he's kind of a nationalist-socialist?"

Axelrod joked that they were attempting to ascribe ideas to someone who has no ideas. "I think what we've seen in the last 48 hours is a capture of Donald Trump by the institutional Republicans in Washington. Today Mike Pence took over as the transition chief. He's put corporate lobbyists in charge of all of his transition committees. Because he doesn't have ideas and he doesn't have philosophical ideas. They see an empty vessel and they're seizing the opportunity."

Maher's concern is that all of the things Trump wants to achieve are already in motion to achieve.

"He could be a success because he could take credit for it," Maher said. "'I'll get rid of ISIS!' We're getting rid of ISIS. 'I'll put America back to work!' We did it! Deporting people, Obama's doing it. He'll just stand there and say, 'I did it!'"

Co-panelist Thomas Friedman remarked that Trump will likely renege on some of his campaign promises, which we're already beginning to see. "He'll say, 'I won't build a wall, wall.'"

Axelrod said that the president must have given Trump some kind of polling information about the successes of Obamacare and the degree to which people really like it. Now, suddenly, he's OK with simply amending Obamacare to make it more effective. When it comes to Trump's infrastructure projects, the GOP is already saying that it isn't a priority for them, so it's not likely to get done either.

Maher acknowledged that Trump won, ran a "vicious, vulgar campaign and I gave it back exactly in measure." That's why he wants to invite Trump to come on the show. He also noted that it does take "some sort of talent" to win the highest office in the land.

Axelrod called Trump's win extraordinary. Particularly considering that on Election Day, "two-thirds of voters said that he was unqualified. Two-thirds said he didn't have the temperament to be president, but he is president. Which is pretty remarkable when you think about it."

"He's so thin-skinned and needy," Cox noted, saying that we might be able to win small victories by the population hating him. "This is the first president we've had that really will govern by the polls." She went on to say that making him unpopular is the only hope Democrats have.

Friedman said that the other major problem with Trump's administration is that he's surrounded by some truly awful people.

When it comes to the issue of climate change, Friedman thinks that if Trump tries to pull out of the Paris Treaty that it will be a serious problem on the national stage. "You mess with this issue, you abandon Paris, you will see a backlash that will make Greenpeace look like a knitting circle."

But Axelrod expects the worst given the climate deniers and oil industry people that are heads of the transition team committees.

Maher noted that because Trump lost the popular vote that there is a majority of Americans who didn't want to see him get elected to office. Thus, there's no mandate for him the way there was for Obama. He had blue hats made up saying, "We're still here," to signify that the majority of Americans that opposed Trump are still citizens of America.

That's when Axelrod got fired up and ready to go.

"If one good thing comes from this," he began. "How many times have we heard people say, 'Elections don't matter. They're all the same. Elections don't matter.' Well, elections matter. And if we take nothing away from this, other than this, it should be that they matter and we're going to lean in and not lean out. We're not going to walk away. We're going to lean in and fight and win future elections and midterm elections when a lot of progressives walk away."