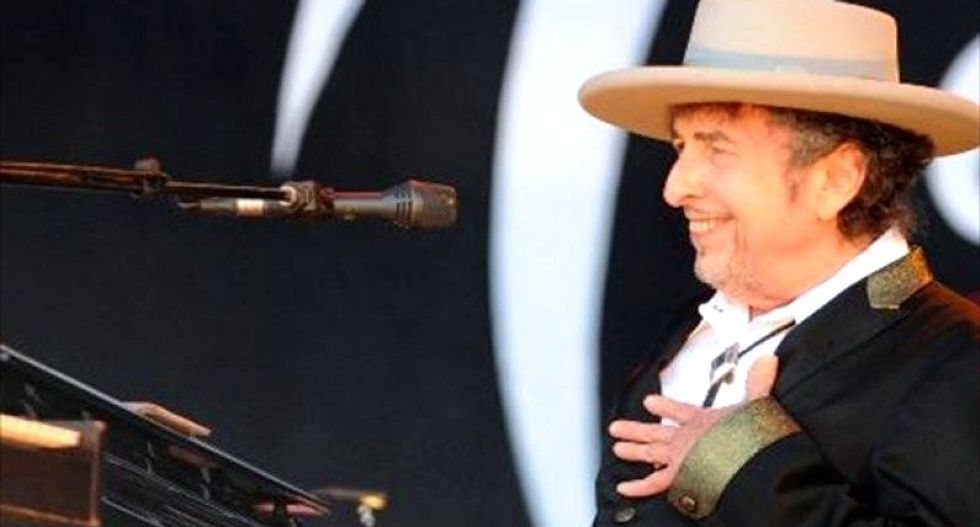 US legend Bob Dylan performs during the 21st edition of the Vieilles Charrues music festival on July 22, 2012 [AFP]

Pulitzer-Prize-winning poet Robert Lowell said that Bob Dylan wasn’t a poet because he “leaned on the crutch of his guitar”. The Nobel committee clearly disagree – they awarded him the Nobel Prize in Literature. Indeed, Dylan has leaned on poetry more than any other musician, before or since. Here are five poets who provided him with inspiration.

Baudelaire’s use of hashish, dissatisfaction with the uptight middle-classes, and celebration of prostitutes, visionaries and outsiders produced a poetry that would have resonated with the Dylan of Mr Tambourine Man.

Baudelaire’s Anywhere Out of this World shares and anticipates Dylan’s pot-fuelled, visionary lyrics of the mid-1960s. Baudelaire writes:

And it seems Dylan wasn’t leaning very heavily on the crutch of his guitar when in Mr Tambourine Man he wrote:

Yes, to dance beneath the diamond sky with one hand waving free

Silhouetted by the sea, circled by the circus sands

With all memory and fate driven deep beneath the waves

Let me forget about today until tomorrow…

Walt Whitman’s inclusive, democratic vision of America would have been of enormous appeal to the young Dylan. The 1856 edition of his Leaves of Grass presents a poet – open-shirted, unshaven, sexually assured – that would not have been out of place on any of Dylan’s 1960s album covers. Whitman’s I Sing the Body Electric – with its unknowing nod towards Dylan’s move from folk troubadour to electric bohemian – opens:

I sing the body electric,

The armies of those I love engirth me and I engirth them,

They will not let me off till I go with them, respond to them,

And discorrupt them, and charge them full with the charge of the soul.

His extended, visionary lines anticipated and inspired Dylan’s long lyrics from Hard Rain through Desolation Row and provided a model that the young singer was keen to follow.

My wife with the hair of a wood fire

With the thoughts of heat lightning

With the waist of an hourglass

Dylan’s images of love and of women are rarely commented upon. If they are, he is often mocked for the surrealism of his lyrics. Love Minus Zero / No Limit contains the verse:

The cloak and dagger dangles

In ceremonies of the horsemen

Even the pawn must hold a grudge

Statues made of matchsticks

Crumble into one another

My love winks, she does not bother

She knows too much to argue or to judge

If Dylan is at fault here, then so is an entire literary and artistic movement. In his greatest moments, Dylan nailed surrealism and love as well as any of its most important poets.

One can only imagine how the teenage, Jewish Dylan must have marvelled at the geeky, bespectacled beat poet Ginsberg, and the impact of his poem Howl. Dylan’s A Hard Rain’s A-Gonna Fall recognises Ginsberg’s “angelheaded hipsters burning for the ancient heavenly connection to the starry dynamo in the machinery of night”,

and recycles them into “I saw ten thousand talkers whose tongues were all broken / I saw guns and sharp swords in the hands of young children.”

One of the key poets of the 1920s Harlem Renaissance, Hughes was responsible for the integration of jazz and black art forms into poetry. In Harlem he uses short, rhyming lines that anticipate the proto-rap of Dylan’s Subterranean Homesick Blues. Here is the complete poem:

What happens to a dream deferred?

Does it dry up

Or crust and sugar over—

Or does it explode?

Bob Dylan – “on the pavement / thinking about the government” – transformed popular culture in the 1960s. To many, his lyrics seemed to come out of nowhere. If all you had been doing was listening to Sinatra, they did.

For the bohemians who had been hanging out in coffee-houses and paying attention to the poets, however, all he was doing was doing what poets have always been doing: making it new, and telling it like it is.