'Gay and Mexican -- everything Donald Trump Hates’: In the streets with the working-class resistance 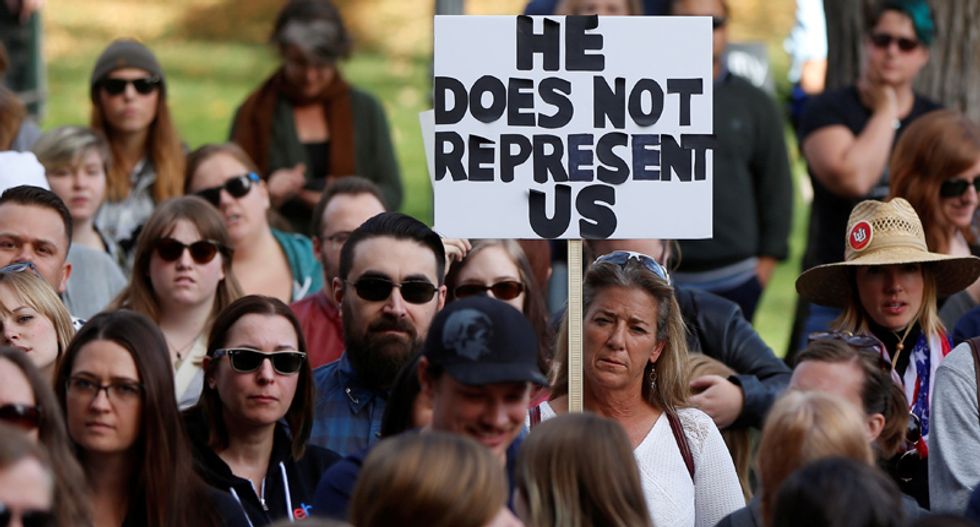 The black Kia sedan crawled around the same corner for the third time. It was tailing hundreds of protesters marching in a circle through the streets of downtown Portland and yelling obscenities against Donald Trump two days after the election.

Uber and Lyft decals were plastered to the windshield, but Tom, who was behind the wheel, wasn’t there to pick up a fare. “I’m protecting the march,” he said. Explaining why he joined the protest, Tom said, “I’m gay and I’m Mexican: Everything Donald Trump hates.” Tom was concerned about his family, all legal immigrants from Mexico. “It starts with the undocumented and who knows where it goes from there.”

Tom was part of an impromptu motorcade of cars and motorcycles at the rear of the protest, pumping out tunes, pouring out clouds of smoke from burning tires and revving motorcycles, and buffering the protest from Portland riot cops. SUVs served as mobile flotillas as youth jumped on hoods and sat on roofs exulting in the carnival-like scene. Drivers and passengers were mostly Hispanics and African-Americans born and raised in the whitest big city in America.

Sandy and Eddy had hopped in their Ford SUV and drove from mostly working-class North Portland. She said, “It was all over the news, all over Facebook.” Eddy, who works at a grocery store, displayed his hometown pride by pointing to a tattoo on his forearm of a map of Portland, Oregon. Sandy, who attends community college, said the escort was spontaneous, but they had run into friends in other cars.

As they inched through the nighttime streets, Sandy said, “We are afraid of what Donald Trump is going to do as president.” They mentioned young relatives who in the wake of the election had been taunted at school for their Mexican heritage with comments like, “Pack your bags and say goodbye to your family.” Sandy said a nephew told her, “I’m afraid I’m going to get home and my mom is not going to be there.”

In another car, Favio, who works as a roofer, hoped Trump might be a one-term president. “What’s he gonna do, bro, if these protests keep going on?” His parents, who are undocumented were “talking about going back to Mexico, to Michoacan.” Sitting next to him, Jenny said, “I thought Trump would win. People are dumb.”

Trump, exposing his contradictory mind at work, slammed the protests in dozens of cities both as the work of “professional protesters” and “incited by the media.” Surrogates like Rudy Giuliani piled on, calling demonstrators “crybabies,” “goons and thugs.”

The name-calling was tame compared to the noxious claims and fake news swirling in the right-wing media bowl. Fox News promoted the discredited rumor that Planned Parenthood was paying protesters. The Washington Times bellowed, “Republicans call on Clinton, Obama to reel in Soros-linked ‘professional’ anti-Trump protesters,” echoing Trump’s anti-Semitic dog whistles of global bankers conspiring to destroy America. The falsehoods often bubble up from phony websites. One, posing as ABC News, pushed out a fake story about a protester being paid $3,500 to protest Trump, Muslim protesters paid $600, “illegals” only $300, and Latinos told to tell Trump supporters, “We’re just going to tunnel underneath” any border wall.

Trump’s forces are trying to sow confusion about the content of the protests and who is protesting. This is different than standard right-wing disinformation. The Trump administration and his Alt-Right minions are waging psychological warfare against the public. Trying to debunk the lies rationally will never work because the strategy is to spin out so many falsehoods that people are overwhelmed and don’t know what to believe. This psyops war will be overseen by his chief strategist and counsel, Stephen Bannon, who as head of Breitbart.com oversaw a toxic dump of racists, fabulists, and conspiracists trying to pass itself off as news.

In Portland, the demonstrations, now in their second week, unite a cross-section of the public far more diverse than Trump’s overwhelming white majority male base. Marches and rallies include all ages, races, and faiths, but what is striking is the racial diversity, the number of women and LGBTQ folk, and the working-class character of many protests.

Protesters include educators, business owners, college graduates and those attending four-year universities, but based on scores of interviews, most toil in occupations like construction, auto repair, warehouses, truck driving, fast food and restaurants, retail, landscaping, livery, and farming or are freelancers. Many youth, in addition to working, are enrolled at community colleges, where working-class students are typically shunted to.

In effect, the outpouring of protest is a working-class revolt against Trump. Equating the working class with white men and those white men with Trumpism is both dangerous and incorrect. Clinton’s support among non-college graduates plummeted by 10 points from Obama’s 2012 performance, and whites without a college degree went for Trump by a more than two-to-one margin. But Clinton also performed worse among Blacks, Latinos, Asians, and millennials than Obama did in 2012. And Clinton gained only one point among women.

So saying Trump’s victory was the result of the “revenge of working-class whites” is a gross generalization. Mike Davis points out how limited this revolt is: “the defection of white working-class Obama voters to Trump was a decisive factor mainly in a lakeshore rim of industrial counties in Michigan, Ohio and Pennsylvania.” This region is experiencing a new wave of job flight and is now “the most visible epicenter of the revolt against globalization.”

If Democrats think it’s a wake-up call that the bulk of working-class whites reject their party, then alarm bells should ring even louder that workers of all colors are alienated from the Democrats. Coming out to protest, Cleo would seem to be the ideal Clinton supporter as a women’s studies major at Portland State University. She voted for Clinton, but said, “I didn’t like her at all. She’s an imperialist.”

Cleo is among the millions forgotten by the media and political parties in the wake of Trump’s victory. Most protesters are turned off by both parties, but they were also banking that a Clinton victory, as everyone predicted, would put the white-nationalist genie Trump uncorked back in the bottle. Now they are working through the shock. Anti-Trump demonstrators say they are protesting for “catharsis,” “to express my grief and rage,” and “make my voice heard.” But they are united by a sense that persecution is likely to intensify against themselves or loved ones and their intention to show they are not afraid.

Luke, a high-schooler who joined a walkout of close to a thousand public-school students on November 14, said, as a gay youth, “I don’t feel welcome in Trump’s America.”

Nubia Ramirez and Taylor Klein walked out with other students from Lincoln High School. Like many women at the marches, the two had stripped down to their bras. Ramirez had PLUR written across her chest. She said it represents how “America deserves peace, love, unity, and respect, and not a misogynistic rapey white man.” She added despite the fact her family was Puerto Rico, “I’m worried about being deported.” Klein said she walked out in support of “people who are afraid. My sister is trans and two friends are LGBTQ.”

Abbey Wilusz, a high-school student with Portland Resistance, the organizing body for many of the protests, said women who took off their clothes “are part of the our body, our choice movement. They are opposing victim-blaming. It’s our choice to have an abortion. Me showing off any part of my body in public is not an invitation for sexual harassment.”

The overarching question for protesters is whose country is this. Even as they often control the streets during the demonstrations, menace lurks near by. At the protests Portland cops in full body armor clinging to police trucks prowl the fringes. At one demonstration, a cop taunted protesters, “Someone is a sore loser.” When a reporter asked what he meant by that, a second officer said to the reporter, who was on the sidewalk, “If you don’t get on the sidewalk, I’m going to arrest you.”

But with hundreds of demonstrators and onlookers holding aloft smartphones, recording every moment, the threat proved empty as the truck sped away and disappeared around the corner.

Arun Gupta contributes to The Washington Post, YES! Magazine, In These Times, The Progressive, Telesur English, and The Nation. He is author of the forthcoming, Bacon as a Weapon of Mass Destruction: A Junk-Food Loving Chef’s Inquiry into Taste, from The New Press. Follow him @arunindy or email at arun_dot_indypendent_at_gmail_dot_com.

The sovereign citizen movement is expanding rapidly, and can now be found in at least 26 countries.

The movement is anti-government in nature, and its followers believe they’re immune from the laws of their government. They also have a proclivity for violence, as demonstrated by a number of high-profile incidents, including an armed standoff in Massachusetts in July 2021.

A common response to the Colorado primary election results this week was to remark that Republican voters rejected the election conspiracists, returned the party to the mainstream, signaled support for the establishment over the fringe.

It’s true that in several high-profile races the most reality-challenged, “team crazy” candidates got beat bad. That’s a relief.