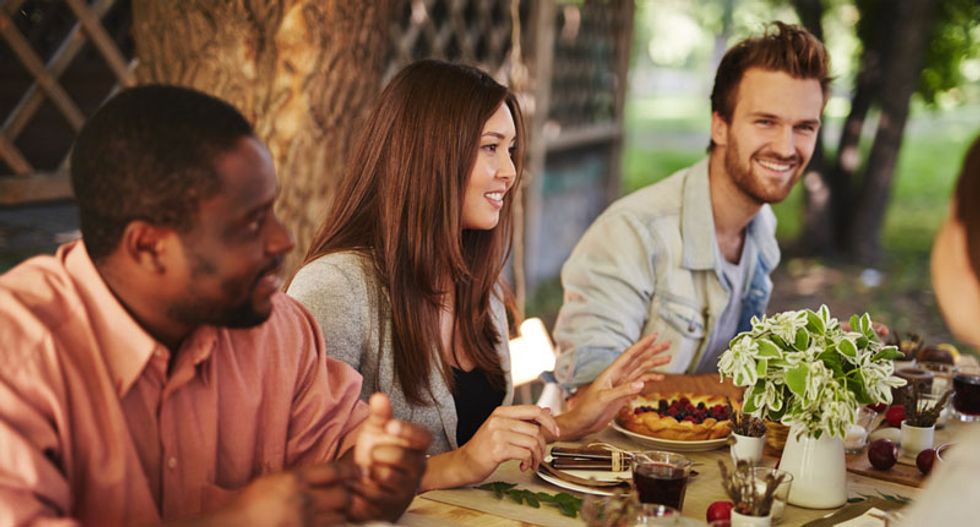 If you're headed home for Thanksgiving or en route to a family dinner, chances are the 2016 election is going to come up. The story was too big and the shock too great for it not to be a topic of conversation. Odds are great that you also might have one or more of those relatives who wants to shove it in your face that Donald Trump is the new president-elect.

If you're nervous sitting down to dinner, here are a few facts that you can keep on your phone to cite for that drunk uncle or your mother's fifth husband.

1. Clinton crushed Trump in the popular vote and a majority of Americans voted against him.

The numbers are still coming in, in fact, there are still 1.5 million ballots yet to be counted in California. Thus far, Clinton is over Trump by 2 million voters. It's the largest margin in history a candidate has lost with. The more important number, however, is that an overwhelming majority of Americans don't support Donald Trump. Clinton so far has 63.6 million votes compared to 61.9 million for Trump. If you add in Jill Stein, Gary Johnson and other third-party candidates, it's over 7 million. That makes well over 9 million Americans who voted against Donald Trump.

2. A whopping 75 percent of the country didn't come out for Trump.

3. Trump must really think he knows more than the Generals because he's ignoring national security briefings.

If you have a family member who disregarded Trump's comment, "I know more about ISIS than the Generals," as nothing more than a quip, it seems to be holding true.

4. Trump supporters were all lied to.

In just the two weeks since Trump's election, he's managed to backtrack on a number of his signature issues.

Those calls to "lock her up" his supporters chanted will go unanswered. Trump isn't prosecuting Clinton. He won't be repealing and replacing Obamacare. Instead, he intends to work to fix it. That big beautiful wall isn't going to be a big beautiful wall after all. It turns out that Trump is fine with having it be a fence. There's already a fence on a majority of the border and we've been building more for years.

Another point is that Trump won't be ending the "war on coal." While the coal miners were promised their jobs would be coming back, Trump lied to them. Coal is just too expensive for an energy source. It's the free market that killed coal, so unless Trump intends to prop up the industry, it's never going to happen. Trump has also said he only intends to deport the "criminal illegals." The rest of the undocumented Americans will probably be safe if his latest statements are any indication. Trump isn't pulling out of the Iran Nuclear Treaty as he promised. Advisors close to Trump say he might "renegotiate" some things, but the U.S. isn't the only country in the deal. If he wanted to renegotiate, he'd have to bring all of the stakeholders to the table again. It took many many years to make it happen, to begin with.

Trump's also pulled back on waterboarding, admitting it might not be a good idea and he might listen to his generals on it instead. He might not be pulling out of the Paris Climate Treaty after all. Trump told the New York Times that he's keeping an open mind about the treaty and he's not sure if he'll keep it or not.

5. Trump caved on his feud with the New York Times.

Remember when The New York Times was the enemy? After spending a majority of the campaign attacking them for being inaccurate and losing subscriptions, Trump sat down with them and settled the feud. It turns out that they're so important that the President-Elect had to do a walk of shame to their office for the interview.

6. Russia pretty much admitted it hacked the Democrats and Donald Trump Jr. had meetings with them in October.

Sergei Markov, a pro-Kremlin political analyst, was a little more coy. He was excited about Trump’s victory and admitted only “maybe we helped a bit with WikiLeaks.”

Last month, the United States government officially accused Russia of hacking of the Democratic National Committee. Prior to the election, many speculated if it was true. However, recently the chief of the NSA confirmed it and called for a Congressional investigation.

7.  Trump has 74 pending lawsuits after settling Trump University for $25 million.

One of the laws that the United States adopted from our English founders was that you can't sue the king for the laws he or she passes. That doesn't matter when it comes to things that happen outside of legislation, however. It also doesn't apply to things the president may or may not have done prior to the presidency.

No president in history has faced quite the brutal onslaught of litigation that Trump does. From accusations of fraud to wrongful termination, sexual harassment on Trump properties and more, Trump may become the only president in history to spend this much time in a courtroom.

Hopefully, your Thanksgiving won't be fraught with arguments, but if they are, at least you'll be prepared. Have a good holiday.