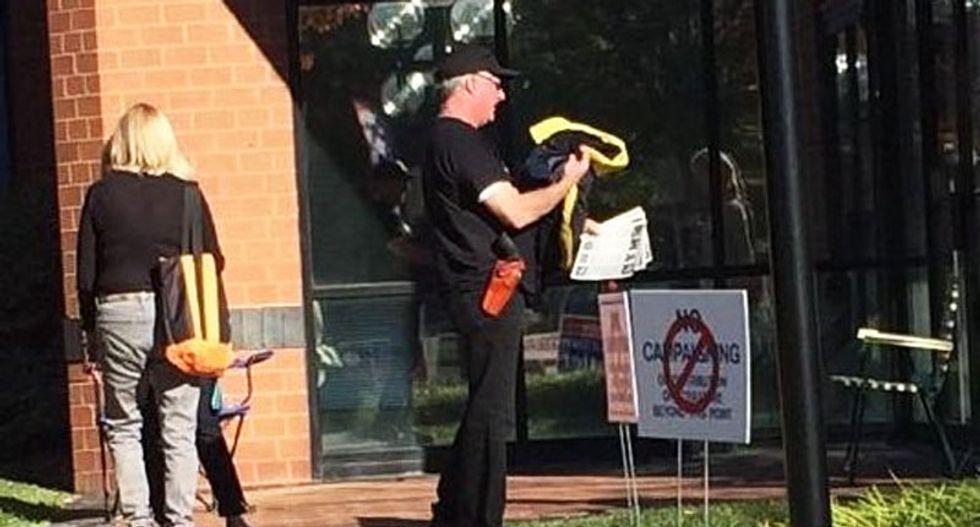 A woman in Virginia claims she was stopped by a man wearing a Trump T-shirt and wearing a handgun on his hip, who blocked her path to a voting site on Friday and asked her if she was voting for Democratic Presidential nominee Hillary Clinton.

A local GOP official defended the man, stating, "It's a free country."

In an interview with the Huffington Post,  Erika Cotti said she was on the way to county’s registrar’s office in Loudon County in order to vote when she was accosted by the man

“I had my 9-year-old son with me. I felt intimidated,” Cotti said. “And I had to explain to my 9-year-old why a man with a 357 magnum is standing outside the polling station.”

According to the woman, he stood in her path and attempted to hand her a Republican sample ballot which she declined.

“He’s like, ‘Who are you going to vote for, crooked Hillary?’ And I was like, that’s really none of your business,” Cotti explained.

Loudoun County registrar  Judy Brown confirmed that the man was outside the office, but was beyond the 40-foot no-canvassing zone so there was nothing she could do about it, with law enforcement saying the man had a right to carry the gun in an open-carry state.

“They said that there’s nothing they could do, that he was well within his rights to be carrying his weapon,” Brown explained.

Informed about that man, a local Republican Party official, stated that the man is a former law enforcement official, and that they asked him to pull his Trump T-shirt over the gun on his hip

“’We don’t want to startle anyone,’” Republican Committee Chairman Will Estrada told the Huffington Post. “He felt really bad, he pulled his T-shirt over it, and I think everything was fine after that.”

As for packing a gun outside a polling place, Estrada added, "It’s a free country. I’m a NRA life member myself. So long as no laws are being broken, I’m not going to tell someone they can’t."