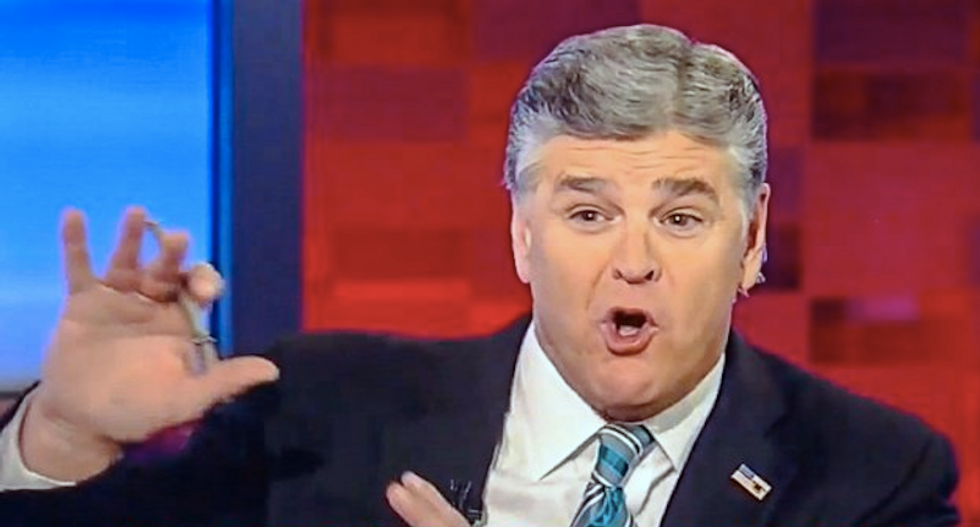 Fox News host Sean Hannity prepared his audience for yet another woman coming forward with accusations of sexual assault against Donald Trump, insisting the newest charge against the Republican presidential candidate “is going nowhere.”

“I told you there was going to be some bomb this week,” Hannity said Wednesday on the Sean Hannity Show. “Didn’t I say? He’s either going to be a drug dealer, or a rapist, or a child molestor or a murderer.”

Referencing former Miss Universe Alicia Machado’s speech yesterday at a rally for Hillary Clinton, Hannity told his audience the reason Clinton “suddenly pivoted back to play the gender card” is because the Democratic candidate is planning to capitalize on Trump’s latest accuser.

“There’s this woman that had claimed that Donald Trump raped her when she was thirteen years old and is going to break her silence on Wednesday afternoon,” Hannity said. “So that’s the one they’ve been holding back on.”

Despite the details, Hannity predicts “this is going nowhere.”

“You know all these years, Juanita Broaddrick, Kathleen Willey, Paula Jones have been out there telling their stories,” Hannity said. “And of course, you know, Hillary was part of the effort to smear and slander and besmirch—it’s pretty pathetic.”

“But you know what, I don’t think any of these things go anywhere," he continued. "They had 12 women come out against Trump, and none of them—nobody knows their names.”

The talk show host concluded his rant by insisting the “media got embarrassed” and continued reporting on “false stories” despite evidence that the accusations were false.

Listen to the audio below, via the Sean Hannity Show.