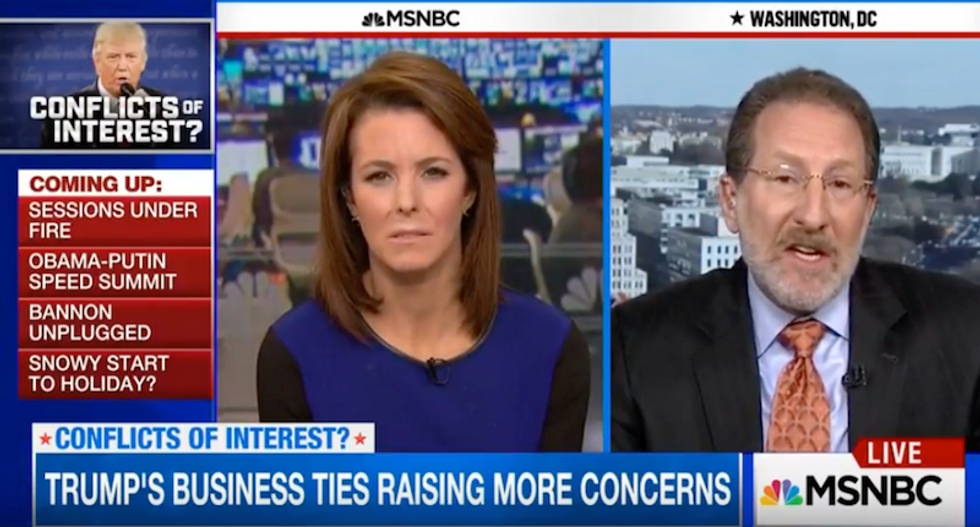 Since Donald Trump became the President-Elect on November 8, many have questioned the possibility of whether he could be impeached once he officially begins his term.

According to LawNewz, the possibility of a Trump impeachment is high, specifically due to the conflict of interest that his DC hotel presents.

After a Washington Post report detailed that foreign diplomats now feel pressure to stay at the President-Elect's hotel in DC. One Asian diplomat said, "Why wouldn’t I stay at his hotel blocks from the White House, so I can tell the new president, ‘I love your new hotel!’ Isn’t it rude to come to his city and say, ‘I am staying at your competitor?’"

On Monday morning, a law professor at George Washington University, Steven Schooner appeared on MSNBC and questioned Trump running the country while maintaining his businesses at the same time.

Because Trump does business in various countries, Schooner said that the new President-Elect could have an "impeachment issue because you have foreign states basically paying money to the Trump Organization by using their hotels."

"The contract [with the General Services Administration] specifically says that no elected official of the United States government can share or benefit from the lease. It’s a 60 year lease with the GSA but the language is unequivocally clear."

In order to open his DC hotel, Trump entered into that contract. Schooner points to this as grounds for impeachment.

"The unequivocal message so far from the Trump Organization is that ethics, conflicts of interest ... in terms of ethical behavior just don't matter," he said.

Trump agreed during his campaign that, if elected, he would leave his businesses to be handled by his kids. In January, he specifically said, "If I become president, I couldn’t care less about my company. It’s peanuts. I have Ivanka, and Eric, and Don sitting there. Run the company kids, have a good time."

However, now months later, Trump also has his kids sitting in on his meetings and working with his transition team.