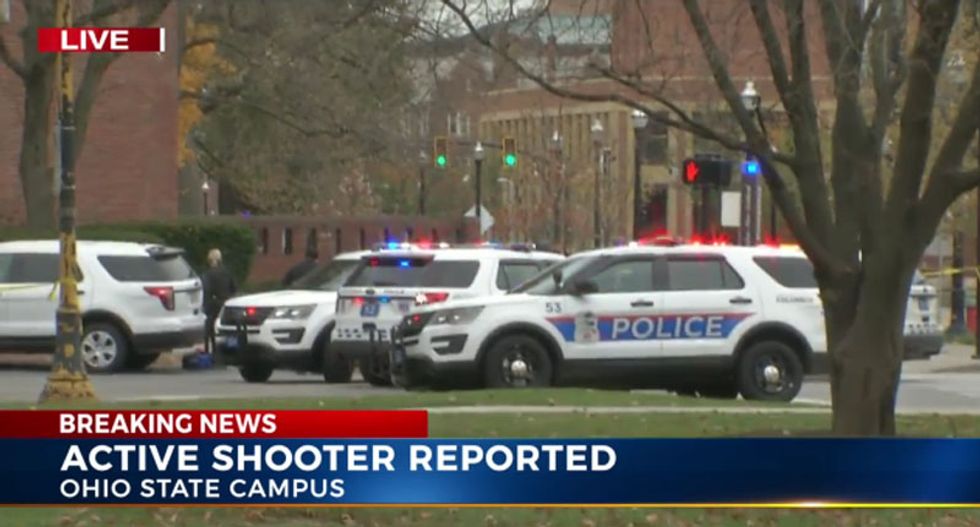 One suspect is dead after a Monday morning shooting at the Ohio State University left nine people wounded.

UPDATE: Suspect used a knife and a vehicle in Ohio State University attack

The university issued an alert of an active shooter around 10 a.m. outside Watts Hall.

Students and faculty were advised to shelter in place and to avoid the north portion of the campus.

Witnesses reported that the suspects may have pulled a fire alarm and then drove an SUV into a crowd of students as they exited the building, and gunshots were also reported.

At least two people got out of the vehicle, and witnesses said one had a gun and the other appeared to have a large knife.

"The guy ended up just coming and hopping the curb with his car and trying to mow down a couple people," Jerry Kovacich, a third-year engineering student, told The Lantern. "He lost control, and I think he ended up hitting three people, and then people were around the car. Somebody asked him if he was OK and the guy just hopped out of the car with a butcher knife and starting chasing people around.”

According to local media, nine victims were transported to area hospitals for treatment of non-life-threatening injuries, including “stab wounds, injury by motor vehicle and other injuries that are being evaluated.”

One educator inside the building was wounded by an assailant with a machete, according to witnesses.

Two men, one white and one black, were taken out of a parking garage in handcuffs.

Another suspect was killed during the incident.

The scene was declared secure about 11:30 a.m., and all classes were canceled for the rest of the day.

Police would not confirm whether the suspects were students, and there was no immediate information to suggest possible links to terrorist groups.