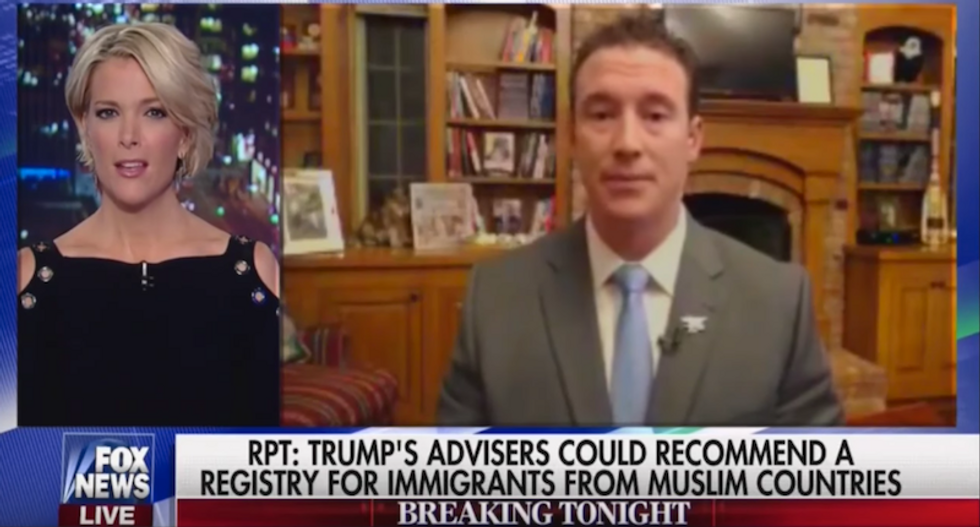 Taking time out from her exhaustive book tour, Fox News host Megyn Kelly sat down with a Donald Trump advocate to discuss rumors that the president-elect is considering some kind kind of Muslim registry.

As for the issue of whether such a move would be constitutional, Higbie pointed to the notion that, apparently people from other countries "are not protected by the same constitutional rights" as Americans.

"So you think it's a good idea and you don't care that this is some sort of a slippery slope where Muslims may get lumped into some group where they get put in a registry," Kelly said, adding, "and some aggressive law enforcement actor in the future might abuse that list."

Just to set the record straight, George W. Bush also had a registry that targeted people from 25 countries around the world as part of his War on Terror. Implemented in 2002, the National Security Entry-Exit Registration System (NSEERS) targeted people from predominately Muslim countries who had to register with the federal government.

Even so, Higbie tried to cover his tracks and suggest that "being a part of the Muslim faith is not a bad thing." However, he also added that some small percentage of Muslims have "chosen to align with an extreme ideology within the faith and they're doing harm."

He even pulled a line from Trump's book and said it was only "until we can figure out what's going on." Higbie also added, "We’ve done it with Iran back a while ago, we did it during World War II with the Japanese."

Kelly called him out immediately. "Come on," she said, "you’re not proposing we go back to the days of internment camps, I hope. You know better than to suggest that. That's the kind of stuff that gets people scared, Carl."

Higbie once again pointed to the fact that "there is precedent" for similar actions, to which Kelly said, “You can’t be citing Japanese internment camps as precedent for anything the president-elect is gonna do!”