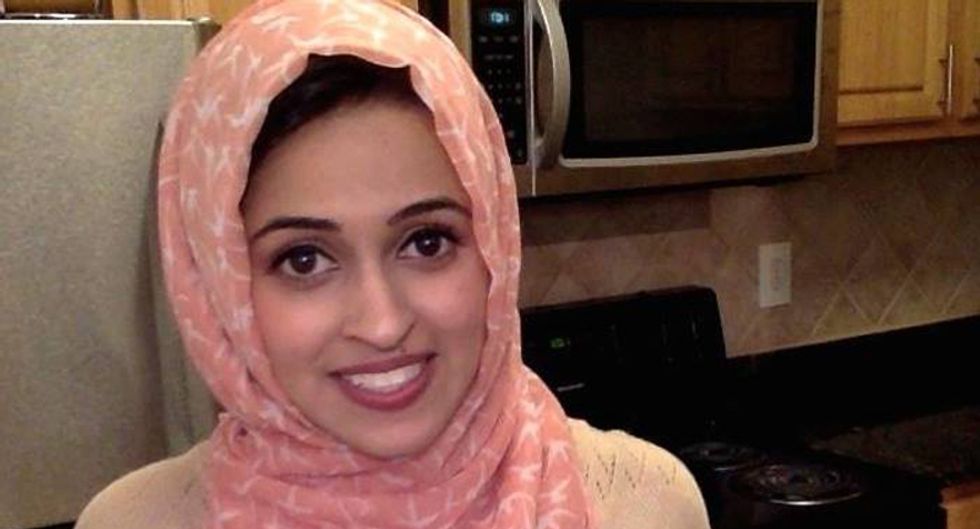 School officials in Georgia are looking for a student who left a note for a Muslim teacher telling her she should hang herself with her "headscarf," following the election of Donald Trump.

According the Atlanta Journal Constitution, Mairah Teli, 24, a language arts teacher at Dacula High in Gwinnett County, discovered the note in her classroom on Friday.

Opening it up it she found it contained two crudely drawn American flags and the message: "Your headscarf isn't allowed anymore. Why don’t you tie it around your neck and hang yourself with it off of your neck instead of your head."

The note was signed, "America!"

According to Teli, she believes one of her students wrote the note and that she addressed the class, saying she would be happy to  speak with them if there were questions about her traditional hijab.

Teli said she had little doubt the note was inspired by Tuesday's election of GOP presidential nominee Donald Trump who made Muslim bashing a cornerstone  of a campaign loaded down with racist rhetoric.

“I feel children feel safe making comments that are racist or sexist because of him," Teli said in an interview.

While school administrators are searching for the culprit, Teli took to Facebook to thanks supports and well wishers.

"I am overwhelmed and deeply touched by all of the outcry and support that I have received in the past 24 hours. I can't even begin to articulate how touched I am to be receiving messages from all over the country with your support. I want to sincerely thank you for your kind words and well wishes. I feel your support affirms that our country is built on morals of compassion and kindness," she wrote.

After stating the school has been fully supportive of her, she wrote to the Dacula Family, "I want to assure you that our school and Gwinnett County Public Schools are doing everything they can to ensure the safety and well being of our students and staff."

A screenshot of the note -- via Facebook -- posted below: