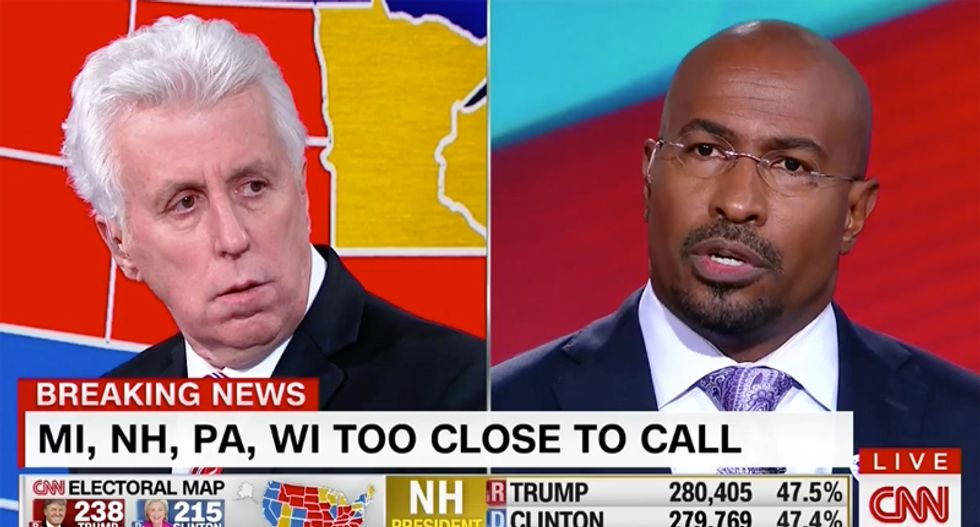 With things looking bleak for former Secretary of State Hillary Clinton, CNN commentator Van Jones delivered a heartfelt explanation to two Trump advocates about why Americans are scared out of their wits of a Trump presidency.

Sitting next to fellow CNN contributors Jeffrey Lord and Kayleigh McEnany, Jones was both blunt and passionate.

"I have enough class and I was raised well enough to say when you outdo expectations, good for you," he began. "But there's another side to this."

"People have talked about a miracle but I'm hearing about a nightmare," he continued while looking directly at the two Trump boosters. "It's hard to be a parent tonight for a lot of us. You tell your kids, 'Don't be a bully.' You tell your kids, 'Don't be a bigot.' You tell your kids 'Do your homework and be prepared.' Then you have this outcome and you have people putting children to bed tonight, and they're afraid of breakfast. They're afraid of how do I explain this to my children. I have Muslim friends who are texting me tonight saying, 'Should I leave the country?' I have families of immigrants that are terrified tonight."

"Yeah," he continued. "When you say you want to take your country back, you've got a lot of people who feel that we're not represented well either. But we don't want to feel that someone has been elected by throwing away some of us to appeal more deeply to others. This is a deeply painful moment tonight."