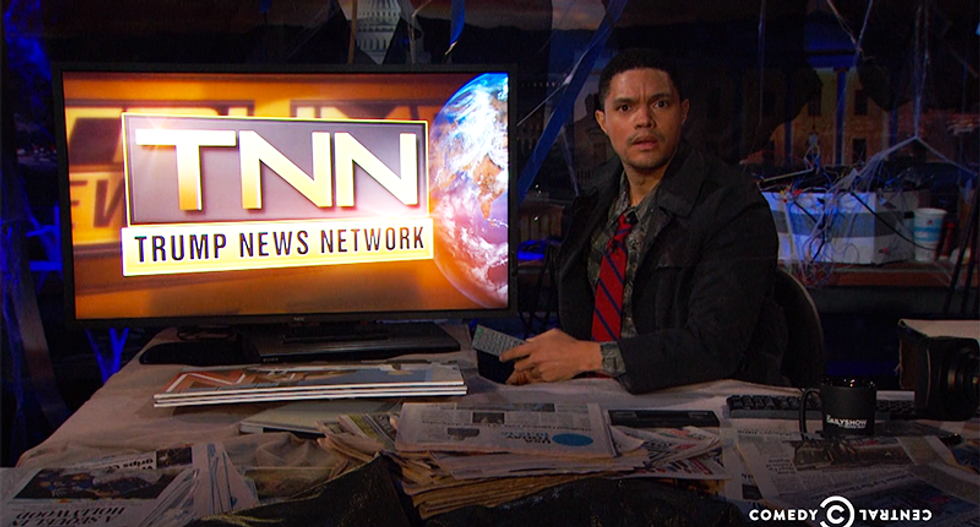 The terrifying world of what America would look like just a few years after Donald Trump takes over the presidency became the Halloween horror story that Trevor Noah filled American minds with on last night's "Daily Show."

"Picture the worst thing you can think of," the words flash on the screen over a darkened field of daisies. "Not that bad, but it's close. Now with only a few days left, President Trump is confident he can secure a second term."

The sheer terror comes straight out of the Divergent series or Hunger Games. "Vote for me, or else," Trump says in the imaginary campaign aid.

Trevor Noah and the folks at the "Daily Show" have been run underground by the new Trump regime. Their broadcast is being pirated from a bunker and the news team is in positions around the globe to safeguard against potential attacks by the anti-media Trump goons. Desi Lydic even had to eat a rat. Luckily Ronny Chieng got out though and has been living the high life in China, where Trump's trade policies made the country rich.

"I've come out of hiding to broadcast one more episode of 'The Daily Show,'" Noah says from the bunker. "I know I'm taking a risk. I'm risking my life and yours by broadcasting this show but with the election just days away it's a risk worth taking, people. You know, it's like getting a chance to f*ck Beyonce when you don't have any condoms. You've got to do it. So what if she has something? She probably doesn't but you've got to do it."

Noah explains to his audience how important it is not to allow Trump to become the president again and confesses he didn't know how it happened the first time. "Things were going great!" Noah explains. "And then the emails. The f*cking emails, man. A week before the election we got sidetracked by those emails and then it turned out there was nothing new! It was 600,000 of Anthony Weiner's dick pics."

It turns out over the course of the four years, President Trump even changed the Washington Monument into the Weiner Monument, because it was that weiner that gave him the election. "Look at that, one dick got another dick elected! It's only gotten worse!" Noah exclaims.

Even the news has been taken over. The only news network allowed is Trump News Network, thanks to the Trumpaganda force and the new libel laws. It's even hosted with a beauty pageant queen as the anchor. "Stay tuned for more completely true news," she tells the audience. From there a shocking revelation that CNN themselves had stolen the missing Malaysian Airlines flight, however, Steve Harvey and Kevin Hart are somehow still beloved.

Like a scene out of "V for Vendetta," John Oliver is arrested while doing a passionate investigation into eggs. "I'm going to miss you, grown-up Harry Potter-face," Noah laments, after Oliver is lead away in handcuffs.

Roy Wood Jr. has been driven into the inner city. But Trump calls any place where black people are the inner city so he explains that he could actually be anywhere. African-Americans have all been outfitted with automatic stop-and-frisk devices that pat them down every 90 seconds. Wood's keeps trying to arrest him for his antacids in his pocket.

The terrifying election for Trump's second term is likely because no one seems to be willing to risk their life to run against him. Hillary Clinton has been sent to "Super Guantanamo," a detention facility they also sent Mike Pence. Ted Cruz lost his mind and is teaching kindergartners in the inner city. Joe Biden sneaks on the Elon Musk rocket that delivered the Obama family to Mars for safety.

"Look, even if the candidate you like isn't in this election, it doesn't mean you shouldn't vote," Noah pleads. "Hell, vote for anyone. You could even vote for The Woman of the Woods, Elizabeth Warren," He says holding up a photo of Warren driven into the forrest for survival. "Sure she might raise taxes but at least she has a plan!"

In the few years Trump has taken over, he's repealed Obamacare and replaced it with an energy drink and dropped a bomb on Iceland because he claimed that's where ISIS came from. Trump has been such a disaster on the international stage that he's been banned from most countries. Even sexually assaulted a penguin on Antartica by grabbing it by the p*ssy.

Even white people aren't having a good time. A smuggled BBC report reveals that even after a four-year construction on "The Wall" the wall only stands four feet tall. Even white guy Jordan Klepper didn't think that Trump's America would be that bad, but the total economic collapse really did cause problems after all. "Oh yeah, thinks definitely need to change" Klepper explains. "That's why I've voting for Trump. He really tells it how it is. He's not a politician. He'll make America great again."