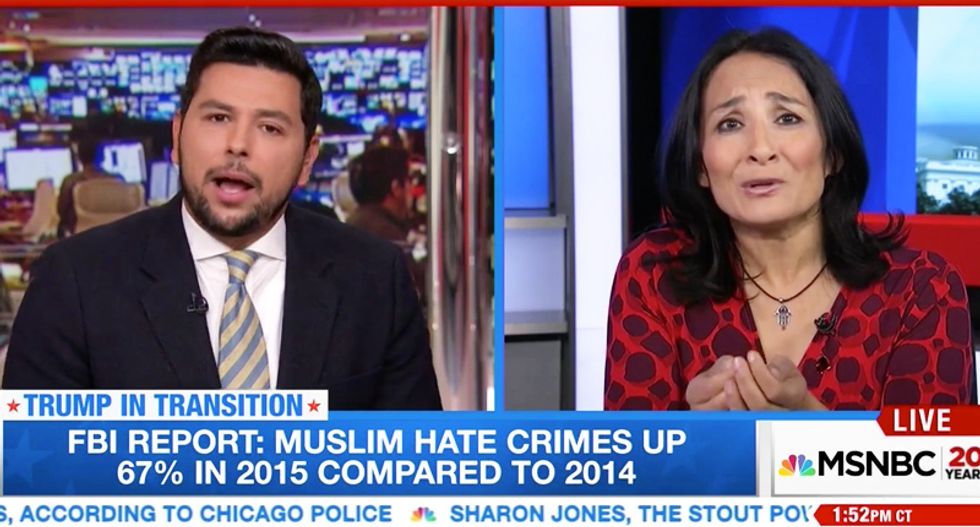 In a confounding interview with MSNBC’s Ayman Mohyeldin, a Muslim writer who voted for Trump — but who identifies herself as a “liberal” — refused to attribute recent attacks on Muslims to Trump’s victory on Nov. 8. Instead, she blamed Muslim organizations, Hillary Clinton and the past eight years under President Barack Obama.

According to Asra Nomani, Muslim-Americans should disregard the campaign rhetoric of Trump and his selection of virulently anti-Muslim military officer Michael Flynn as his National Security Advisor,saying it is merely liberal "fear mongering."

"I believe we have a lot of Chicken Littles running around exaggerating many of the policies being talked about," Nomani said. "This Muslim registry that has been characterized as something that President Bush put in place, that was removed because of the policies of the Obama administration. This idea that we're seeing on TV of a return to internment camps is far from any reality that would ever be possible in this country. What I believe will happen is the rhetoric, as you talk about, will not be realized in demonic ways.  What concerns me the most is that, as a liberal, what I see happening is that the left has in fact been engaging in a lot of fearmongering that has not allowed us to come to the middle in our conversation about the next administration."

Told my Mohyeldin that the FBI is reporting a 67 percent increase in hate crimes against Muslims in the past year, which they attribute to the overheated campaign, Nomani swatted the comment away by blaming it on the victim's religion.

"Wait. I'm sorry," Mohyeldin replied. "I just wanted to understand that. You're saying the attack on Muslims in America are a result of extremism in Islam and not because of hate crimes that the FBI says are being statistically documented?"

"A Muslim woman walking down the street who gets her hijab pulled off her hair, you're saying that's the fault of Muslim organizations," he pressed. "You're not wanting to answer the question whether or not there's a rise of hate crimes against Muslims in this country which the FBI is documenting."

"You're so biased in your questions of me," Nomani replied.

"You're just not answering the questions," Mohyeldin shot back.

"You're not allowing me to answer it as I wish to answer them," Nomani replied. "And so unfortunately what is happening right now in our conversation is exactly why Hillary Clinton lost the White House. It's this inability of those on the left and liberals to have any kind of tolerance for people with other opinions that don't fit the answers that they want to hear."

Following the interview, Mohyeldin spoke with attorney Zahra Billoo from the Council of American-Islamic Relations and asked her what she thought of Nomani's comments.

"I couldn't make any sense of it," she replied.