Resistance after the 2016 presidential election: Fear, protest -- and what comes next 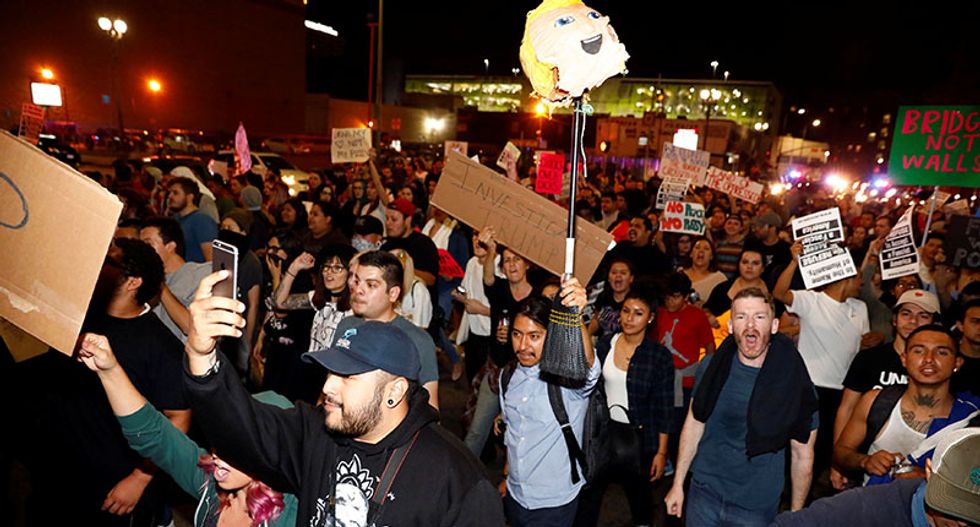 A demonstrator holds a pinata head of Donald Trump on a stick as they march in protest through the streets of downtown Los Angeles in protest following the election of Republican Donald Trump as President of the United States in Los Angeles, California November 10, 2016. REUTERS/Patrick T. Fallon TEMPLATE OUT

Since the results of the presidential election were made public, we have witnessed the emergence of a resistance movement protesting the election of Donald Trump.

Protests have taken place in at least 52 American cities. A few turned violent. There has also been a multitude of racial and hatred incidents in schools, universities and public places.

Why are we witnessing so much division and violence?

My research and teaching focus on social movements – understanding their sources, evolution and decline. I believe we can understand the origins of the protests by examining how the expectations of the public were shaped at different stages of the election.

During the general election campaign, each candidate worked to delegitimize their opponent.

The Clinton campaign portrayed Donald Trump as a fraud for his shady business activities and as a racist for his views of Mexican immigrants and the endorsement he received by the Ku Klux Klan. They said he was a woman hater and a sexual aggressor for his upsetting remarks about groping women. And they called him a puppet of Putin for allegedly working with Russia to leak incriminating Clinton emails.

For its part, the Trump campaign was not short of accusations against Hillary Clinton. They portrayed her as lacking judgment for the Benghazi incident. They called her a liar and a criminal for allegedly breaking the law regarding the use of a private email server. They said she was corrupt for using her position as secretary of state to advance the Clinton Foundation and the interests of Wall Street bankers.

In both cases, the campaigns shaped the perception of the public that the other candidate was morally, ethically and legally unfit to be president. The consequence was a highly polarized and antagonistic political environment stirred by both left and right media echo chambers.

This negative campaign elevated the level of anxiety and stress in the population as the vitriolic arguments, stories and videos on social media increased concerns about both candidates.

Even before the campaign ended, violence was visible at Trump rallies and with the firebombing of a Republican office in North Carolina.

During the general election, nearly all political pundits predicted the victory of Clinton and the failure of Trump. Poll analyst Nate Silver gave Clinton a 71 percent chance of winning. Sam Wang from Princeton University put Clinton’s chances at 99 percent.

Even the analysts working for the Trump campaign admitted that his path to victory was narrow.

This positive bias toward the Clinton campaign shaped the perception of the public and the partisan base of each party, setting false expectations for the Election Day results. 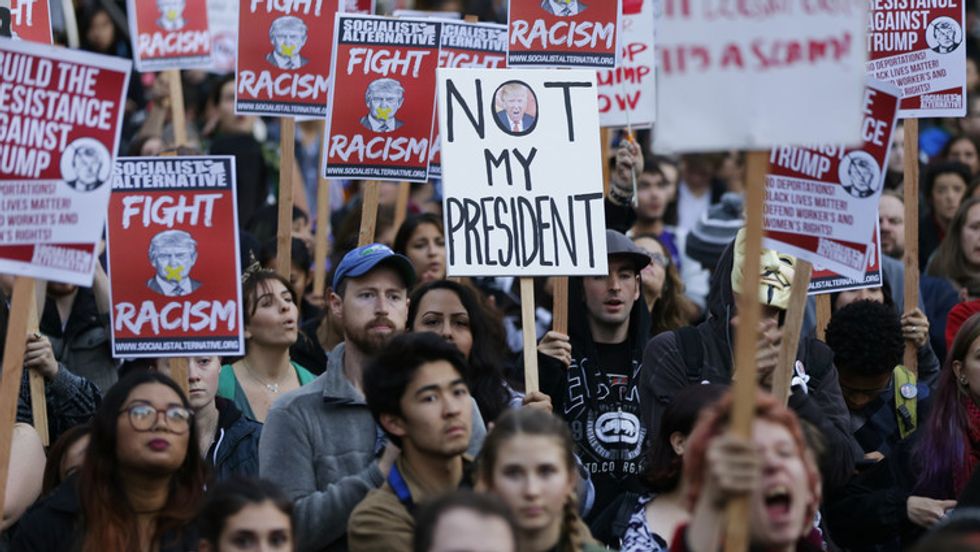 Protesters hold signs during a protest against the election of President-elect Donald Trump in downtown Seattle.

Stage 3: Perception of a stolen election

Trump’s victory came as a shock, immediately shaping perceptions of the losers and winners.

For Clinton supporters, concerns related to President-elect Trump’s unfit character turned to fear and a call to denounce the results, reject the new president and foster solidarity with those who felt disfranchised. The “safety pin movement” began. Protesters gathered.

The frustration of the democratic base was heightened by the fact that Clinton won the popular vote. Violence erupted in some protests, like the ones in Portland, Oregon, but most were relatively calm.

Trump supporters were surprised by the election results, too. For some, the victory was perceived as a validation of racist values. This led to several apparent hate crimes across the country such as swastikas drawn in schools, slogans painted calling to “Make America White Again” or students shouting “white power” or chanting “build the wall.”

The next few weeks and months will be critical in shaping the perception of the public regarding the Trump administration’s competency to lead the country through cabinet selection, domestic policy priorities and engagement with foreign nations.

For instance, the recent nomination of Steve Bannon as senior White House advisor has confirmed the perception of danger among African-American, Hispanic and Muslim communities. This negative view has led to institutional resistance from some in the U.S. Congress and even by state and local agencies. For example, the Los Angeles Police Department made a strong statement refusing to participate in immigrant deportation.

What happens next is in the hands of the president-elect and those who surround him.