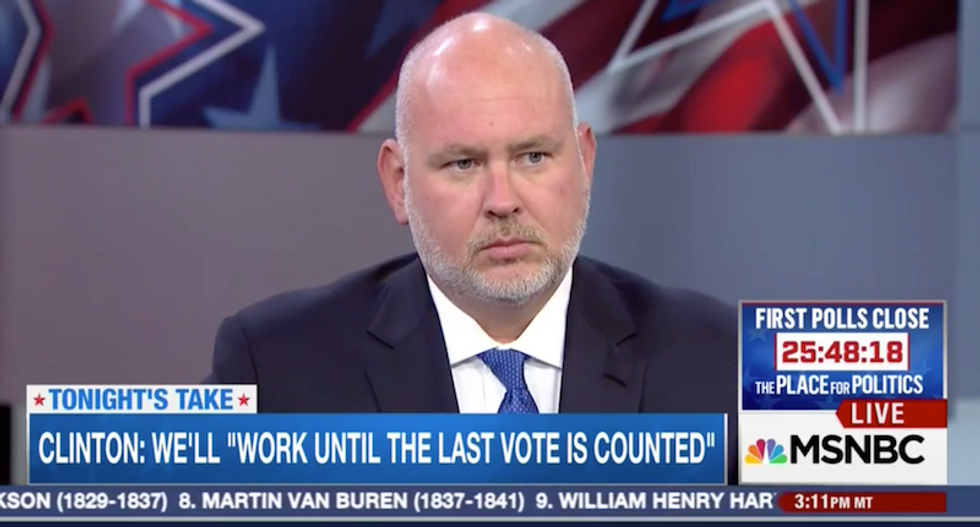 Former McCain campaign Chief strategist Steve Schmidt joined a MSNBC panel on Monday and discussed the importance of Michigan to the 2016 election. MSNBC host Chuck Todd asked panelists, "What took Trump so long to get to Michigan?"

Panelists discussed the difficulties for each party of reaching working class American voters.

Schmidt responded to Todd's prompt on Michigan and said, "They don't have a functioning campaign, so they weren't on top of it. They didn't see where the opportunities were."

Todd asks why it's taken so long for the Republican party to crack the code of "Northern tier states" in presidential years, reminding Schmidt how McCain's campaign had trouble in states like Michigan and Minnesota as well.

"I think this is the second of four really consequential global elections, the next will be the French and the German," Schmidt explained. He noted how there is a shift in the global political climate from one where people are split down the middle as right-leaning and left-leaning, to one based on who has benefited or not from globalization.

There are those who have benefited from globalization, and those who feel they have been left behind, according to Schmidt.

"I think that's going to be the new fault line in American politics," Schmidt said. "And the voters, the Bernie Sanders voter and the Trump voter — like fishnetting, the fish can swing through the netting from left to right very, very easily."

Later in the segment, Schmidt touched on Silicon Valley, otherwise known as a hub of tech start-ups and entrepreneurship. "Let's look at the Silicon Valley wing of the Democratic party and be clear about the partisan nature of all of these companies," Schmidt started.

"The number one job for not college educated white men in America is driving something somewhere. So when we talk about an era now of driverless trucks, driverless cars, where do those jobs go? Where's that displacement?" Schmidt continued.

He added, "We have these arguments about minimum wage — $12, $15. We're 18 months away in this country from a robot in the window at the McDonalds handing you your cheeseburger."

We're not having conversations about the "profound displacements that are going to come to what's left of the high paying blue-collar jobs in this country," Schmidt said.