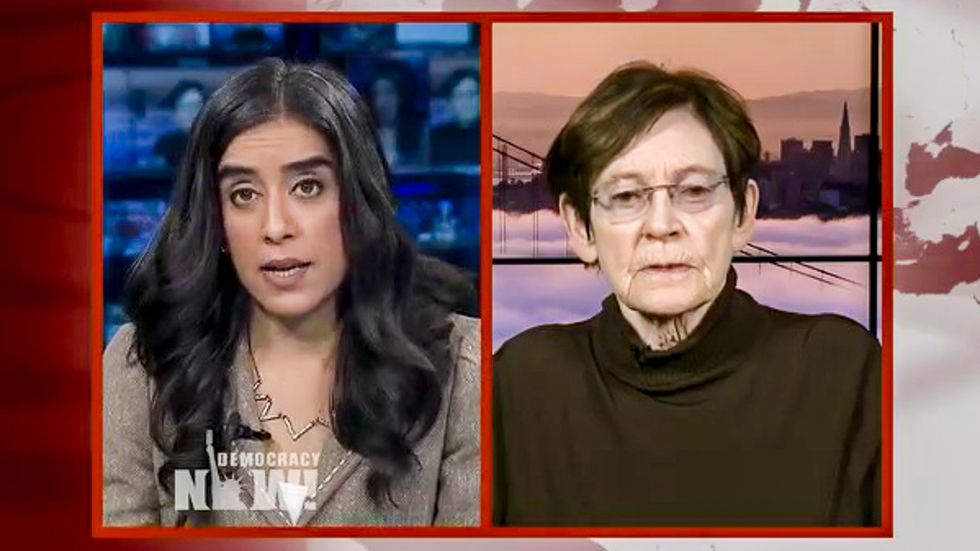 Renowned indigenous historian Roxanne Dunbar-Ortiz explained this week that the Thanksgiving holiday was "never about honoring Native Americans" as many children are taught in U.S. schools.

In an interview with Democracy Now's Nermeen Shaikh on Wednesday, Dunbar-Ortiz addressed misconceptions about the holiday.

"Actually, it’s never been about honoring Native Americans," she remarked. "It’s been about the origin story of the United States, the beginning of genocide, dispossession and constant warfare from that time—actually, from 1607 in Jamestown—until the present. It’s a colonial system that was set up."

Dunbar-Ortiz, who is the author of An Indigenous Peoples’ History of the United States and co-author of All the Real Indians Died Off: And 20 Other Myths About Native Americans, asserted that the idea that Thanksgiving was created to honor Native Americans "is a completely made-up story to say the Native people welcomed these people who were going to devastate their civilizations."

According to the historian, President Abraham Lincoln envisioned the holiday as "a day for families to be together and mourn their dead and be grateful for the living."

"And I think that’s an appropriate holiday, that—how people should enjoy it," she said. "But they should take Native Americans and Puritans out of the picture for it to be a legitimate holiday of feast and sharing with family and friends."

Dunbar-Ortiz observed that "nationalism" made it difficult for people to let go of the myth.

"Americanism is white supremacy and represents negative things," she concluded. "There’s almost no way to reconcile it. It simply has to be deconstructed and faced up to; and, otherwise, there will be no social change that’s meaningful for anyone."

Native peoples are expected gather in Plymouth, Massachusetts on Thursday to commemorate the 47th National Day of Mourning.

"Many Native Americans do not celebrate the arrival of the Pilgrims and other Europeean settlers," organizers of the event noted in a statement posted to Facebook. "Thanksgiving day is a reminder of the genocide of millions of Native people, the theft of Native lands, and the relentless assault on Native culture."