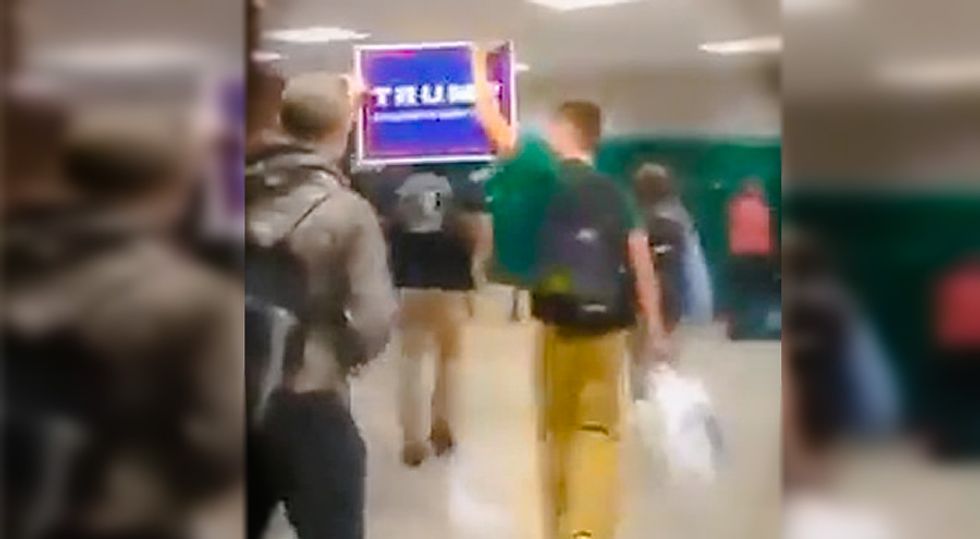 The news that Donald Trump won the 2016 presidential race reportedly incited racial slurs and assaults at one vocational school in Pennsylvania.

In a Facebook post on Wednesday, York NAACP President Sandra Thompson revealed that she had been receiving reports of students at York Vo-Tech "being spit on, attacked, and called names because of their race or perceived Immigrant status."

One concerned parent provided video of students at the school holding a Donald Trump campaign sign while shouting "white power."

The group "Parents of York County School of Technology Students" said on Facebook that members had received reports that "Trump's presidential win was announced at school today amidst chants of 'white power.' That white students referred to other races as their slaves, and at some points even spit on those students."

"I think we should all have a chat tonight with our students, whether they were participating, appalled bystanders, or victims," the group recommended. "This whole situation is absolutely horrible."

Social media accounts collected by WHP indicated that the racial tensions had caused fights at the school. One student said that she had her breasts grabbed by another student who claimed "it was his right."

The school confirmed to WHP that the incidents were being investigated.

During a traffic stop, late last month, Dayton police officers pulled Clifford Owensby from his car by the hair. Owensby, who is paraplegic, repeatedly told the officers he could not get out of the car, that he wanted them to call a supervisor, that they could hurt him by pulling him from the vehicle. They pulled him out anyway, handcuffed him, and dragged him away.

“It actually feels unreal, it feels like waking up to a bad dream over and over again," Owensby said of the incident in an interview Monday.

Bill Maher: Trump and his allies are building a structure to count the votes the way they want the votes counted

Special to the Capital-Star

Pennsylvania Capital-Star: In our last interview (Oct. 19, 2019) you said “Pennsylvania may be the most important state in 2020." The Keystone State put President Biden over the top with his eventually carrying our 20 Electoral College votes.

Former President Donald Trump heard from angry New Yorkers on Tuesday after he returned to the city to take part in a deposition.

According to CNN, Trump testified for over four hours in a lawsuit brought by protesters who alleged that they were assaulted by his security guard in 2015.