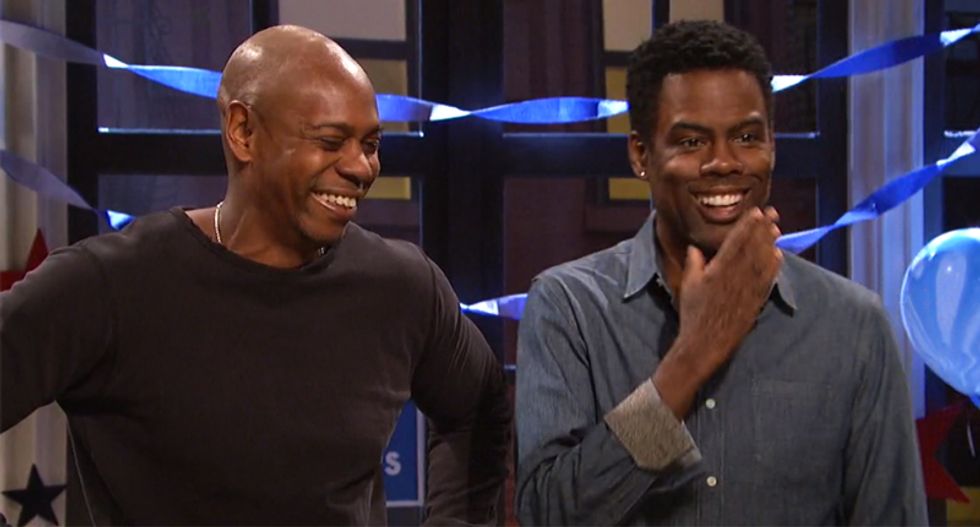 In a surprise appearance on Saturday Night Live, former cast member Chris Rock joined guest host Dave Chappelle in a sketch poking fun at white voters stunned by the idea that Donald Trump is about to become the new president.

Stretched out over election night, voters at a watch party who are excited about the possibility of a Clinton presidency become increasingly despondent as Trump pulls farther and farther ahead, only to be met with sardonic comments from Chappelle.

Rock makes his appearance late in the evening when things take a turn for the worse, and he and Chappelle trade quips as the party guests begin to fret about freedoms they have always enjoyed being threatened -- oblivious to that fact that what they are describing is what black Americans live with every day.

As it dawns on the collected party goers that Trump will be the new president, cast member Cecily Strong remarks, "Oh my God, I think America is racist."

"Oh my God," a sarcastic Chappelle tells Rock. "You know I remember my great great grandfather told me about something like that. But he was a slave or something."

As one party goes announces, "This is the most shameful thing America has ever done," the response by Chappelle and Rock is priceless.