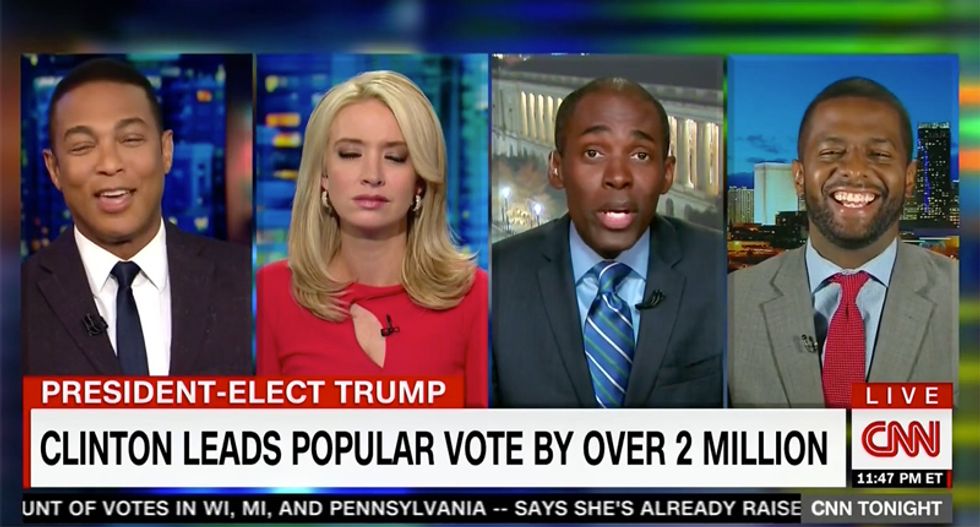 CNN host Don Lemon put one of Donald Trumps's staunchest advocates through the wringer Monday evening for doggedly insisting the president-elect won "by a landslide" despite recent electoral history illustrating it was one of the poorer showings by the eventual winner.

Following a discussion where Trump advocates Kayleigh McEnany and Paris Dennard complained that plans for recounts in some Midwestern states were an attempt to "delegitimatize" Trump, Lemon put Dennard on the spot for Trump's claims on Twitter that he won by "a landslide."

"I think you can if you look at how much he -- how better he did than Secretary Clinton--" Dennard offered before being cut off by Lemon.

"You're changing the definition of landslide?" Lemon shot back. "You can say he did better because he won, but can you call something a landslide when it's not actually a landslide? Is that what you're doing?"

"If you look at how well he did against Secretary Clinton in the Electoral College, it was a landslide," Dennard attempted again before Lemon shut him down once more.

"It's you not liking my explanation," Dennard weakly parried, before Lemon once again cut him off.

"You look at the definition of a landslide, this is not one. Let me read this again," Lemon said before rattling off again how presidential winners did in recent elections.

"I'm asking you the definition of a landslide. Yes, he won, he won by a big margin, but it wasn't a landslide. Why is he saying that?" the exasperated Lemon asked.

"Because it was a landslide," Dennard weakly insisted, at which point Bakari Sellers broke into laughter and a smirking Lemon gave up and went to a commercial.