'What an incredible burden that was to bear’: Obama salutes Ellen’s 'coming out' at emotional awards presentation 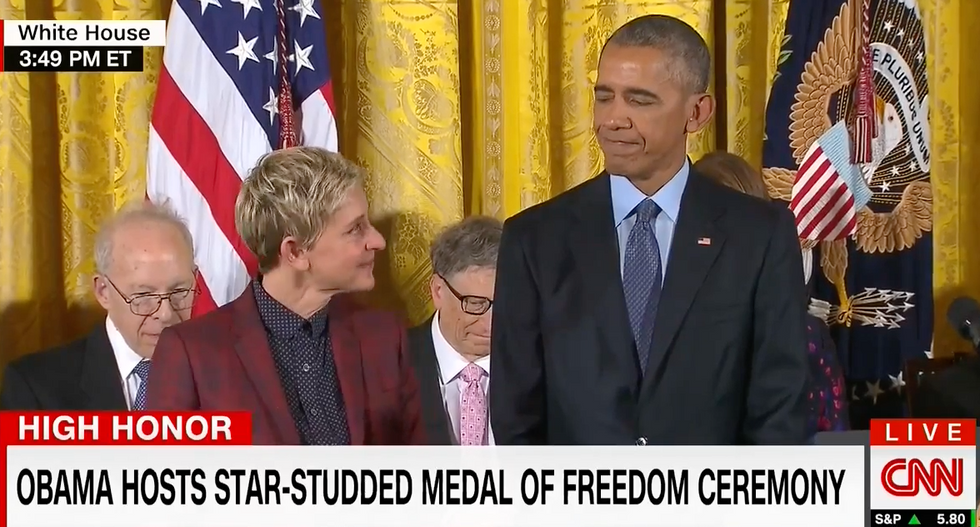 During the Presidential Medal of Freedom ceremony Tuesday, President Barack Obama gave an emotional tribute to comedian Ellen DeGeneres, emphasizing her role as an icon for the LGBT community, as well as the inspirational and inclusive themes that permeate her public life.

Noting the beloved comedian “has a way of making you laugh about something rather than at someone," Obama praised DeGeneres for her courageous and groundbreaking decision to come out to the public as a gay American almost 20 years ago:

“It’s easy to forget now when we’ve come so far where now marriage is equal under the law … Just how important it was, not just to the LGBT community, but for all of us to see somebody so full of kindness and light, someone we liked so much, somebody who could be our neighbor or colleague or sister, challenge our own assumptions, remind us that we have more in common than we realize, push our country in the direction of justice.”

“What an incredible burden that was to bear, to risk your career like that,” Obama continued, later noting the comedian’s work suffered for “a pretty long stretch of time” after she came out. “People don’t do that very often," he said.

“It’s like Ellen says, ‘we all want a tortilla chip that can support the weight of guacamole,’” Obama joked. “Which really makes no sense to me, but I thought I would break the mood because I was getting kind of choked up.”

“Today, everyday, in every way, Ellen counters what too often divides us with the countless things that bind us together and inspires us to be better, one joke one dance at a time,” the president concluded.

DeGeneres teared up as Obama draped the medal around her neck. The officer reading the names once again praised the comedian’s generous spirit:

“In every role, she reminds us to be kind to one another and to treat people as each of us wants to be treated. At a pivotal moment, her courage and candor helped change the heart and minds of millions of Americans, accelerating our nation’s constant drive towards equality and acceptance for all. Again and again, Ellen DeGeneres has shown us that a single individual can make the world a more fun, more open more loving place so long as we just keep swimming.”

Watch the videos above, via CNN.
Report typos and corrections to: corrections@rawstory.com.