What could the rest of the world do if Trump pulls US out of Paris Agreement on climate change?

Climate change negotiators from around the world – now meeting at the COP22 conference in Marrakech, Morocco – continue steadfastly with the task of putting meaning and action into the landmark 2015 Paris Agreement to bring down global greenhouse gas emissions.

Yet, the tone in Marrakech has suddenly become more subdued. While many conversations remain staunchly defiant, others have assumed a funeral-like quality, as national delegates and civil society representatives try to assess the ramifications of the U.S. presidential election.

Elections have consequences for global climate change negotiations and the future of the planet.

The concept of global warming was created by and for the Chinese in order to make U.S. manufacturing non-competitive.
— Donald J. Trump (@Donald J. Trump) 1352229352.0

President-elect Donald Trump has repeatedly stated he does not believe in human-induced climate change. He has argued that climate change is an expensive hoax that was created by the Chinese to make U.S. manufacturing noncompetitive. He has also declared his intent to roll back federal climate change and renewable energy policy. Most poignantly for Marrakech, he has loudly declared an intention to “cancel the Paris climate agreement.”

Snowing in Texas and Louisiana, record setting freezing temperatures throughout the country and beyond. Global warming is an expensive hoax!
— Donald J. Trump (@Donald J. Trump) 1390976858.0

Some cling to the hope that President Trump will forget pronouncements made by Candidate Trump just as Candidate Trump had ignored the pontifications of Citizen Trump. An important indicator of why this may not be the case is the appointment of Myron Ebell as head of the transition team for the U.S. Environmental Protection Agency (EPA). Ebell, also a front-runner to be appointed as head of the EPA, is an outspoken climate change denier who flat out rejects the Paris Agreement as unconstitutional.

Myron Ebell of the Competitive Enterprise Institute (CEI) and likely head of the EPA in the Trump administration talks to Climate Home during COP21 in Paris.

Notwithstanding the mechanics of officially “leaving” the Paris Agreement – which stipulate a four-year process – how should the rest of the world respond if the Trump administration were to formally or informally disengage from the Paris Agreement?

We think there are at least four ways in which things can unfold.

Scenario 1: Walk out with the US

If the Trump administration decides to withdraw from the Paris Agreement then other major economies which are parties to the United Nations Framework Convention on Climate Change (UNFCCC) will have justification to do the same. This is de facto what happened with the 1997 Kyoto Protocol once it became clear that the U.S. would not ratify and was not serious about its implementation.

Not least because the Paris Agreement came together as a result of much diplomatic leadership by the Obama administration, other countries would feel a legitimate sense of anger and disappointment towards the United States if it were to walk away from the agreement.

Whether the walkout is a formal withdrawal from the agreement or an informal abdication from its responsibilities, the Paris Agreement would be effectively doomed as signatories fail to meet pledges to reduce country emissions made in Paris. The implication of such a scenario is that the UNFCCC negotiation process could just wither away and critical agreed-upon temperature goals would slip further out of reach.

Scenario 2: Kick the US out

Such a rationale and the anger that would be triggered by a U.S. walk-out of the Paris Agreement, particularly amongst the European Union (EU) and China, could induce the parties that remain serious about the agreement to adopt a retaliatory posture. While it would be unprecedented, countries could decide that a U.S. withdrawal from the Paris Agreement should have real consequences for U.S. involvement and participation in the U.N. climate change process.

If they were to do so, they would be taking a cue straight out of Donald Trump’s book “The Art of the Deal” and its key dictums of “fighting back very hard” and “using every leverage.” As Donald Trump puts it in his book: “The worst thing you can possibly do [is to] seem desperate… That makes the other guy smell blood, and then you’re dead.”

There has already been at least one suggestion that a U.S. withdrawal from the Paris Agreement should be met with not just forcing the U.S. out of all global climate arrangements but imposing “economic sanctions in the face of this [Trump’s] treaty-shredding lawlessness.”

We need an international campaign to impose economic sanctions on the U.S. if it breaks its Paris climate commitments. For real. $ talks.
— Naomi Klein (@Naomi Klein) 1478733581.0

Scenario 3: Wait it out

Reasoning along such lines could compel the other countries to simply wait out any tantrums of the Trump administration. Essentially, this would mean ignoring U.S. theatrics in the hope that time will bring either sanity or a different president to the White House who would steer the U.S. back into support of the Paris provisions.

Other major powers, especially China, may also view this as an opportunity to assume international political and environmental leadership without fully igniting the wrath of a Trump White House by actively pushing the U.S. aside. Then the result could be a de facto sidelining of the United States as an essential player in global climate change politics, at least for a while.

Scenario 4: Engage the US

Unseemly as Donald Trump may seem to many countries on many levels, it is not easy – maybe not even possible – to ignore or sideline the world’s largest economy and still the only real superpower on the planet. On all sorts of international issues the world will have to learn to engage President Trump. This could also be the case for climate change. 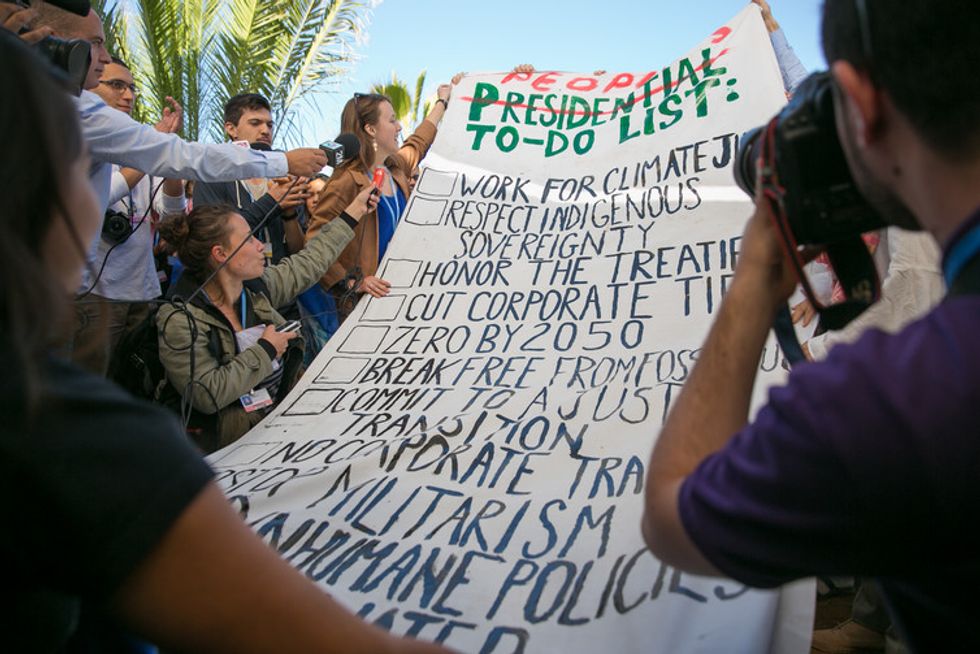 Attendees at COP22 lament the victory of U.S. President-elect Donald Trump and call on civil society to take greater action on climate change.

During the George W. Bush administration, other major actors kept negotiating with the United States even after its unequivocal rejection of the Kyoto Protocol. Back then other countries believed that the importance of the United States as both a leading political and economic power and greenhouse gas emitter was so great it was better to keep it inside the UNFCCC process.

Such engagement with the Trump administration can take place both through multilateral channels and in bilateral talks, mainly with China and the European Union. The question would be whether President Trump would be willing to remain engaged, and on what terms.

What should Marrakech do?

At one level the delegates at Marrakech can simply ignore the election results for now, especially when current U.S. Secretary of State John Kerry visits them Wednesday. After all, Barack Obama is still U.S. president. And no one – truly, no one – knows what a President Donald Trump might actually do, or not do, come January 20, 2017.

Perhaps it is wise for COP22 to remain mum for now. It would not be wise, however, for the world to not start preparing for different scenarios. The next COP does not meet until November 2017, somewhere in Asia. By then it may well be too late to think about options, probably from a negotiation perspective and certainly from the perspective of the planet’s health.