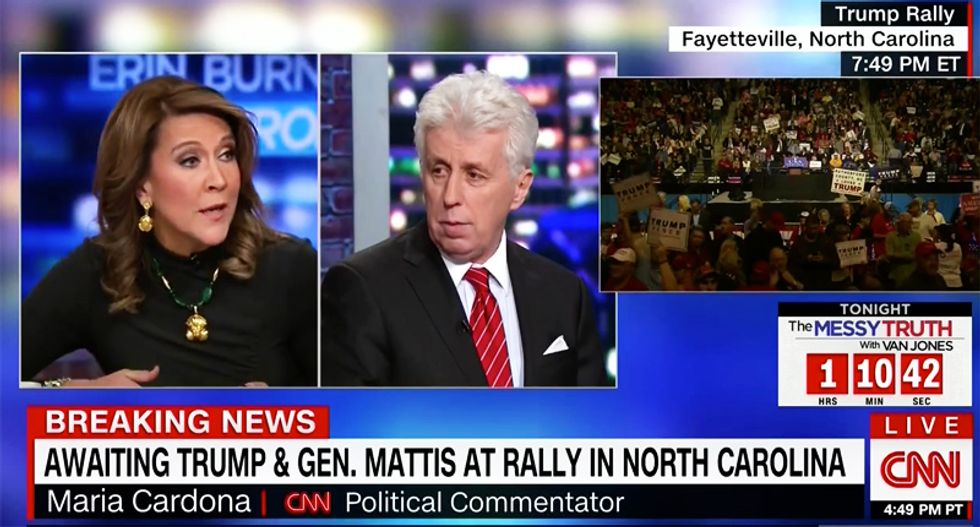 During a CNN panel discussion on a speech to be given at Texas A&M University by white supremacist Richard Spencer, political analyst and Donald Trump defender Jeffrey Lord set off a firestorm after claiming "there are no people of color in this country."

Lord began by dismissing Spencer and his white supremacist followers saying they have nothing to do with Trump's campaign despite their well-known affinity for Trump's racist rhetoric.

"This guy [Spencer] is so far on the fringe of American politics. He has nothing do with Donald Trump. I don't care how much he talks about it. And Donald Trump doesn't want anything do with him," Lord said.

Addressing Trump's vague disavowal of the white nationalist movement that supports him, it was pointed out that "People of color who are watching take a different perspective--" only to have Lord interject.

"There are no people of color in this country, "Lord bluntly stated. "There are only Americans."

Panelist and Clinton supporter Maria Cardona then unloaded on Lord.

"Jeffrey, the reality is the following," she began. "You as a white American have had a very different experience in this country than me as a Latina. I'm sure people do not come up to you to say you should be deported, your children should be deported because they're anchor babies."

After a smirking Lord told Cardona, "Your party has yet to apologize for slavery," she continued saying Trump needs to address racism head on.

"Until he does that, you will have Latinos, African-Americans, Muslims, everybody who felt degraded by his campaign say he is not the president of them," she stated.

Former federal prosecutor Joyce White Vance spoke to MSNBC's Nicolle Wallace about the recent filing to appeal the 11th Circuit Court's opinion to allow the Justice Department to continue its work on the investigation of the theft of government documents.

Justice Clarence Thomas is the one who generally oversees the 11th Circuit, but Vance explained that folks shouldn't read too much into that.

GOP Senate nominee Herschel Walker is making it difficult for Republicans to unite around his candidacy as the former NFL player's campaign stays bogged down in scandals.

Walker's situation got worse on Monday when an abortion receipt, get-well card and check were published by The Daily Beast after it interviewed a former girlfriend who said Walker paid for her abortion.