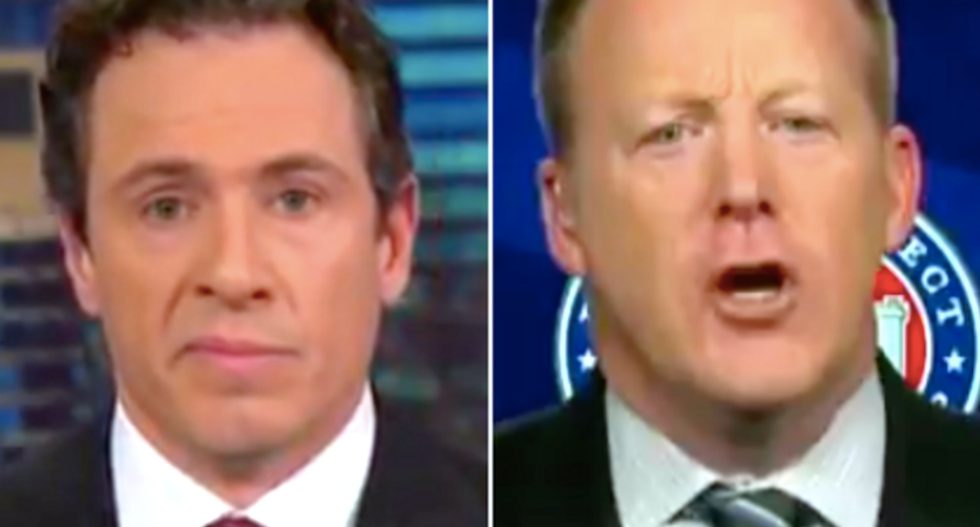 Sean Spicer, the RNC strategist who's advising the transition team, said Trump has been "unbelievably transparent" about his business dealings and the roles of his children in his administration -- but he suggested that shouldn't even matter.

"The American people have understood exactly what they're getting, and they voted overwhelmingly for him," Spicer said Thursday. "He has been very clear about what he owns, the role of his family and everything else since he announced that he was running for president -- and they overwhelmingly elected him with all of that on the table."

Spicer suggested reporters were trying to delegitimize Trump by "combing through certain documents," but he said the president-elect had only grown more popular since his election.

"Not only have they elected him, but they've become more and more pleased with the job that he's done, and he hasn't even assumed the office yet," Spicer said.

Cuomo stepped in to correct Spicer on nearly every point he had just made.

"We know that more people are concerned about his business dealing than who are not, we know that his approval rating is low compared to where other president-elects have been at this point -- but let's dismiss the polls," Cuomo said. "You said they overwhelmingly voted for him. There is no definition of overwhelming that would meet this statistical criteria."

That's when Spicer decided to move the bar, arguing that Trump's victory should be considered overwhelming because he overcame extremely low expectations about his chances to win.

"How is that relevant?" Cuomo asked. "He lost the popular vote by millions, but he won. I'm not disputing that, and I know you like that as a distraction -- but I'm not giving it to you today."

Cuomo then steered the conversation back onto the tracks.

"Transparency is woefully lacking where it matters," Cuomo said. "We do not know what the business dealings are for the kids or for Trump, and you were supposed to tell us (Thursday) -- and you delayed it."

Spicer paused for a moment to regroup.

“First of all, we have been unbelievably transparent,” Spicer said. “We have literally brought the press into meetings. We’ve listed the kids and Jared [Kushner] on websites."

Cuomo said the transition team had only revealed what they wanted the media to know, but he asked Spicer what Trump and his advisors were hiding.

Spicer bragged about the camera set up near the elevators in Trump Tower, which show all the celebrities and others who are going up to meet with the president-elect.

"That's great," Cuomo said. "Are any of those people in business with Donald Trump right now?"

Spicer, again thrown for a loop, said Trump had focused more on his transition that his business since his election last month.

"Mr. Trump has some of the most iconic properties throughout the world," Spicer said. "He has put his entire focus on building a cabinet, which you've seen, which you would note he's almost entirely finished with. He's by far ahead of where every modern American president has been. These are world-class people, every single one of them. You name them, boom-boom-boom -- from the EPA to the Department of State to the Department of Interior, these are the best and brightest."

Spicer said Trump had been too busy to prepare for the promised news conference on his business dealings, which has now been rescheduled for next month.

"He realized after talking to lawyers and accountants that it was going to take a little more time because he put his focus on the American people and having a government upright," Spicer said. "But he will get it done, it will happen in January, we'll all be good -- I promise you on that."

.@ChrisCuomo to @seanspicer: Transparency is woefully lacking where it matters most. Spicer replies: "We have been unbelievably transparent" pic.twitter.com/gNQmrZ6FU0