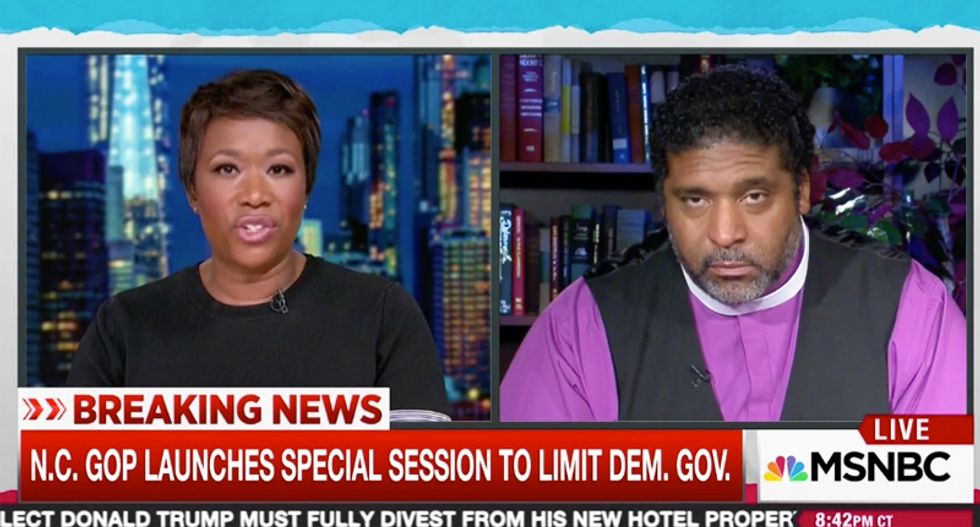 As Reid explained, the Republican GOP majority convened a special session to deal with disaster recovery, only to turn around and propose bills that would cut incoming Gov. Cooper's staffing from 1,500 to 300 while making his cabinet appointments subject to approval by the GOP-controlled state Senate.

"You have Governor Pat McCrory refusing to concede the election, fought it in every way he could," Reid said to Barber. "But you now have the Republican legislature, the house and the senate attempting to essentially make the governorship not worth having and take all the powers of the governor because a Democrat will have it. What on Earth and what are you guys doing to combat that?"

"Well, you know, this is extremism gone amuck," Barber said. "These folks are not even Republicans. They're on some other world. I mean, my great-grandfather was a Republican. They are just power hungry. I just got a report that they have now entered 15 bills -- mind you they came in saying they were concerned about people who were in the floods -- but all that was a cover. They introduced 15 bills, one of them actually changes the makeup of the state boards of election and the county boards of election because currently whoever gets elected, the governor, whatever party he's in, that's how the makeup of the local boards look like."

"We're pushing back hard," he continued. "This is also why, Joy, we need the Voting Rights Act because some of the stuff they wouldn't be able to do in a pre-clearance state. We're even considering civil disobedience. I'm on the phone tonight about that because this is just wrong. I call on all national media to get down in this state because the most regressive extremist stuff is happening in our state and this is extremism gone amuck. It's ugly, it's mean spirited, it's unconstitutional and undemocratic."