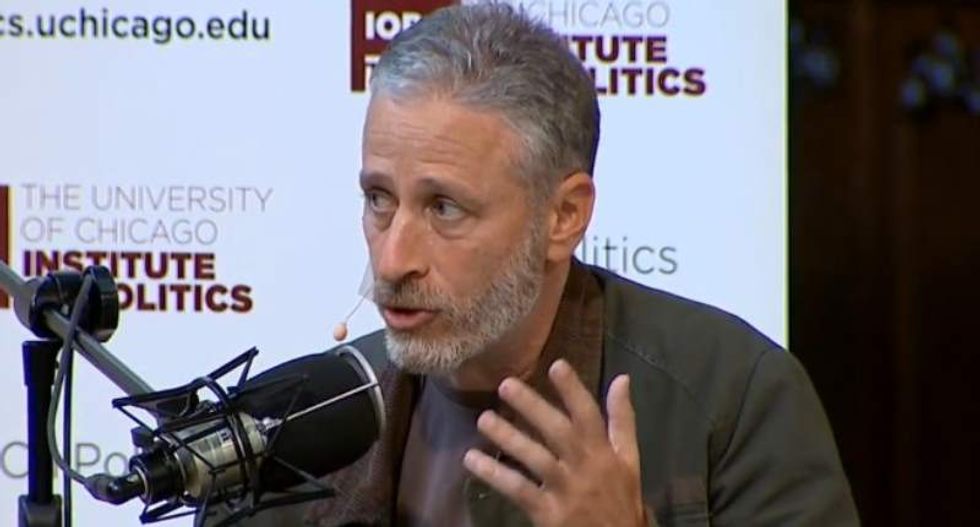 Former 'Daily Show' host Jon Stewart talks to David Axelrod during an interview on May 9, 2016. (University of Chicago)

It's been over a year since "Daily Show" genius Jon Stewart walked away from his war against bullsh*t and as the 2016 Election post-mortems play out, Stewart cut through the noise to talk about the new President-Elect.

“It is odd to be in a position of knowing that the leader of the free world tweeted that you were a p*ssy at 1:30 in the morning,” Stewart said at his latest TimesTalks appearance.

But while many are quick to blame Hillary Clinton's loss on racist and sexist voters, Stewart disagreed.

“Not everybody that voted for Trump is a racist,” he explained. “I don’t give a f*ck what any of you say to me. You can yell it at me, you can tweet it at me. They’re not all racists. Or they’re not giving tacit support to a racist system ... We all give tacit support to exploitative systems as long as they don’t affect us that badly.”

Stewart mentioned a conversation he had with someone who said that not all Trump supporters are racists but his supporters "are giving tacit support to a man of racist language." He explained that many Americans are complicit in supporting things that hurt others, asking the person to pull out his iPhone.

“I was like, ‘Guess how those are made, guess who makes them?’” Stewart said. “'Oh yeah, but that’s ...' What? What is it? It’s not different, we all do that. All of our shit stinks and getting beyond that takes incredible work.”

"A sh*tload of them voted for Trump," Stewart explained, according to a Huffington Post transcript. "The same people that voted for Trump ran into burning buildings and saved whoever the f*ck they could no matter what color they were, no matter what religion and they would do it again tomorrow. So, if you want to sit and tell me that those people are giving tacit approval to an exploitative system ― I say, 'OK, and would you put your life on the line for people who aren’t like you? Because they did.' I get mad about this stuff."

But Stewart wasn't giving Trump a pass. He said that Trump's campaign painted Clinton as "an unqualified Secretary of State because the way she handled classified material. His selection for Secretary of State will be David Petraeus, who pled guilty to mishandling classified material. He said she was unqualified because she gave a speech to Goldman Sachs. His Secretary of the Treasury is somebody from Goldman Sachs. We’re in post-accountability.”

“Let’s look out for the losers,” Stewart said. “Having somebody you agree with have greater control over the levers of power might be a comfort, but it’s not a solution. Unfortunately, I think our expectation now is, ‘Oh, great, one of our team is in charge. I don’t have to think about this anymore.’ And I think it’s never actually been the case.”

Stewart was also furious about the media turning to focus on the horserace of 2020 while avoiding talking about policies the American people want to see.

"They don’t give a flying f*ck about governance, they care about campaigns and that’s where the fun is for them. That’s devastating," Stewart confessed. "And not only is it devastating news-wise, it’s devastating to all of us. Because if a campaign is too long, the fault lines between different tribes in our societies solidify. A campaign is 18 months long and you’ve got to choose a side for 18 months and then a disagreement becomes an argument and an argument becomes a fight and a fight becomes a feud and a feud becomes a war."

“Have you ever been in a parking lot after, like, a Giants game and it’s between a guy in a Giants jersey and a guy in, like, a Cowboys jersey? They will fight," Stewart described. "They will punch each other. What is that fight? Like, ‘Hey! Your shirt, it’s got a star on it. It’s supposed to have an NY. I’m going to have to punch you in the face.’ There’s no reason for that, other than basic human primitive nature, and if we turn our discourse into that, then that’s what it will become.”

He wants it to stop, saying that not all teams are perfect and the others are not all demons. "And this is not like a Kumbaya, let’s all get along," he said. "Let’s f*cking fight, but let’s fight with precision and integrity, and not with just demonization."

While Stewart led a nation into calling out Fox News and the right-wing candidates it promoted, he admitted that satire wasn't what will change government — only activism will.

"We were the destroyers of men," Stewart said about "The Daily Show." "And creators of empires. I think that generally is satire’s role and has always been. The rise and fall of civilization at our whim."

"I think of one of the lessons of this book and what we’re talking about is to put satire and culture in its proper place," Stewart said of the new book The Daily Show: An Oral History. "That controlling a culture is not the same as power. And that while we were all passing around really remarkably eviscerating videos of the Tea Party ― that we had all made great fun of ― [they were] sitting off a highway at a Friendly’s taking over a local school board."

He also noted that he didn't think President Obama was the perfect president the left wants to believe that he was.

"Obama has been in office for eight years and I don’t know about you, but it seems like there’s still sh*t to do," Stewart said. "And there’s a lot of shit that I didn’t agree with. I thought they were terrible for press freedom. I still am not quite sure I understand a centralized policy of spying and droning. Like, I don’t know."

He specifically cited the deportations that went up under the Obama administration.

"That was real and whether we took comfort in the fact that he was one of the good guys that did that, real people paid a price for that," Stewart said. "And you have to care about that, even if it’s one of your guys that did that."

He cautioned people to put Trump in perspective. Eight years ago people were optimistic about Obama's administration but acknowledged that nothing was perfect. The same can be said for Trump where not everything will be all bad.

"But there will be real ramification to this election," he said, encouraging people to find those who are the most vulnerable and help them.

"If [Trump] tries to deport dreamers, then that’s where everyone has to go, to protect them," Stewart said. "If he tries to make a Muslim Registry, then everyone has to go there and help them. You have to find the people that are going be most in jeopardy, I think, and put your attentions on them because now it’s about reality."

But, he explained that we are still the same country. "Obama didn’t change and fix everything and Trump can’t ruin everything. If we’re that vulnerable to one guy, that guy — that’s how we’re going out? This incredible experiment in liberty and democracy that we fought and died for is going to go out ― with that guy. That can’t be how this story ends."

He's still optimistic because he sees how much better our country is than when it first began. He urged people not to get stuck in the liberal bubble, though.

"In the same way that I hated ― Sarah Palin used to do this all the time ― 'Out here in real America.' There’s no real America. It’s just, it is what it is. Generally, people are just trying to get to work," he said.

Stewart closed by saying that nothing is ever easy. "F*cking buckle your seat belt and get ready," he said. "And I think the key for us is to be like, who needs a ride?"