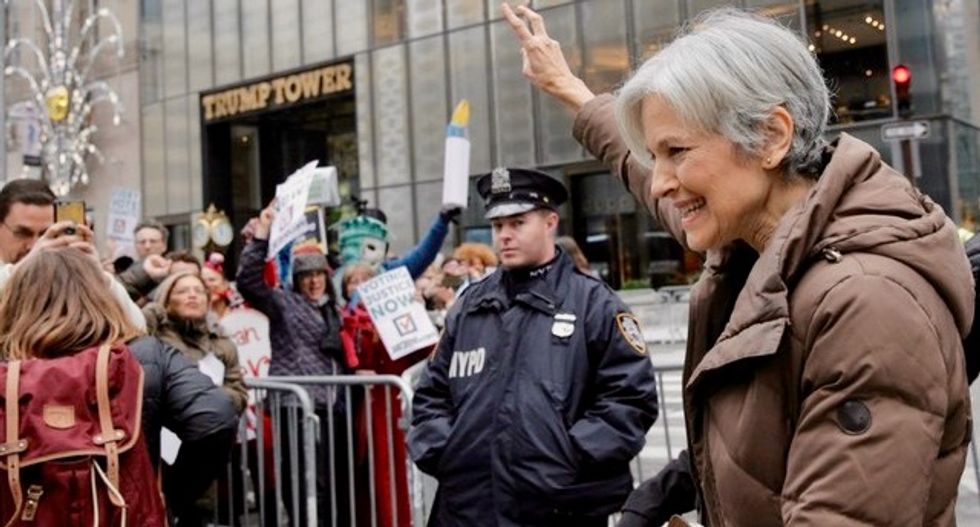 Green Party supporters rallied in freezing temperatures in Michigan's capital on Thursday and urged its high court to revive a recount of presidential votes in one of three states where the party wants ballots re-examined.

About 50 people marched in a circle for about an hour in front of the Michigan Supreme Court, where Green Party presidential candidate Jill Stein has asked the justices to hear an appeal. As a light snow fell, they beat on pots and pans and shouted, "Come out of hiding and start recounting!"

Even if recounts were completed in Michigan, Pennsylvania and Wisconsin as Stein has asked, however, they would be extremely unlikely to change the outcome of the Nov. 8 election in which President-elect Donald Trump, a Republican, defeated Democrat Hillary Clinton.

Although Clinton won the national popular vote, she lost to Trump in the Electoral College, the 538-person body chosen state-by-state that actually selects the president. Trump, who won a projected 306 electoral votes, takes office on Jan. 20. Stein won no Electoral College votes.

A recount is ongoing in Wisconsin, where a federal judge has scheduled a hearing for Friday in a lawsuit by Trump's supporters who wish to halt it.

In Pennsylvania, a federal judge is scheduled to hear arguments on Friday in a lawsuit brought by Stein asking to begin a statewide recount there.

A federal judge on Wednesday halted the Michigan recount in its third day by siding with a state appeals court that found Stein did not have grounds to mount the challenge. Stein said the recount was aimed at reinforcing the integrity of Michigan's voting system, while Trump supporters called it a waste of money.

Looking at paper ballots is the only way to ensure voting machines were not hacked, Alex Halderman, a University of Michigan computer scientist, said at Thursday's rally.

"I know Michigan's voting system can be hacked. The only security measure Michigan has is the paper ballot," he said.

The state's Supreme Court could rule at any time on Stein's appeal. Stein has also asked two of the court's justices to disqualify themselves because they are on Trump's list of potential U.S. Supreme Court nominees.

Federal law requires states to resolve disputes over the appointment of Electoral College voters by Dec. 13.