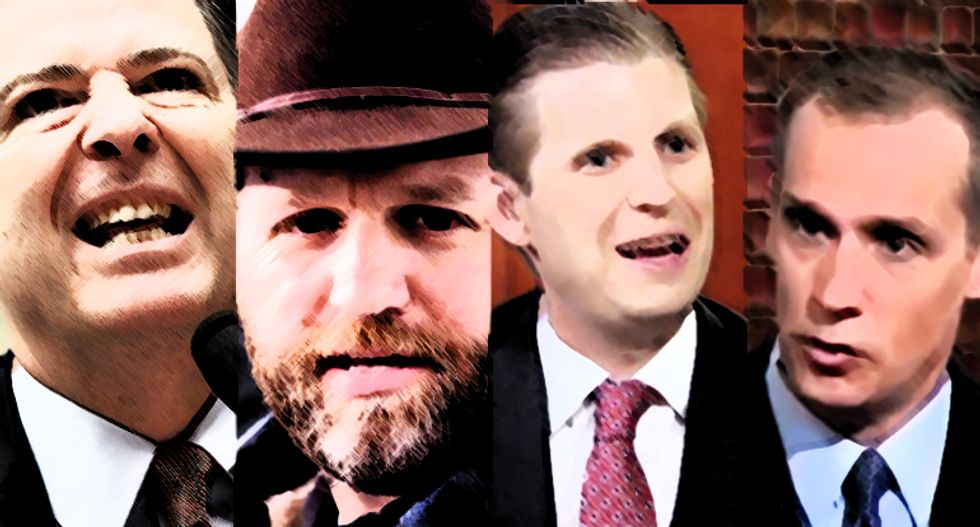 What an awful, terrible, horrific year it has been; starting out with so much promise and ending up with this, the most punchable of faces: 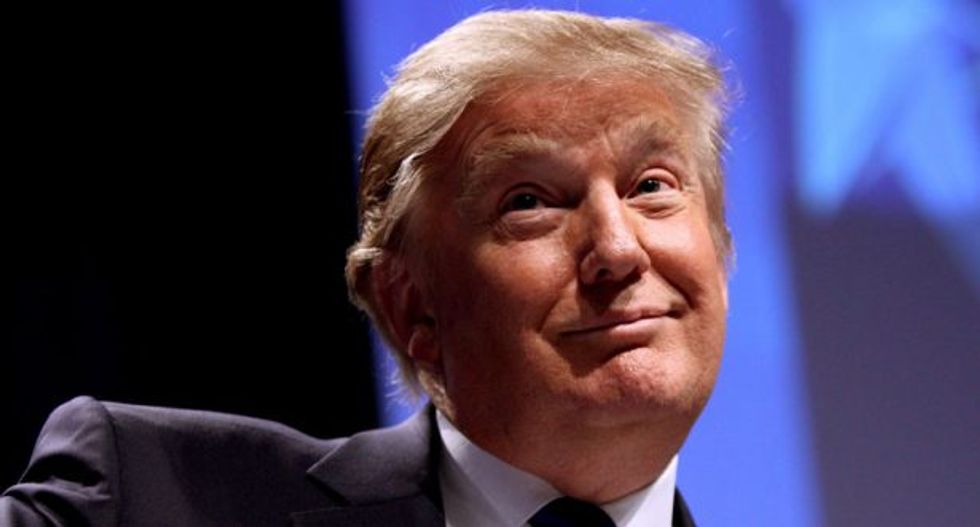 It was year of great losses as we watched people who tried to make the world a better place leave us, one Facebook news alert at a time.

Combined with the rise of Trump, this makes us so stricken that we are stuck at stage two of the five-part grief cycle.

As we have pointed out before, we don't advocate actually punching someone because it is wrong and illegal and stuff like that, but that doesn't mean that we don't sometimes see someone on the TV and think, "Man, I'd like to see someone knock the crap out of that guy. Just totally put him on his ass by punching him in his big stupid face."

So it can be very cathartic to, at the very least, make up a list of people who are completely deserving of decking.

Which brings us to this years most deserving candidates.

Now obviously not everyone who is in need of a good punching can be listed here because the internet is finite, or so I hear. But we have managed to narrowed it down and please accept our apologies if your fave didn't make the cut.

As you will no doubt notice, there are no women on the list because we don't talk about hitting women even in jest.  So if you're looking for one of a bevy of sociopathic dead-eyed Trump blondes (and Katrina Pierson) who inhabit the cable shows, you'll have to look elsewhere. And shame on you.

Once again, and I can't emphasize this enough: Don’t hit people, but feel free to fantasize.

For example, let's start with these two: 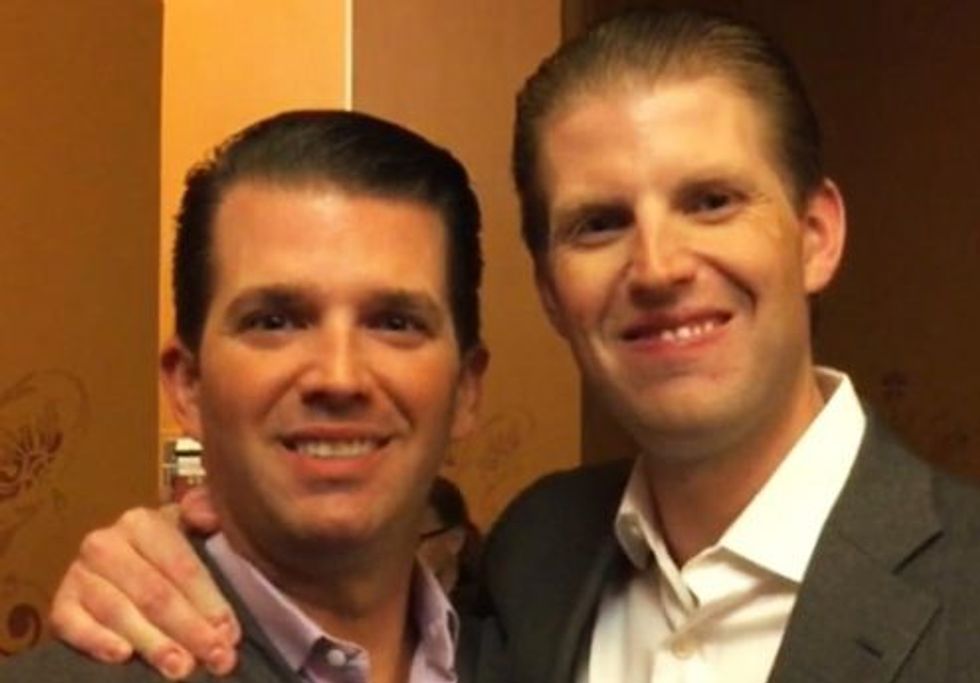 Crimes against humanity: The two who wake up in a city that doesn't sleep to find themselves king of the hill, top of the heap, got there by being smart enough to have been born to another wastrel who was born into money. Because their dad was elected president (and seriously America, how much meth did you smoke last year?) we're going to have to put up with them for the next four years with their dim-witted smirky faces, their "American Psycho" hairstyle and fashion sense, and the fact that both of them married what appear to be downmarket fashion knockoffs of their sister (Ivanka, not the other one -- the not-Ivanka one) and there is certainly nothing creepy about that. No siree. Nope. 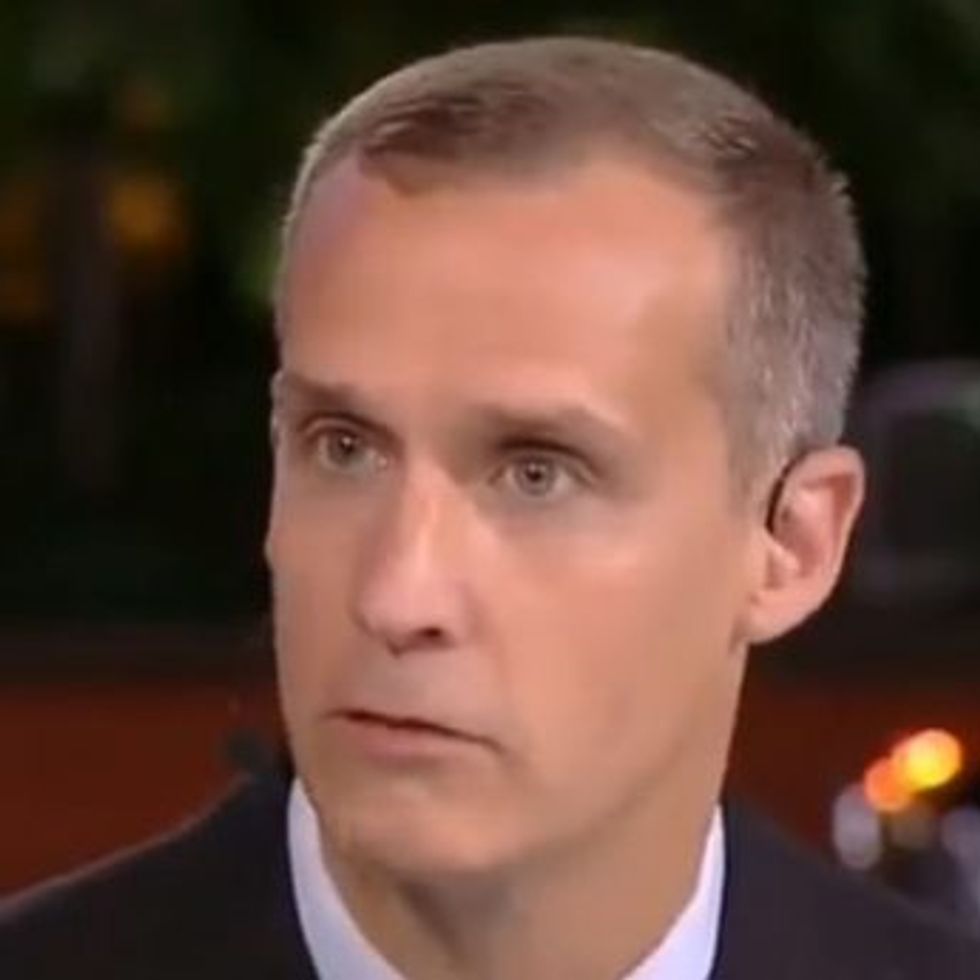 The face:  The look of a man about five seconds before he backhands a woman for folding the bath towels wrong.

Crimes against humanity: Trump had many defenders on CNN, but none who exhibited quite so many warning signs that normally indicate rabies. He assaulted a Breitbart reporter and eventually got fired by Trump, making him immensely desirable to CNN -- where we assume he was shackled to his chair to keep causalities to a bare minimum.

The face: Nothing personal, it's business, you stupid rubes.

Crimes against humanity: Speaking of CNN and feral badger Corey Lewandowski, Zucker turned his network into a halfway house for Trump advocates out of whose mouths every word was a lie including "the" and "and" (thank you Dick Cavett). Why did Zucker do this? First of all, Zucker had a relationship with Trump dating back to when brought him to NBC.  Second: ratings, baby!  CNN had a record year by turning late-night cable shows into shoutfests between political professionals and Trump advocates who had all the charm and smarm of a Breitbart comment section made flesh. Zucker made bank by turning campaign coverage into the worst and most artificial reality show ever. 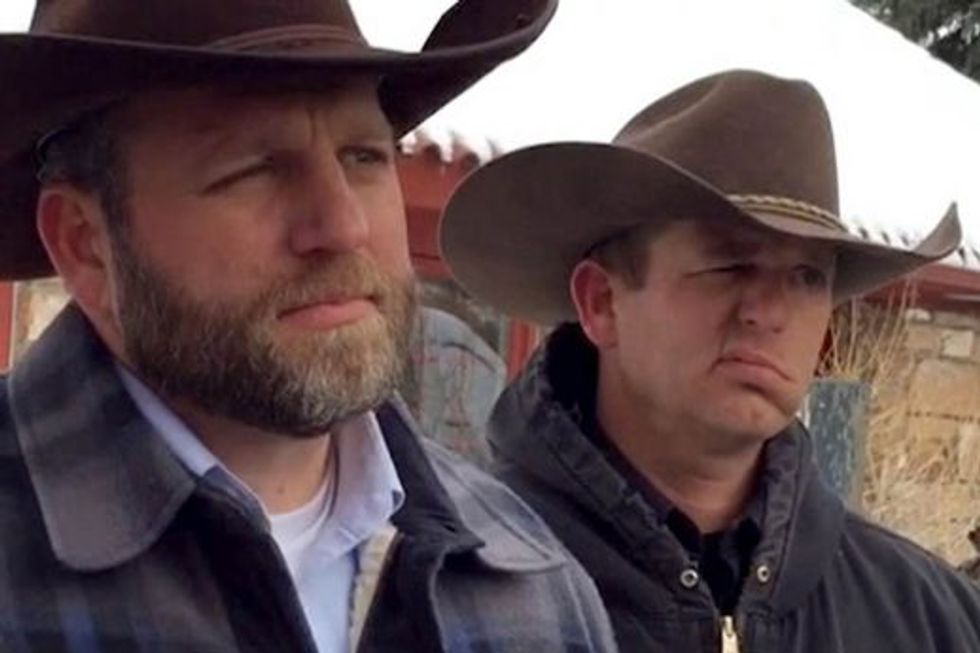 The faces: Okay. Get your "looks like someone already beat me to punching Ryan Bundy" jokes out of the way. Ryan Bundy's face looks that way because someone ran over his head -- which may explain some of his other issues.

Crimes against humanity: Not content to steal government property in Nevada, the Brothers Bundy moseyed on up Oregon way to occupy a bird sanctuary because ... why not? Along the way they attracted a motley assortment of gun nuts, survivalists, pocket constitutionalists, ne'er-do-wells, petty criminals and assorted goofballs who like to video themselves delivering lectures on the Federalist Papers while sitting in an Isuzu Trooper in a T.J. Maxx parking lot while their wives are shopping. Just like the Founding Fathers did -- you can look it up. And just like the Founding Fathers, they were too stupid to remember to bring along snacks (and tampons) and had to go begging.  41 days later -- and at a cost to taxpayers of over $6 million -- they were arrested, then tried and managed to walk free because the government found 12 people to put on a jury who wereeven dumber than the Bundys. Maybe we're thinking about punching the wrong people here...

Crimes against humanity: For reasons known only to him, Comey used his position to give Donald Trump a helping hand by placing his thumb on the election scale 10 days before voters went to the polls, all the while as he was hiding evidence of Russian meddling. Two days before the election Comey went "Whoopsie-doodle! My bad. Nothing to see here. Carry on. No harm, no foul."  Only now is he admitting that the Russians were dicking around with the election,  but the damage (Trump) is done. Ass.

The face: The face of the man wearing the boot that is stamping on a human face — forever.

Crimes against humanity: When Fox News needs someone to yell at black people -- and Bill O'Reilly is otherwise occupied -- they call on Milwaukee Sheriff Clarke to accuse them of joining up with ISIS or being worse than the KKK or some-such thing that makes perfect sense to your average Fox News consumer -- who are all morons, by the way. Clarke's default setting is "belligerent" with delightful undertones of authoritarianism. When he's not yelling at black folks, he's looking the other way while people die in his jail and threatening medical examiners for being all smartypants and stuff by doing their jobs. 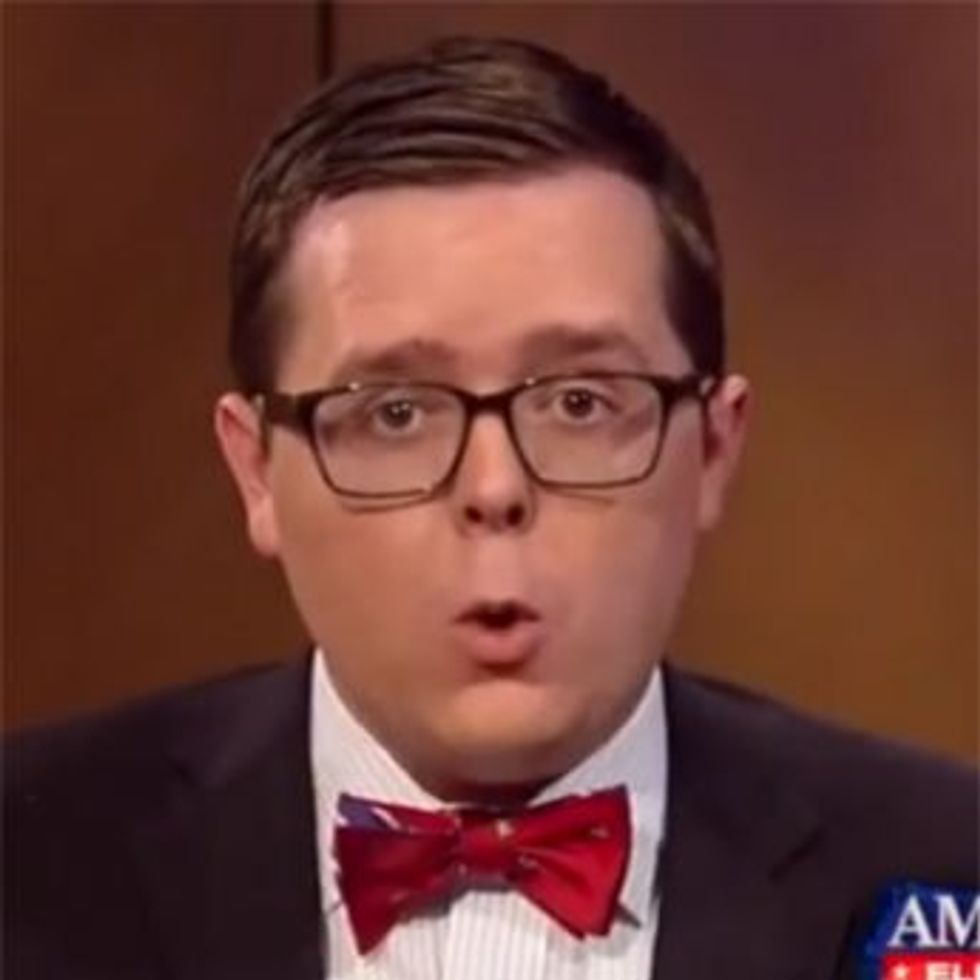 The face: Evil -- but harmless -- face of a creepy puppet.

Crimes against humanity: As if the bowtie affectation isn't enough to make you want to smack him glass-less, Hill has parlayed his questionable "I'm a former 'Millennial for Bernie' who now loves loves loves Donald Trump so goshdarned much" schtick into a semi-lucrative cable TV career. No one really knows where he came from -- in fact, he's not even interesting enough to research, so we'll assume he was incubated in a test tube somewhere by the Koch brothers, although he looks a tad undercooked.

The face:  That wide-eyed look of innocence that is the main reason why many serial killers escape detection.

Crimes against humanity: Ryan did everything he could to avoid Trump before the election, but now has embraced him wholeheartedly even saying he doesn't give a crap if Putin personally installed Trump in the White House.  There seems to be a deal worked out between Trump and Ryan that will allow the president-elect to use the White House to enrich himself further while Ryan is given free reign to destroy the social safety net and kill off a bunch of poor "takers," like old people who depend upon Medicaid.  Ryan is going to show those slackers what the "dead" in "deadbeat" means. 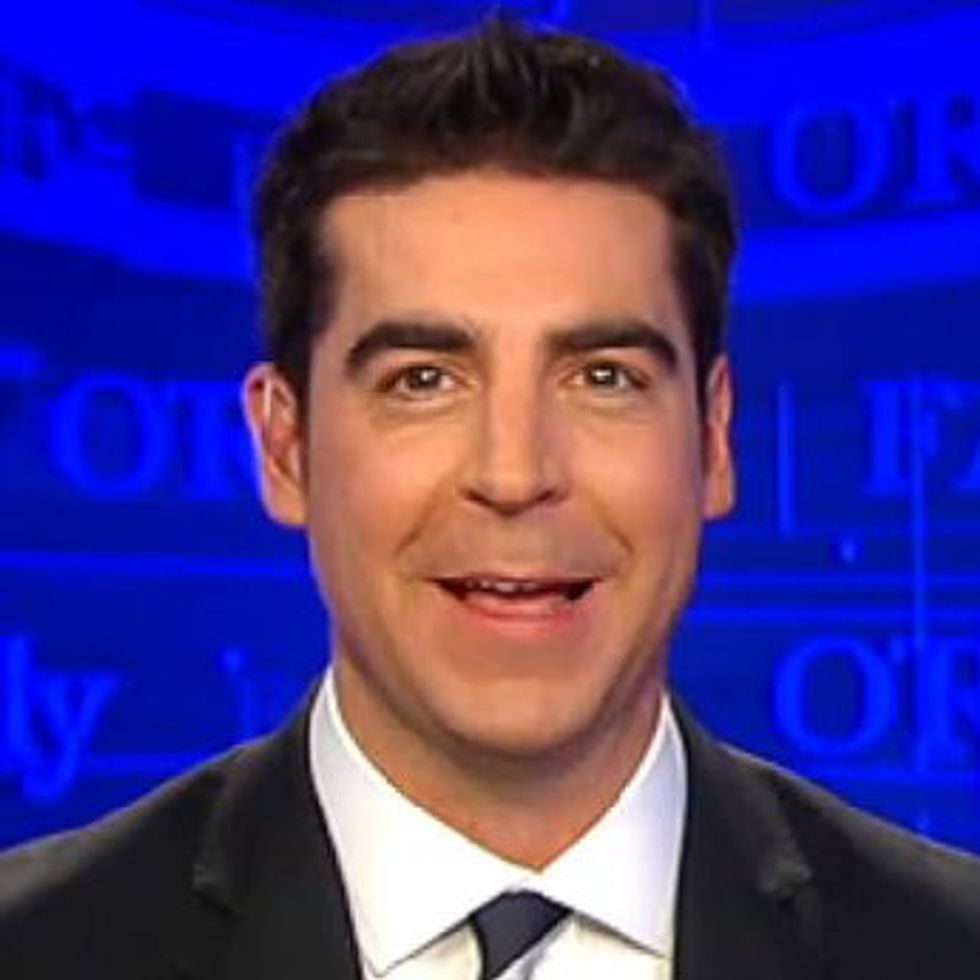 The face:  The smirk of a frat boy who is going to get away with date rape because his parents make large donations to the university.

Crimes against humanity: Under normal circumstances, Watters would be deserving a smack in the face for possibly the most racist thing Fox News has ever produced -- and stop for a minute and ponder how much stiff competition there is for that title. But ... no. He's on the list because: look at that smirk. If an advanced alien lifeform visited Earth to teach us about peace and tranquility everlasting, it would probably smack Watters upside his his stupid head with a flipper or whatever creepy appendage it had at hand, because, really, look at him. 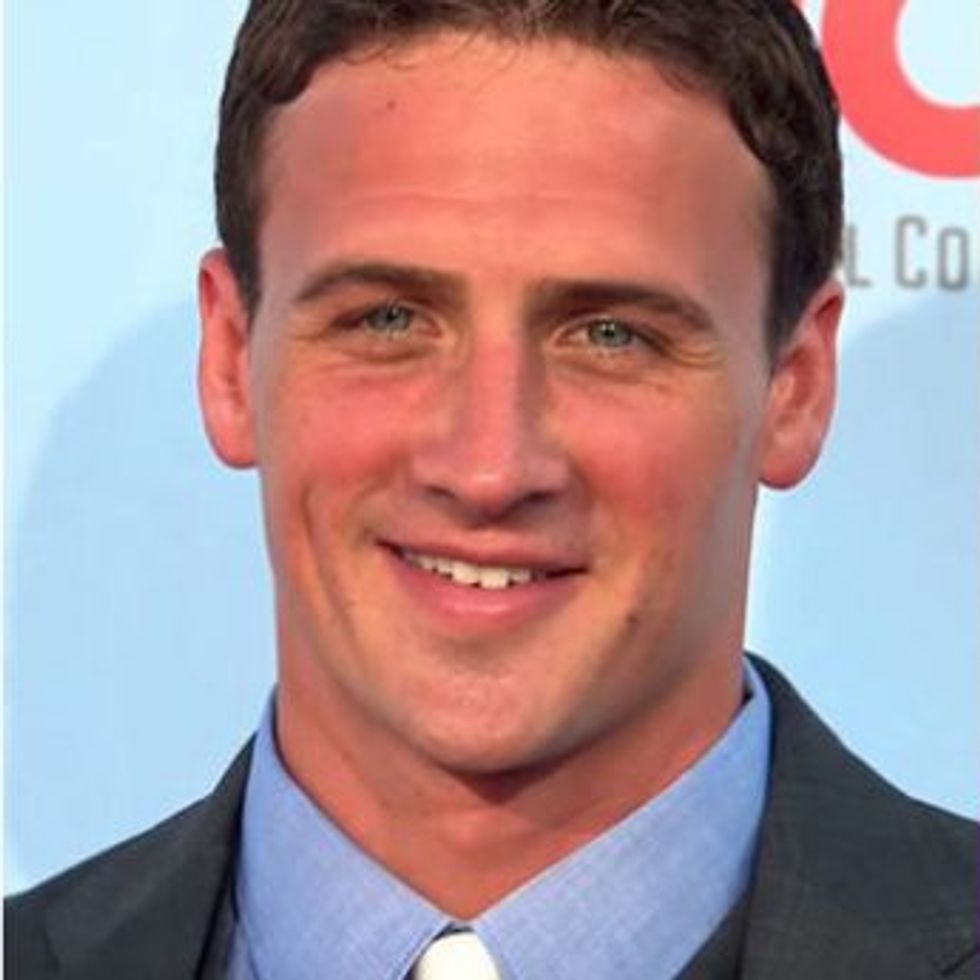 Crimes against humanity: Like a goldfish, only dumber, Lochte excels at one thing: swimming. He's Zoolander with gills who is fortunate to live in a country that prizes athletic skill and faux patriotism over ephemeral things like the ability to speak and tie one's own shoes. Lochte already proved to be too stupid to be a successful reality show star -- which is quite an achievement in and of itself -- but he was given another bite of the reality apple after using another Olympic star turn to go from medalist to lying sack of ugly American by making up a BS story being robbed in Brazil. For this he was rewarded with a spot on Dancing With The Stars -- the TV version of Island of Broken and Dumbass Toys. As Lou Holtz once said: "God looks after children, animals and idiots." 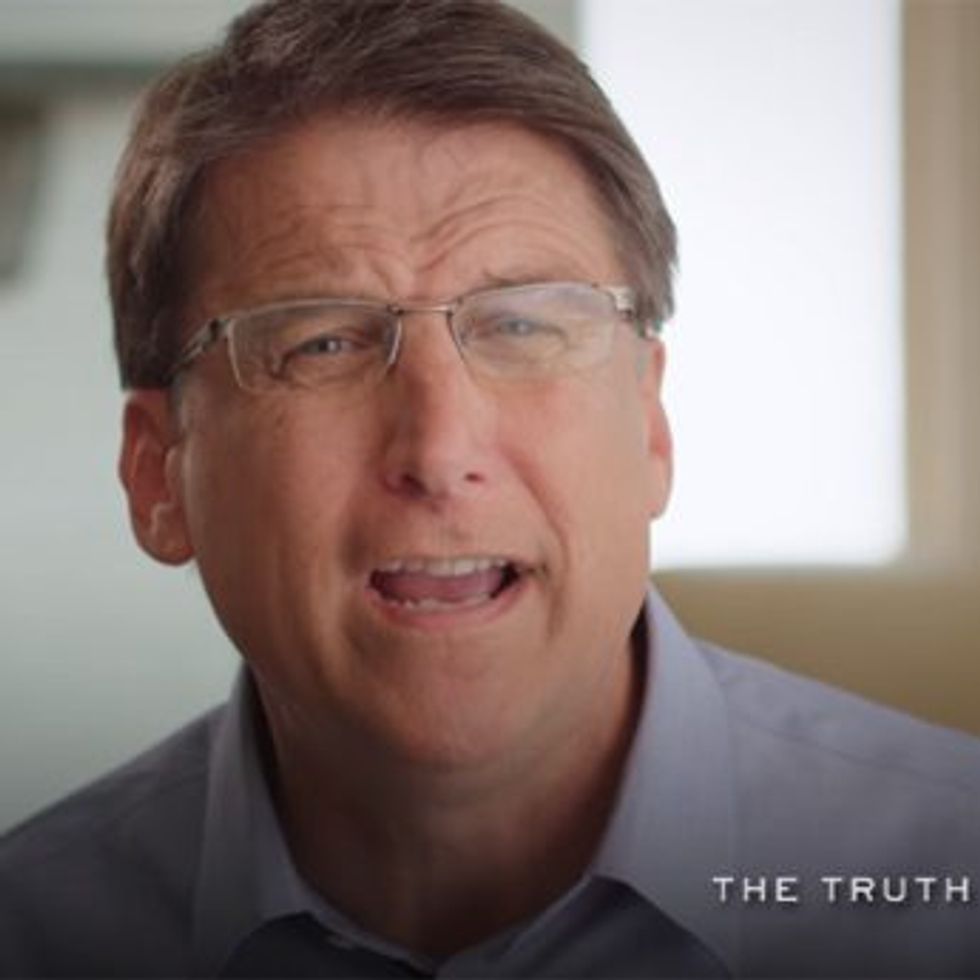 Occupation: Outgoing North Carolina governor, paruresis sufferer if anyone in the LGBTQ community is within a country mile of him when he has to pee.

Crimes against humanity:  Not content to cost his state hundreds of millions of dollars in lost revenue because he’s obsessed with bathrooms, McCrory is the sorest of losers in a year when Republicans did quite well. After finally admitting that he got beat, he turned around and helped his state party gut his old job because he's a bitter, homophobic, racist jerkface. 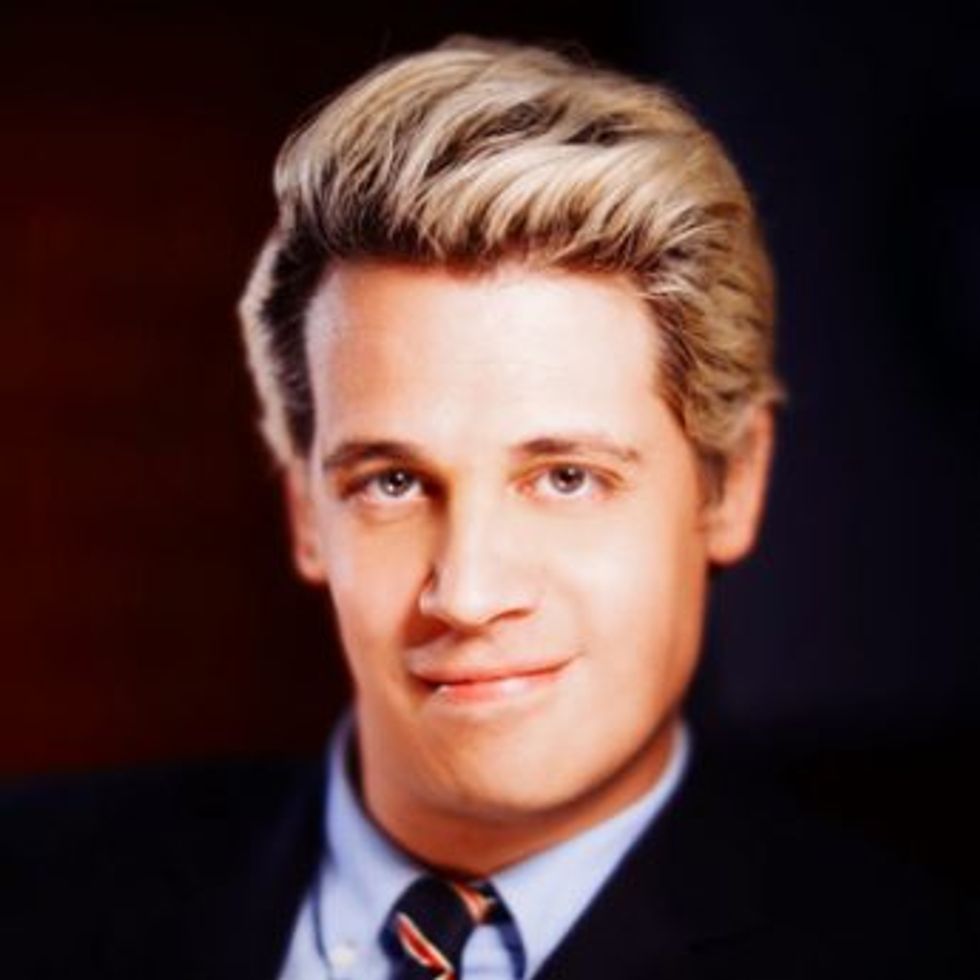 Owners of punchable face: Milo we can't even be bothered typing out his last name because no one cares anyway.

The face: The banality of banality.

Crimes against humanity: I'm loathe to even include him because giving him any of the attention that he so desperately and frantically craves goes against every fiber of my being. Like Piers Morgan, Milo is proof that Americans are so enamored by an English accent -- believing it to be a sign of uncommon intelligence -- that even if what comes out of  their mouth-hole is content-less bullshit, the hicks are still dazzled. Milo's schtick is going on college campuses and saying things like "feminism is a cancer" because, wow, super transgressive, man. Oh, he's also gay and, like, a vegan, he mentions it every possible chance he gets because I guess that's still thrilling to his neo-Nazi pals until they do a little deeper research into what those pink triangles meant. Then things will turn real dark...