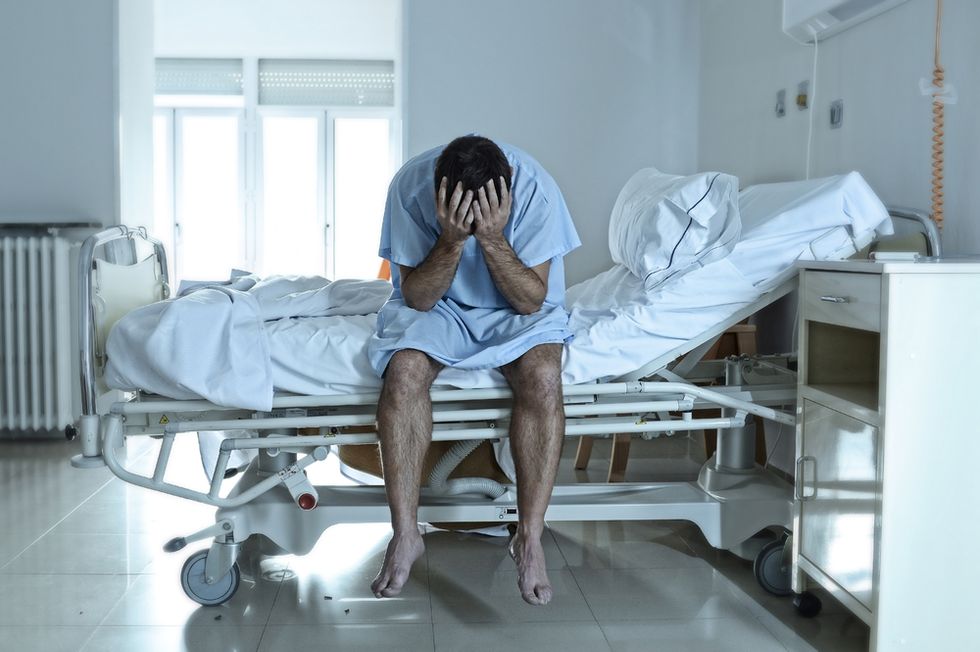 A worried patient sits in a hospital bed (Shutterstock)

The Republican Party has been itching to "repeal and replace" Obamacare for the past six years -- but despite having all that time, it still hasn't come up with a concrete replacement plan.

Because of this, the Republican Party is implementing a strategy of "repeal and delay" -- that is, vote to repeal the bill, but delay the overall effects of repeal for three years while they work to concoct a suitable replacement.

In theory, this should mean that people who now benefit from Obamacare subsidies should be able to continue buying coverage for the next three years. But in practice, this approach is very likely to create an unprecedented sh*tshow that will blow up in the GOP's face -- and, tragically, in the face of millions of Americans as well.

Here are five reasons the GOP's Obamacare repeal plan is going to be an absolute disaster.

Why? Because if you give the law a set expiration date, then young and healthy people are much less likely to buy insurance, thus leaving only the people who desperately need to have health insurance as the primary Obamacare customers.

In many markets, this will lead to insurance carriers fleeing the market, which will reduce options for consumers -- and those carriers who stay in the market will jack up prices even further to make up for accepting an even riskier pool of customers.

2.) Hospitals are already raising alarms about taking massive losses if the GOP just repeals Obamacare with no replacement plan. In letters sent out to elected officials this week, the American Hospital Association and the Federation of American Hospitals warned that they could suffer massive financial hits if the GOP repeals Obamacare and doesn't offer some kind of funding mechanism to help them cope with the costs of treating uninsured patients, as well as for losing Medicare and Medicaid payments that were cut as part of the initial legislation.

"To think about going through another dramatic, sudden, rapid change for an organization that teeters on being able to stay alive and provide services is gut-wrenching," Southeastern Health CEO Joann Anderson told reporters this week. "For us to be able to meet the needs of this community, we need to know what the replacement’s going to be."

There is an alternative to this that would let people with preexisting conditions get health care, of course -- a single payer system that Republicans would hate even more than Obamacare.

Regardless, any repeal of the ACA will necessarily involve hanging people with preexisting conditions out to dry -- and the GOP will have to take the blame for it.

4.) The GOP may be forced to conduct an insurance company bail out while they're writing a new plan. If the individual market starts to really fall apart during the repeal process, the GOP may have to figure out ways to bail out insurance companies to keep them afloat until they figure out some kind of comprehensive alternative to Obamacare.

As The Hill reported last week, "Republican congressional staffers are in talks with insurers about policies they could implement to help improve their financial situation in that interim period and prevent a breakdown in the market."

It goes without saying that the politics of the GOP giving insurers a bailout even as they vote to rip away coverage from millions of people would be completely disastrous -- but the GOP might not have any choice because the politics of letting the individual market collapse would be even worse.

5.) Democrats aren't coming to bail out the GOP. Republicans hope that by repealing Obamacare and then giving themselves a three-year window to come up with a new plan, they'll be able to get Democrats on board with support for something on the grounds that any alternative would be better than nothing.

The Democrats, however, aren't in the mood to play ball.

Senate Minority Leader Chuck Schumer (D-NY) tells The Washington Post that Democrats are going to oppose GOP efforts to repeal Obamacare, and will hang any subsequent problems with our health care system around the Republicans' necks after they go through with gutting the law.

"We’re not going to do a replacement," Schumer said. "If they repeal without a replacement, they will own it. Democrats will not then step up to the plate and come up with a half-baked solution that we will partially own. It’s all theirs."

And given that Republicans have already found it impossible to come to a consensus among themselves about what an Obamacare replacement would look like, they would desperately need to get Democrats on board to pass anything resembling a solution.

In other words: The GOP is setting itself up for a massive failure on health care policy, and it has nothing but itself to blame.